As originally published in Australasian Coin and Banknote Magazine November 2020 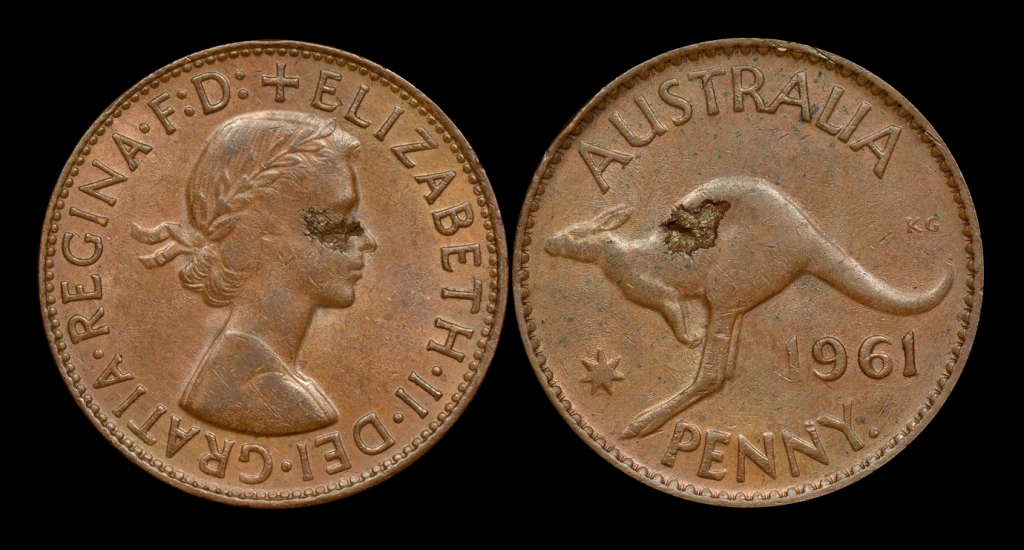 Not all coin errors that escape coin minting facilities are due to a failure in some part of the mechanical process of manufacturing coins. Sometimes the errors occur because of failures in the metallurgical processes that are required to produce the very metal that coins are made from. The image of the 1961 Perth minted penny shown has a clearly visible flaw caused by (for want of a better term) poor quality bronze.

Coins (generally) are made from metal blanks or planchets. Some of you might be wondering if there is a difference between a “coin blank” and a “coin planchet”, and indeed there is. However, that’s a subject we can cover another time and in this article we’ll use the terms interchangeably. Coin blanks are punched from strips of metal by a machine called a “blanking press”. Those strips of metal should ideally be of uniform width and thickness. Of course, the composition of the metal should also be consistent, but in the case of our 1961Y penny the metal strip the blank was punched from contained what is known as an “inclusion”.

On this coin the inclusion was a metal contamination that was probably an oxide, carbon, or something else like a nitride or a sulphide. The inclusion was embedded in the bronze and at some point while the coin was being made (or perhaps even after it was made) the inclusion has fallen out. On some errors of this type it is possible to determine if the inclusion fell out before or after the coin was struck, but in the case of this error we cannot do so.

A hole is visible right through this coin indicating the inclusion was a thick one. Errors like this penny with a hole through the planchet are very sought after and the bigger the flaw and wider the hole the more desirable they are. Sometimes you’ll see errors of this type with multiple inclusions and we’ve even seen some missing parts of the rim. They are an interesting error type and any serious error collector should look to add one to their collection!

These values are updated hourly using New York market prices. Coin values are purely the value of the gold or silver they contain and do not account for any numismatic value.
Prices Last Updated: 18:04 22 Jul 2021