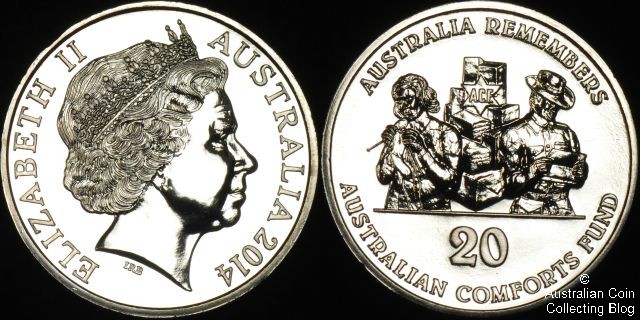 On the 25th April each year Australia celebrates ANZAC Day. Initially created to remember the Australian and New Zealand Army Corps soldiers who died at Gallipoli in 1915 now also remembers those who, in times of war throughout Australian history, have died whilst fighting for their country. There's so many stories that unfold around ANZAC time - some incredibly sad, some incredibly courageous, some incredibly heroic. But what about those stories that are just plain uplifting?

Have you heard about the Australian Comforts Fund?

In 1914, at the start of World War I, Australian men volunteered in their droves to defend the "mother country". Conscription at that time was denied to Australian women - however, they could either become involved in the nursing services or remain at home to tend to the children and manage family responsibilities - literally sitting it out! It's really only in modern times that women have been able to play a part in the armed forces. In fact, the involvement of women as part of the ANZAC movement wasn't really acknowledged until the 1970's.

Being frustrated and feeling "left out" lead Australian women to join forces and create the Australian Comforts Fund - a place where women could finally feel that they were, at least in some small way, contributing to the war effort.

The main aim was to provide and distribute "free of charge" home comforts and small luxuries to Australian men fighting overseas - items such as underwear; cigarettes and tobacco; shaving and personal hygiene equipment such as razor blades, toothbrushes and toothpaste; reading and writing implements such as pencils, paper and postcards; recreational items such as sporting equipment, gramophones and records; and even Christmas Hampers filled with plum puddings, small tins of fruit and cream. When the organization closed on 27th June 1946, more than 1.5 million Christmas Hampers had been delivered.

Socks in particular, were always in high demand and treasured as soldiers stationed in the muddy, damp and cold conditions of the trenches didn't have the luxury of washing or drying their socks. During the winter of 1916, 80 thousand pairs of hand knitted socks had been sent to the trenches and records show that more than 12 million mugs of coffee and tea had been served to the troops.

A range of lapel badges were developed which were sold via fetes, street corner collections and door knocks to raise funds. These lapel badges are now collectors items. And so successful was the Australian Comforts Fund that through it's fundraising, collecting, sorting and distribution efforts it soon overtook the work being done by the Red Cross - yet I bet you've probably never heard of the Australian Comforts Fund till now. 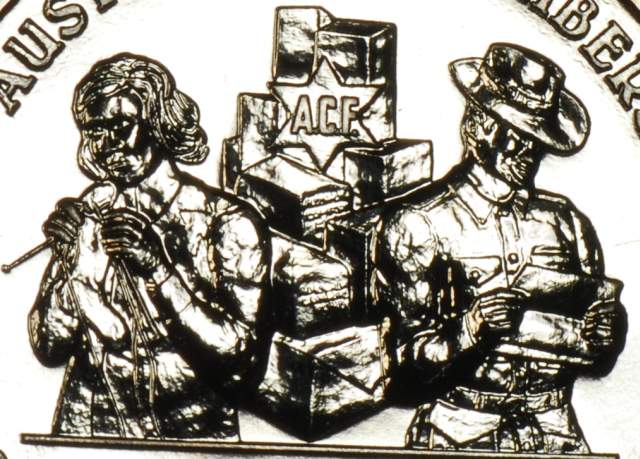 The 20 cents reverse design depicts the "life cycle" of items sent to the front - from goods being made, through to the badges sold for fund raising, through to packages ready for delivery, to items being received by the troops. The obverse depicts the portrait of Queen Elizabeth II designed by Ian Rank-Broadley. This copper-nickel uncirculated 20c is issued at $9.00 with a capped mintage of 30,000 coins being minted. It is a coin not intended for circulation but bears the same specifications of a circulating twenty cent coin at 28.52 millimetres diameter and weighing 11.3 grams with edge milling. 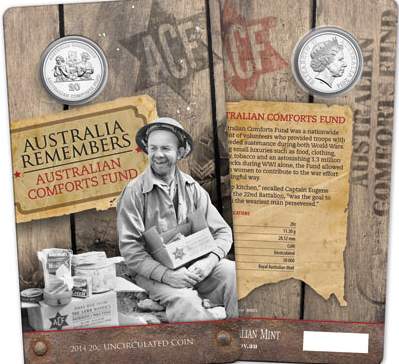 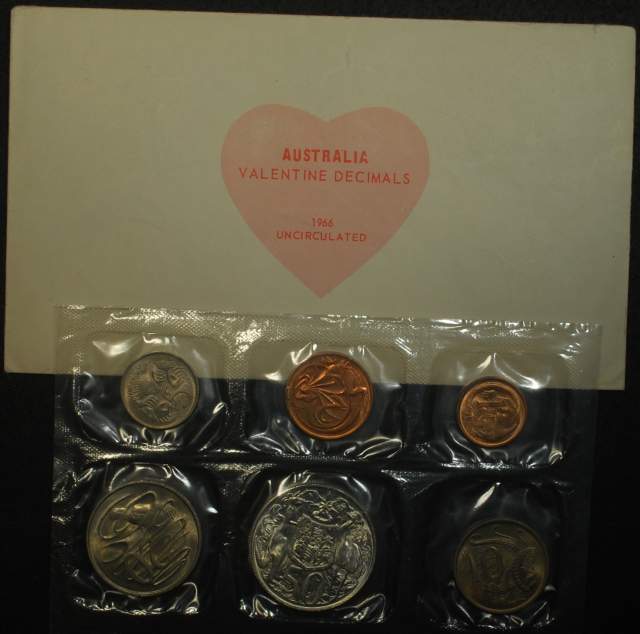 Today is Valentines Day but did you know it's also the birthday for Australia's decimal currency. 48 years ago Australia changed to the decimal currency system introducing the 1 cent, 5 cent, 10 cent, 20 cent and the round 50 cent piece along with paper notes, the $1, $2, $10 and $20.

Dollar Bill was brought in by the Decimal Currency Board to ease the public into the new system with major awareness and teaching campaigns. Do you remember what you were doing on the 14th February 1966?

One facebook member recalls "Sure do - was working at Ulladulla Post Office. Ran out of decimal points and had to send someone up to the Westpac for some more." What's your story, we'd love to post up your story. Email admin@australian-threepence.com

Handouts from the Decimal Currency Board

Commemorating the Centenary of Anzac, 100 years of Anzac the spirit lives 2014-2018 this is the first coin seen among a number of Anzac related coins being produced by the Royal Australian Mint. This particular issue is a circulating design so will soon be found in your change with enough minted for every person in the country, 23 million! These will be distributed through banks and retailers and won't be available to purchase from the Mint but can be found in a special PNC issued by Australia Post. There will however be other coin issues in the Anzac Centenary collectable coin program with this coin not technically included in this program.

The reverse features the Anzac Centenary logo which depicts an image of an Aussie soldier with head bowed and rifle reversed in solemn reflection. The Anzac Centenary logo is the symbol that recognises, identifies and commemorates the one hundred years since the First World War, it has been designed to encapsulate the unique qualities that forged the spirit of Anzac and gave birth to our national identity: courage, mateship, sacrifice, generosity, freedom, and a fair go for all. The rim beading seen on the coin is actually a motif reflecting the sun's rays as seen on the Army's Rising Sun badge.

This new coin was unveiled at the launch at Parliament House today attended by students from St Andrews Primary School in Werribee where they were presented with the new coins by the Minister Assisting the Prime Minister for the Centenary of Anzac, Senator the Hon. Michael Ronaldson, and Parliamentary Secretary to the Treasurer, The Hon. Steven Ciobo MP.

It's hoped with such a coin entering circulation the public will be reminded when they receive a coin in change of the service and sacrifice of our defence personnel. Stay tuned for issues from the RAM in the Anzac Centenary collectable coin program commemorating significant dates and events through 1914 to 1918.