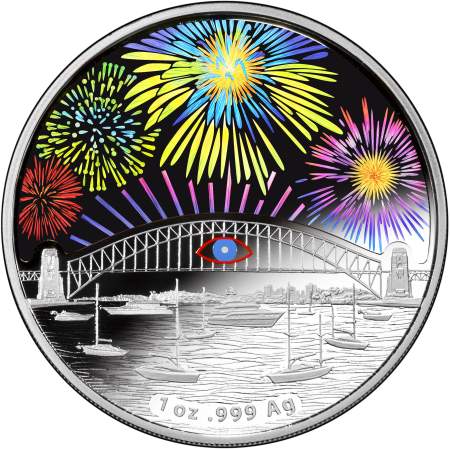 It's that time of year again when we're visiting friends and family, giving and receiving presents, deciding on a hot or cold "Aussie" Christmas lunch, cricket on the beach or in the backyard .... all leading up to the most spectacular event of the year, NYE13 or more commonly known as the 2013-2014 Sydney Harbour New Year's Eve Fireworks Display.

No doubt, at some time or other, you'll have been one of the 1 billion plus people who've watched either the 9pm or midnight Fireworks display on television, and there's probably many of you who've been really fortunate to have been one of the 1.6 million (with that number growing each year) who've actually been in Sydney, crammed around the Sydney Harbour Foreshore, "oo-ing" and "aw-ing" at the pyrotechnical mastery that gets better and better every year.

It's an event that every Australian should have on their wish list, if only to see how such a large scale event is put together. It's estimated that there's about 70 tonnes of fireworks, with 60 tonnes being on the Sydney Harbour Bridge alone. 70 tonnes of fireworks - that's 11,000 shells, 25,000 shooting comets and 100,000 individual pyrotechnic effects; launched from harbour barges, the Sydney Harbour Bridge and 7 buildings, the tallest being the Govenor Phillip Tower at 227 metres. The "Embrace" theme of NYE12 is reputed to have cost more than $6 million!

Well now you can. In an Australian first, and kicking off a 10 year series, The Royal Australian Mint and The City of Sydney have joined forces to release a very special memorabilia item to mark the occasion - a ground-breaking, colourful and special edition $1 holographic 1 oz silver proof collector coin, designed by the Royal Australian Mint artist Aaron Baggio depicting "bursts of light" appearing over the Sydney Harbour Bridge with the obverse portrait of Queen Elizabeth II designed by Ian Rank-Broadley and dated 2014. And as an added bonus, the coin will also portray the special symbol that is revealed on the Sydney Harbour Bridge during the Fireworks display. With the scaffolding and outline of the symbol usually visible during construction, Sydneysiders are invariably trying to guess "what will it be", right up to the last minute.

Each year, the Sydney New Year's Eve Fireworks display symbol changes - and it's always tied into that year's Firework's theme. The very first "Smiley Face" symbol was displayed during the New Year Eve's celebrations of 1997 and it's become a tradition ever since.

Other notable symbols have been:
â€¢ the "Rainbow Serpent" during the New Year Eve's celebrations of the 2000 Centenary of Federation
â€¢ the "Dove of Peace" and the word "PEACE" in the 2002 Celebration in Unity Fireworks display
â€¢ the "Coathanger" of the 2006 "A Diamond Night in Emerald City" celebrations
â€¢ and in the NYE12 fireworks display, the Creative Ambassador Kylie Minogue's Embrace theme, depicting the "Butterfly" and bright red "Lips"

The Creative Ambassador for NYE13 is Sydney resident artist and musician Reg Mombassa, has created "the all-seeing eye", the official logo for the 2013-2014 Sydney Harbour New Year's Eve theme "Shine". A range of artwork has also been commissioned for NYE13, which has been incorporated into the packaging which houses the special edition 40.7 millimetre $1 holographic silver proof collector coin, in it's own leatherette presentation case.

Retailing at $120 with no more than 15,000 coins to be minted, pre-orders began on 2nd December 2013, with dispatching date being after 6th January 2014. The official release date for the NYE13 special edition $1 holographic colour printed silver proof collector coin, complete with the "Shine" symbol, will be 1st January 2014. 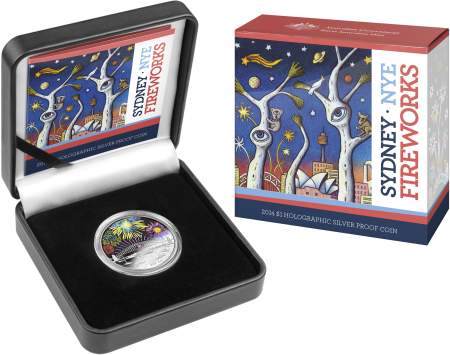 It's that time of year again - summer - the sound of cicada's, the slapping away of mosquitoes, warm sultry nights, the smell of barbeque's, the promise of a holiday over the festive season AND cricket. And not just any cricket match, but the biggest rivalry of them all - The Ashes Series comprising of 5 Test matches between England and Australia, being played in Brisbane, Adelaide, Perth, Melbourne and Sydney.

And to celebrate the 2013-2014 Commonwealth Bank Ashes Series, the Royal Australia Mint is releasing a commemorative 20 cent coin. Australia's honour is on the line - a triumphant win is required to regain The Ashes series from the English, who have successfully won all 3 of the Ashes series played since 2009.

Most people by now know that this great sporting event was established in 1882 after Australia's first Test win on English soil, after a cheeky and satirical obituary was published in The Sporting Times declaring that "English cricket is dead, the body will be cremated and the ashes taken to Australia' (Wendy Lewis, Simon Bladerstone & John Bowan - Events that Shaped Australia, New Holland, page 75, ISBN 978-1-74110-492-9) with the English captain Ivo Bligh vowing to "regain those ashes".

The popularity, reputation and cult status of The Ashes has led to some interesting references and parody's.

In 1908, the rugby league rivalry between Great Britain and Australia was referred to, by the Australians, as the "Ashes".

And in the 1982 Douglas Adam's novel "Life, the Universe and Everything" (the 3rd book in the trilogy "The Hitchhiker's Guide To The Galaxy") a fundamental element of the book's plot was that an urn containing the ashes of a burnt stump, was stolen by alien robots, with the ashes unlocking the Wikkit Gate and releasing an imprisoned world call Krikkit.

The game of cricket has certainly changed from the game played in 1882 - technology in particular is just an integral part of the game as the players. There's Hawk Eye (determining if Leg Before Wicket (LBW) decisions are correct), Hot Spot (has since been dropped but uses infra-red imaging to determine if the ball has struck the batsman, bat or pad), Snickometer (sound analysis tool), Eagle Eye (ball tracking technology), stump microphones, television replays and the Decision Review System (DRS) where each side can contest a decision up to pre-arranged number of times.

To date, 67 series have been played - Australia and England both winning 31 times, with 5 drawn series. So there's a lot at stake - you can be sure that a large number of the Australian and British public will be glued to their radio's and televisions this summer.

This 2013-2014 Commonwealth Bank Ashes Series 20 cent is only available in uncirculated finish and is struck in copper-nickel. It weighs 11.3 grams and is 28.52 millimetres in diameter just like the standard 20 cent but is issued in a blister and printed presentation card for collectors. The depiction of a cricket player in full swing was designed by Royal Australian Mint's Aleksandra Stokic, with the obverse portrait of Queen Elizabeth II designed by Ian Rank-Broadley. At present, the 20c unciruclated coin is being released with unlimited mintage but to be determined by collector demand.

The Mint has previously issued a number of coins celebrating the Ashes including the 2007 The Ashes Dollar, The Ashes PNC and the 2011 Six Stitcher 20 cent design also in a PNC.