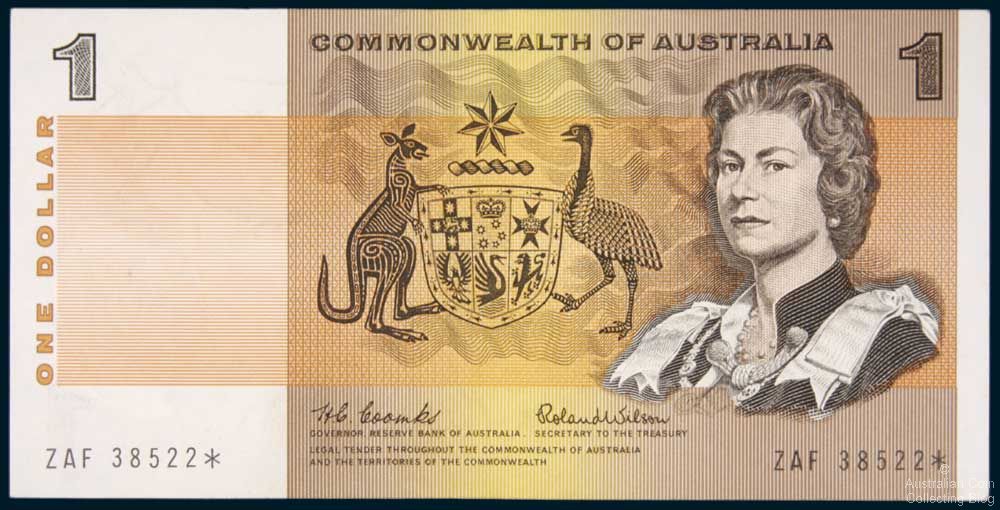 Star replacement banknotes are pre-decimal and paper decimal notes with serial numbers ending with a star or asterisk. Thus being named a star note. These notes were issued from 1948 to 1972 in Australia. They were used to replace faulty, soiled or damaged notes during the printing process. They were introduced to allow sections of 100 notes to start at 01 and finish at 00 to assist tellers with counting notes. There was no longer a need for replacement notes after 1972 with the introduction of automated counting systems. These automated systems allowed a faulty note in a sheet to be marked with a special ink and after it was cut as it was being processed would be recognised and diverted away from the final bundle.

The USA began using the star replacement note system in 1910. Australia was slow to adopt the practice favouring to hand stamp the original serial number of a soiled note onto it’s replacement. The star note system was introduced in Australia in 1948 to replace this laborious practice. Star notes were produced in a special printing run and when a problem note was found it was simply replaced with a star note. These star notes were the ten shilling, pound and five pound notes. There were no ten pound star notes produced. The star on a pre-decimal star note is a hollow five pointed star, the star on a decimal banknote is actually a six pointed asterisk.

On average there was one star note to every 200-300 ordinary notes. $50 notes were introduced in 1973 and were followed in 1984 by the $100 note so there were no star notes issued for these denominations.