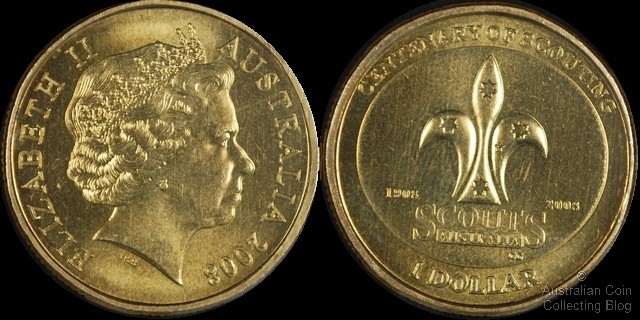 In 2008 the Royal Australian Mint continued with a plethora of releases of the standard 25 millimetre, 9 gram, aluminium bronze one dollar coin. All Issues feature the standard Ian Rank-Broadley effigy of Queen Elizabeth II. There was a release of standard design mob of roos dollars into circulation as well as a commemorative issue (into circulation) for the Centenary of the Scouting movement. These Scout coins were also available in commemorative RAM wrappered Rolls, the first of such an issue.

2008 brought the introduction of counterstamps and privymarks in addition to mintmarks to help differentiate between where each coin is minted. In 2008 we celebrated the Centenary of the Australian Coat of Arms with C, S, B and M marks. A lovely tribute to the old reverse on all pre-decimal coins minted prior to 1939.

With the success of the pad-printed Coloured Ocean Series of 2006-7, a Land Series was issued for 2008-9. Also a series of “Inspirational Australian’s Education” starting with an issue of Mary MacKillop.

These values are updated hourly using New York market prices. Coin values are purely the value of the gold or silver they contain and do not account for any numismatic value.
Prices Last Updated: 00:04 02 Feb 2023