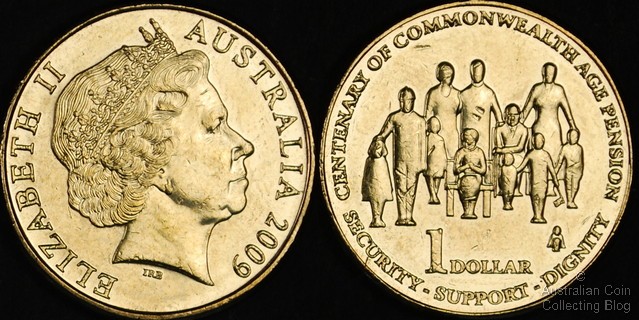 In 2009 the Royal Australian Mint continued with a plethora of releases of the standard 25mm, 9 gram, aluminium bronze one dollar coin. All Issues featured the standard Ian Rank-Broadley effigy of Queen Elizabeth II except one, the gold issue (released as a single coin and not in a set) featured the original Arnold Machin portrait. There was a release of standard design mob of roos dollars into circulation as well as a commemorative issue (into circulation) for the Centenary of the Aged Pension. These Pension dollars were also available in commemorative RAM wrappered Rolls.

2009 continued with the idea of differentiating mintmark issues with mintmarks, counterstamps and privymarks. There was however, no counterstamp dollars issued as the RAM didn’t take their portable press to any venues in 2009.

A well-known coin dealer in Queensland, VP Coins, kept up with their plan to boost show attendance at the Brisbane Coin shows by overprinting the pivymark folders with special lettering to commemorate the show. Apparently examples of these overprints (which started in 2008) are in the RAM collection so we can assume they’ve been recognised by them as official releases.

Following on with the pad printed coloured series of coins another 2 coins were released in the Land Series which were the final coins in this series. An Air series had been planned but was canned due to collector protests over the large number of collector dollars released by the RAM.