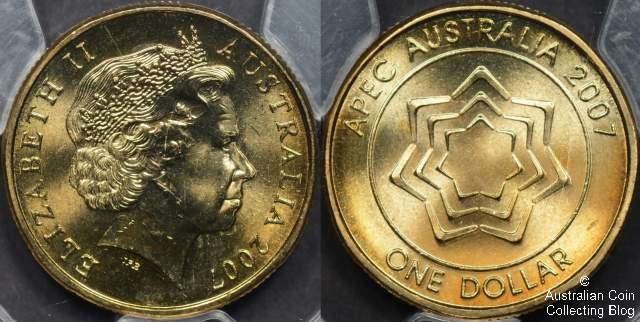 2007 brought us a host of new releases and yet only one coin into circulation, the Apec dollar. If you’re a dollar collector then you’re wallet was looking quite a bit thinner at the end of 2007 with 13 different dollar designs.

Continuing on after the 2 coloured releases of the Ocean Series of 2006 are 4 other fauna designs depicted by sculptor Tony Dean.

If you wanted an uncirculated Mob of Roos dollar dated 2007 then the only way to obtain one was with the Bounding Roo PNC or the Mint Year Set.

The Sydney Harbour Bridge dollar with the varying mintmarks was issued in individual small mintmark folders.

The Ocean Series, Peacekeepers, Year of the Pig, Ashes and International Polar Year coins were all issued in a soft plastic capsule in a cardboard card.

This year the Royal Australian Mint released circulation Apec dollars in rolls in comemmorative paper for collectors. There was also a limited release of uncirculated Apec dollars in capsules in a presentation box. These were originally for those attending the APEC summit but were available after to collectors.