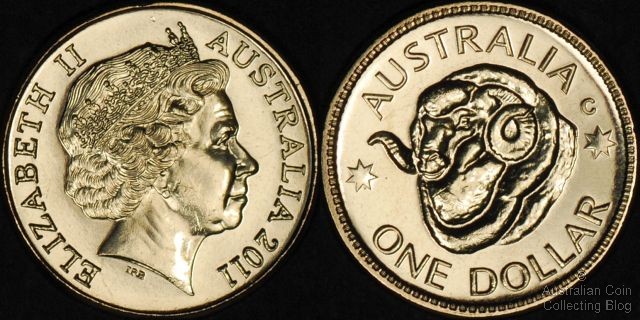 The Mintmark 1 Dollar for 2011, The Shilling Ram

2011 was an interesting year of 9 gram 25mm aluminium bronze one dollar releases by the Royal Australian Mint. The mintmark dollar was the restruck design of the Shilling Ram by George Kruger Gray seen on Australian pre-decimal coinage. It certainly looks like a gold plated marvel in aluminium bronze after being seen only in silver before. We saw more of the portable coin press thanks to new CEO Mr Ross MacDiarmid, this made collectors very happy. 2011 was also the final year of Dorothy Wall in the Blinky Bill Baby Coin set, 2012 started a new series.

Footnotes:
* – Mintages have been updated up to and including the 2013-14 RAM annual report. It’s expected that these are the final mintages for these issues.

**- Mintages included in the general mintage numbers. Not listed separately in the annual report.