If you’re a participant in any PCGS Registry Sets then you would have received an interesting email today from BJ Searls, the PCGS manager of the Set Registry. PCGS are introducing bonus points for the so-called ‘finest graded’ coins. Basically, that means if one of your sets contains the highest graded coin of a type, and there are no coins available of that type in a higher grade then you’ll get bonus registry set points. If your coin is the single finest graded (usually denoted as pop 1/0) coin, then you’ll receive two bonus points. However if your coin is the equal highest graded and one of two at that grade (population 2/0) then you’ll get one bonus point.

In the case where some evil coin grading genius manages to submit a coin to PCGS that grades higher than yours then you’ll lose the bonus registry set points. Similarly, if you previously had a single finest graded coin and someone steals your registry set thunder with an equal graded coin then your two bonus points will be reduced to one. In the final case, if you’re sitting pretty with a coin that is population 2/0 and basking in the glory of the bonus point that gets you, then you’ll be sadly disappointed when Wile E. Coyote (coin grading SUPER genius) gets a coin graded with the exact same grade as yours, making your coin a population 3/0 coin. No more bonus point for you. Let’s look at how this might work for some highly graded Australian coins.

First up, is the single finest graded 1947Y half penny in PCGS MS64RB. Previously this coin would have received 65 registry set points (64 for the grade and 1 for the RB desigination). Under the new system it will get two bonus points resulting in 67 registry set points. 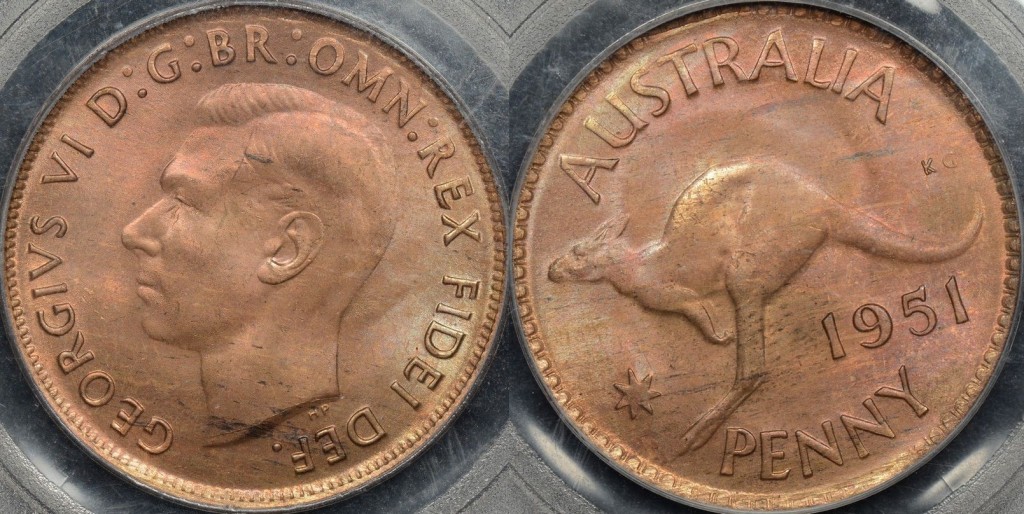 Next is a 1951M penny in PCGS MS65RD of which there are two at this grade and none higher. Previously this coin would have received 67 registry set points (65 for the grade and 2 for the RD desigination). Under the new system it will receive 1 bonus point resulting in 68 registry set points. 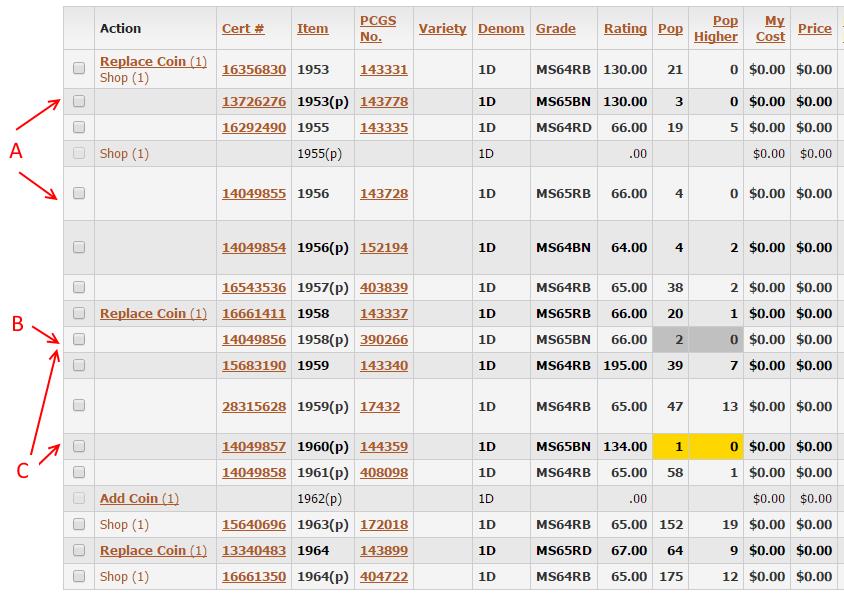 The complete PCGS Registry set rules can be found here and in there is direct mention of the bonus points for pop 1/0 and pop 2/0 coins. As an aside, in the image above you can easily see the coins that are receiving bonus points because they are highly graded. Coins with two bonus points are highlighted in yellow while those with one in grey. Additionally as the owner of the set if you hover your mouse over the coloured cells a popup will be displayed explaining the top pop bonus points that coin is receiving. It looks like you can only see these colour codes (and informational popup) if you’re the owner of the set, they are not visible when browsing other people’s registry sets.

It’s an interesting move by PCGS, with their motivation (in their own words) being to “reward the owners of these very special coins”. It certainly makes single finest graded coins potentially more valuable. It could also add value to brown (or red brown) graded coins that were previous registry set ugly ducklings. For example, previously a top pop (5/0) coin in MS65RB was worth 66 registry set points, while the same coin in MS65BN (which happens to be a pop 1/0 coin) was worth just 65 points. Under this new system the MS65RB coins are still worth 66 registry set points, while the MS65BN is now worth 67! It’s now (potentially) a more valuable coin to a registry set participant.

Given that competition is already strong to get the highest graded Australian PCGS coins for registry sets one can only wonder if these changes will help drive up prices of the top graded coins even further.