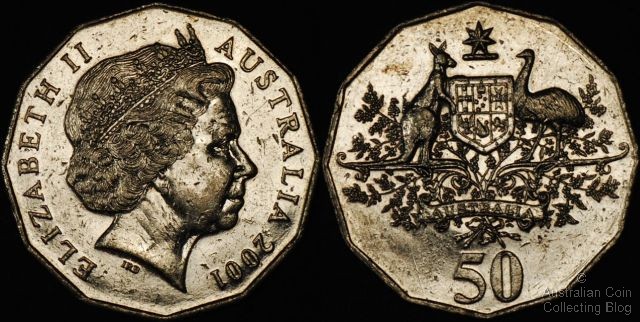 The reverse design features the Australian Coat of Arms. This Coat of Arms consists of a shield depicting the badges of the six Australian States. Aside the shield are a Red Kangaroo and Emu. These animals symbolise a nation moving forward. Above the shield is a seven pointed star on a wreath, each point representing the 6 States and one for the Territories. Below are sprays of Golden Wattle and ‘Australia’ in a scroll.

This 50c is the standard 31.51mm dodecagonal coin with plain edging. It is copper nickel weighing 15.55g. In 2001 there were many coins released into circulation commemorating the Centenary of Federation including a one dollar coin, 50c and 20c issues. This is just one in a series which includes 9 fifty cent coins depicting each state and territory of Australia that were joined together in 1901 at Australia’s Federation.

The obverse of this coin is the standard Ian Rank-Broadley effigy of Queen Elizabeth II.

Mintages of this coin in other sets can be seen below:

The proof version found in the 2001 Australian Proof sets was a coloured coin and there were 59,569 of these sets produced.

90,822 Mint Sets were also produced which included this coin in uncirculated condition.