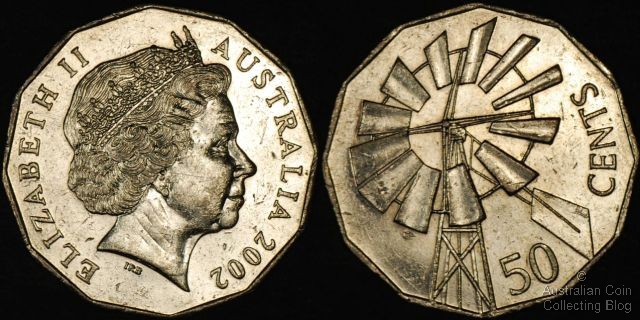 The 2002 Year of the Outback 50 cent coin shown above is a circulation 50c released by the Royal Australian Mint and can be found in your change.

This 50c is the standard 31.51mm dodecagonal coin with plain edging. It is copper nickel weighing 15.55g. In 2002 other coins were issued promoting the Year of the Outback including a one dollar and a $5 silver proof.

The reverse design by Wojciech Pietranik features a windmill. This iconic outback feature that stands guard over our precious water supplies can be likened to the Hills Hoist that can be found in every Australian backyard. The obverse of this coin is the standard Ian Rank-Broadley effigy of Queen Elizabeth II.

11,507,000 of these coins were issued into circulation. 68,752 Mint Sets were produced which included this coin in uncirculated condition. 39,514 proof coins can be found in the proof year sets.