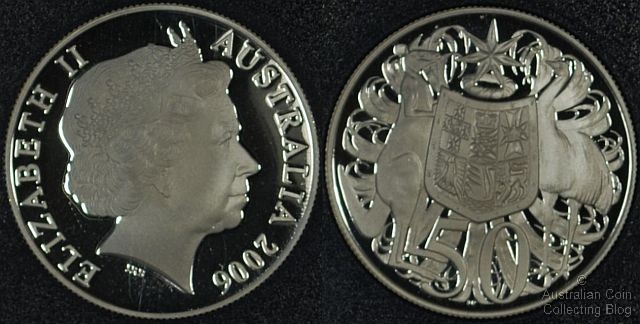 When Australia changed to decimal currency in 1966 the 50c was originally round in shape, was made of 80% silver and depicted a young Queen Elizabeth II her portrait designed by Arnold Machin. It was quickly withdrawn from circulation as the value of the silver content exceeded it’s face value. In 1969 the new 50c piece had changed it’s shape to the 12 sided dodecahedron that we see in our change today.

To mark the 40th anniversary (in 2006) of our transition to decimalisation in Australia the Royal Australian Mint has revisited our original 50c in shape and composition. Included in the Eight Coin Proof Sets issued for 2006 was this 31.51mm round 50 cent made from 80% silver and 20% copper. It weighs slightly less than it’s dodecagonal cousins at 13.28grams. This proof set also included 2006 strikes of the 1c and 2c pieces that were also removed from circulation. 45,373 of these sets were minted.

This 2006 round silver 50c features the original standard Coat of Arms depicted by Stuart Devlin. The obverse features the standard 2006 obverse by Ian Rank-Broadley.

The Proof Fine Silver Set (5,829 minted) for 2006 also included this round design in 99.9% pure silver but the obverse portrayed the Queen in her younger days, the Arnold Machin portrait of her used in 1966.