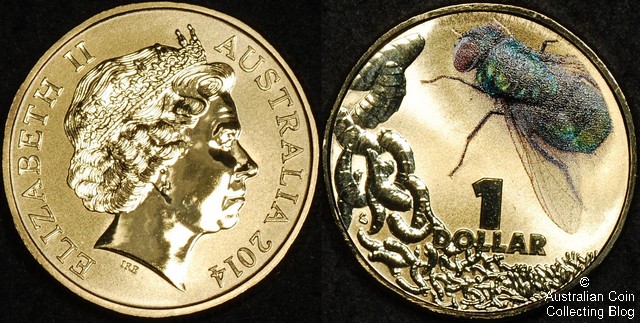 The first two coins in a new series of coloured one dollar coins from the Royal Australian Mint have been released with one sure to have you reaching for the can of Mortein. A series of coins featuring Bright Bugs scrapes the bottom of the rotting carcass to bring you the Blow Fly complete with squirming maggots. The Blow Fly coloured reverse design is by Bronwyn King, the Mint’s newest coin designing talent. Ms King was a student at CIT, the Canberra Institute of Technology and won a design award from the Mint as a student in 2012 and now with her Graphic Design degree in hand is designing collector coins.

The Australian Sheep Blowfly (Lucilia Cuprina) adorns the reverse of this coin with it’s blue, green and black metallic exoskeleton shining in pad printed colour. Maggots in various stages of growth are also a relief design feature on this coin. Around the world there are 1,100 species of Calliphoridae or blow flies and if you haven’t gone all squeamish then you will soon.

Nope, can’t do it, you’ll have to ask Google if you would like to know more about the Blow Fly especially the larvae, it is particularly grotesque. They live in poo and are attracted to strong unpleasant odours. They feed on our live sheep costing the agricultural industry an estimated $175 million each year. Some maggots are even specially bred for medicinal purposes cleansing dead tissue in wounds that just won’t heal. Following the life-cycle they can even be relied on as evidence in forensic investigations.

The Bright Bugs series comprises of six Australian legal tender one dollar coins, this one and the Ulysses Butterfly have been released in February 2014 with four others to follow throughout the year. The next in the series will be the Cuckoo Wasp and the Rainbow Stagbeetle. The Blow Fly $1 is presented in a capsule in a colourful collector card -and just to be a nuisance the card is a different size to other series. Each coin is struck on an aluminium bronze planchet, weighs 9 grams and is 25 millimetres in diameter with interrupted edge milling. The finish is frosted uncirculated. The effigy of Queen Elizabeth II is by Ian Rank-Broadley and is the standard obverse. Mintage will be capped at a maximum of 30,000 coins. This coin is issued for $15. 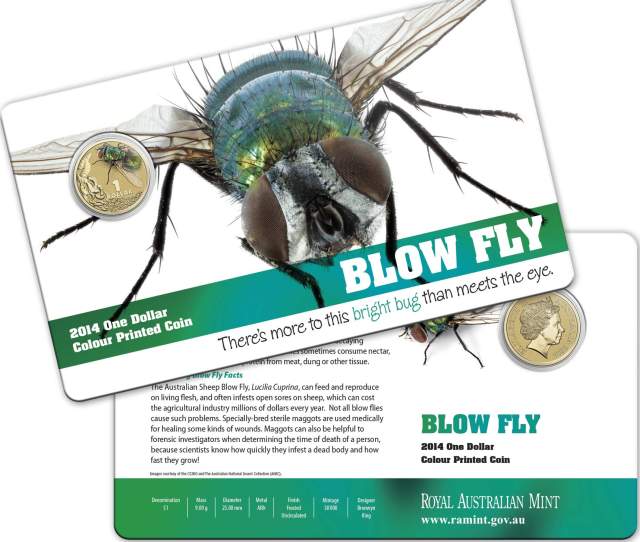