As originally published in Australasian Coin and Banknote Magazine April 2021 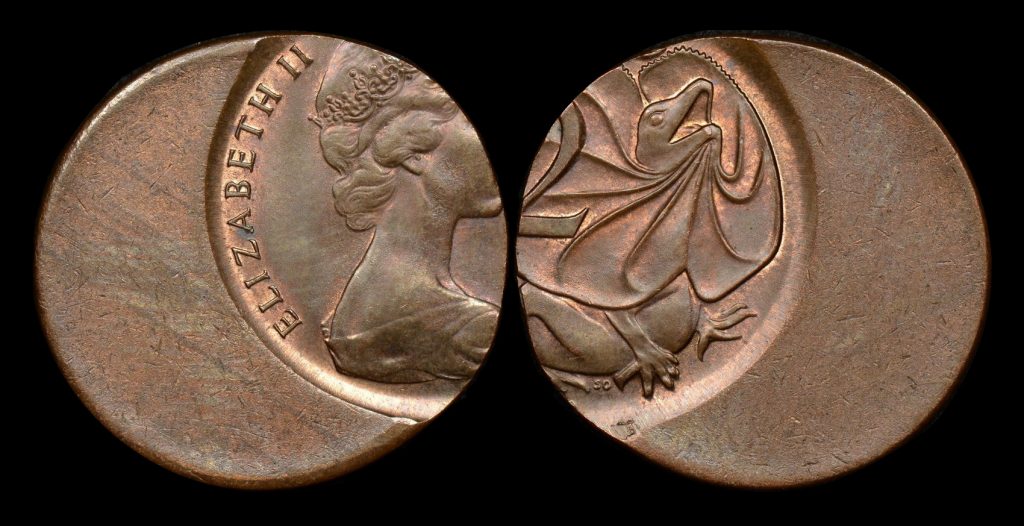 If you’re new to coin collecting or just new to error coins then the ‘off centre’ coin error is among the most instantly recognisable. As well as being distinctive, they are extremely desirable because it’s so obvious what has gone wrong with them! The coin in the image seen here is an Australian 2 cent that has been struck 40% off centre. 40% of the coin remains unstruck while 60% of the design is present. We’re not sure of the date (because the date is missing) but the Arnold Machin portrait of Queen Elizabeth II places it somewhere from 1966 to 1984.

This error two cent coin was produced when the blank planchet entered the coin press while the collar die failed to engage. The collar die is the third die that holds the planchet and if required, applies any edge milling. The coin blank was not located properly (perhaps due to the lack of the collar die engagement) and when struck was several millimeters away from where it should have been. This gave us our off-centre strike. How do we know the collar die was not engaged? Primarily because the coin is flat without any noticeable step in it.

What makes an off-centre strike a more desirable error to own? There’s a number of factors which of course include grade and condition. Another major factor is how far off centre the error is and generally the further off centre the more desirable it becomes. The final factor is the denomination as this usually dictates the scarcity of errors. In the Australian decimal series $1, $2, and 50 cent off-centres are the most sought after. This is followed by 20 cent, 10 cent and the remaining three smaller denominations more commonly found.