As originally published in Australasian Coin and Banknote Magazine March 2021 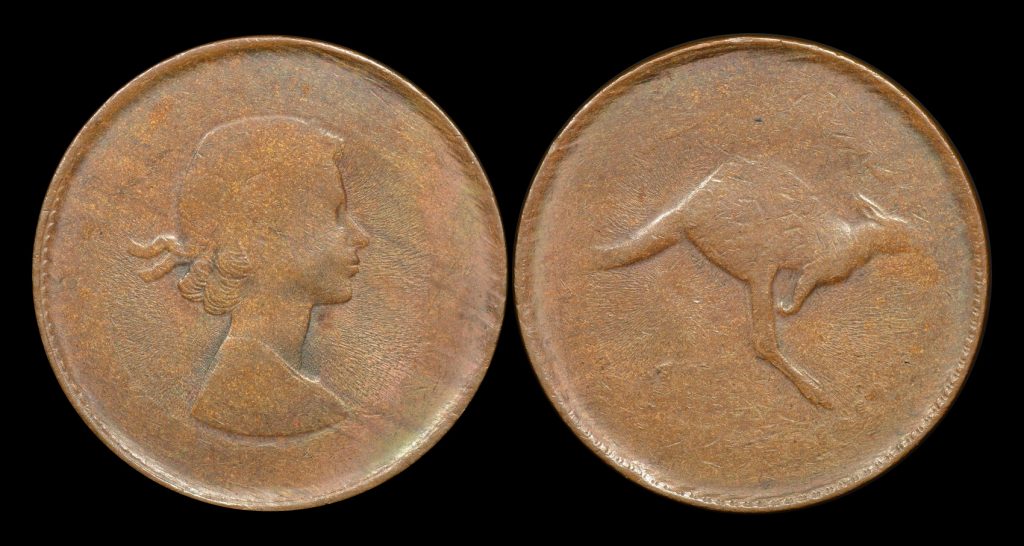 The accompanying image shows an Australian coin, half penny in size and weight, that is missing almost all the design around the edges of the coin. It has almost no trace of the legends apparent. The keen-eyed observer may also note that the portrait of the Queen and the kangaroo are very weak and incomplete. Why is this the case? It’s a simple enough explanation, the coin was struck with a much lower pressure than that required to produce a fully struck up design. The next (and obvious question) is HOW did it get struck with such a low pressure? That’s a more difficult question to answer precisely. Before we address that we’ll look at a couple of other characteristics of this coin that gives us interesting insights into the coin production process.

Firstly, how do we know this error coin that escaped the mint is actually due to a low-pressure strike and not a filled die? The primary indicator is the consistency of the quality and strength of the strike across each side of the coin and when comparing the two sides to each other. Notice how both sides are (relatively) strongly struck in the centres and the quality of strike gradually weakens out toward the edges of the coin. Filled dies tend to show random changes in strike strength depending on where the die is filled while weak strikes show the gradual change in strike strength seen here.

Secondly, WHY does the coin appear more strongly struck in the centres and not struck at all around the edges? That’s because often coin dies are not flat! They are ever so slightly dome shaped with the highest portion in the centre and the lowest at the edges. As a result, extreme weak strikes like this half penny show the strike characteristics you can see so clearly here.

What is the name for this type of error? Typically, you’d see it labelled as a “die adjustment strike”. This suggests that it was produced deliberately during the coin press setup process and the die striking pressure was being adjusted or ‘dialled in’ to create coins that are properly struck up, but not struck so strongly that the life of the coin dies is reduced. Of course, if striking pressure was reduced accidentally (due to a machine failure for example) exactly the same type of error coin would be produced. Whether we call this handsome half penny a “die adjustment strike” or a “weak strike” it’s an impressive coin error well worth seeking out!