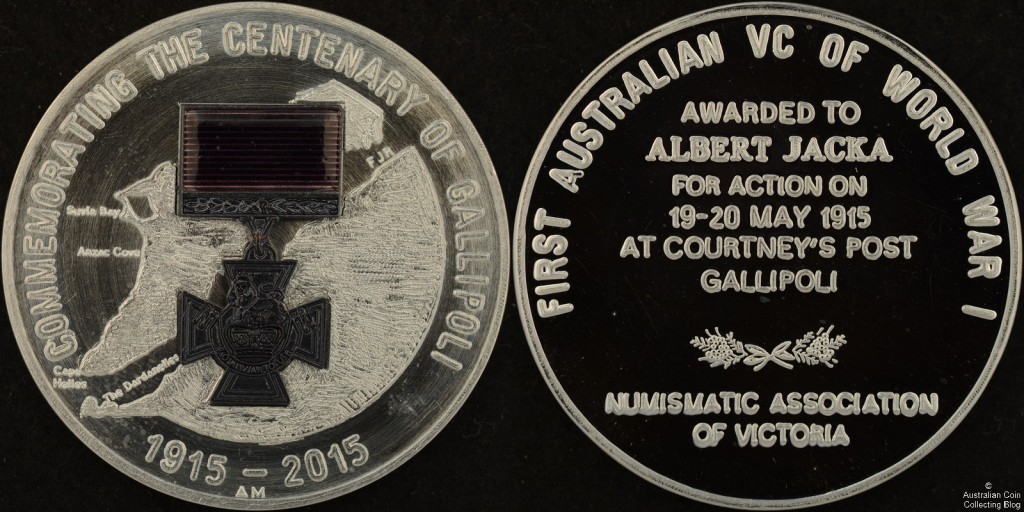 Above you can see a silver medallion issued by the Numismatic Association of Victoria to commemorate the Centenary of Gallipoli. Just 20 of these 50.3mm diameter medallions were struck in 999 fine silver and each weighs 66.5 grams. This medallion includes the representation of a Victoria Cross manufactured in bronze with an enameled ribbon. According to the certificate of authenticity that came with medallion there’s about 2 troy ounces of silver in the medallion. The medallion was also available in antiqued bronze finish with the same representation of the VC attached. 80 of the bronze items have been minted.

The medallion was struck by the Adelaide Mint (you can see their mint mark just below the dates on the obverse) and the design was based on a concept by Frank J. Robinson, a member of the NAV. You can see Frank’s initials just below the Y of CENTENARY on the obverse. The dies were engraved by Michael Nanson from Adelaide, South Australia.

The medallions were struck from three dies, the obverse, reverse, and one to strike the miniature VC which had vitreous enamel in purple applied to the ribbon later. The obverse is dominated by the VC itself and in the background is a representation of the Gallipoli Peninsula and the narrow Dardanelles Strait that separates it from the Turkish mainland. Surrounding the map is the legend “COMMEMORATING THE CENTENARY OF GALLIPOLI 1915-2015”. The reverse of the medallion is similar to most other medallions the NAV has issued in that it contains only words. In this case the legend reads “FIRST AUSTRALIAN VC OF WORLD WAR 1”. Below this is “AWARDED TO ALBERT JACKA FOR ACTION ON 19-20 MAY 1915 AT COURTNEY’S POST GALLIPOLI”.

At the time of writing (September 2015) the silver version of this medallion has sold out, the issue price was $220. The bronze medallion is still available at issue price of $65 from the NAV website. It would make a handsome addition to any collection!