The 2015 Sydney ANDA/APTA Coin, Banknote and Stamp Show was held in Sydney in the last couple of days (Friday October 9 and Saturday October 10).  It was located in Lower Town Hall in the middle of Sydney’s CBD, just across from the picturesque Queen Victoria Building.  For the first time in a year or two the stars aligned for the blog authors with the show occurring in school holidays which allowed us to actually attend!  We headed to Sydney on the day prior to the show (to allow us to do the rounds of the coin shops in Sydney) before attending the Show on the Friday.  We didn’t go in on Saturday but we did make an appearance out the front of the Town Hall to catch up with a coin friend or two. 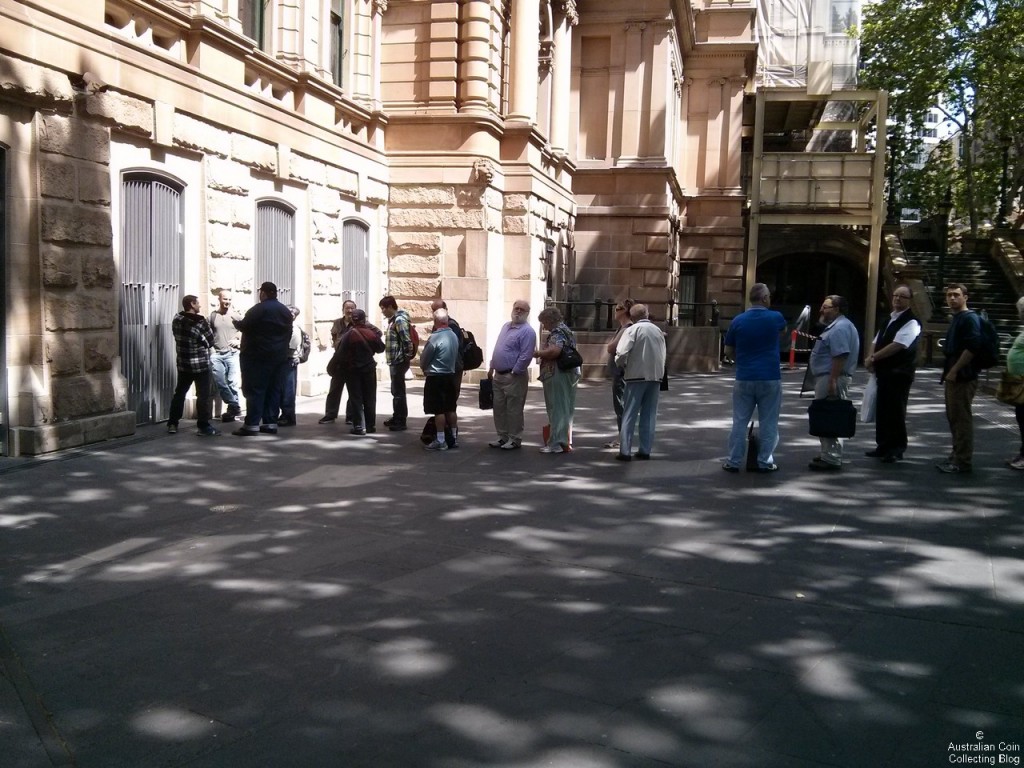 Waiting to Get In -Friday

We arrived at Lower Town Hall just before 12:00PM on Friday as the show opened at midday.  There was a decent sized line of 50 people or so waiting to get in, keen to be the first to snaffle any bargains and to get their hands on one of the 150 2015 Netball World Cup limited edition gold foil overprint PNC’s that was available.  The Royal Australian Mints portable press wasn’t in attendance (actually the RAM was not there at all) so collectors had to content themselves with a 2015 Mob of Roos “S” Privy Mark coin that was available for purchase at the show. 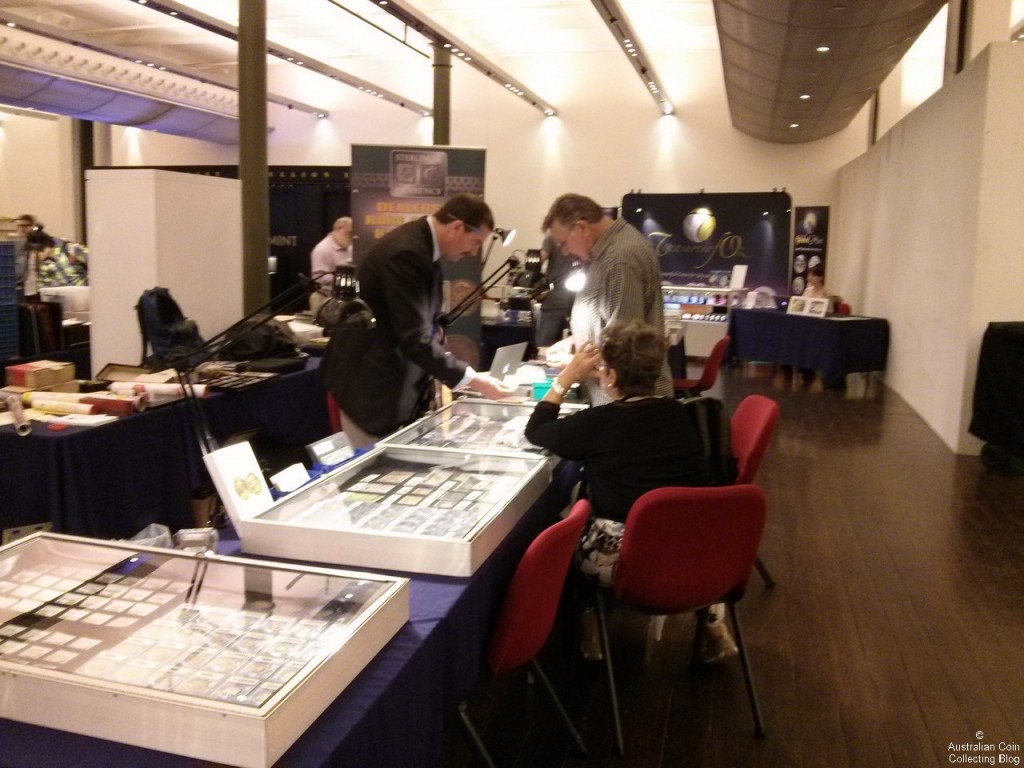 Admission was $10 for a single day ticket ($15 for both days) and once in we saw the usual array of tables, display cases, stock books and coin and stamp dealers waiting for customers to arrive. Coin dealers in attendance include the usual suspects, Sterling & Currency, Drake Sterling Numismatics, Universal Coin Co, Salamanca Rare Coins, Pacific Rim Coins, Coinsearch, Roxbury Auctions, Downies, IAG Auctions, Waterman’s Coins and Notes, Prospect Stamps and Coins, and Klaus Ford Numismatics (who made the trip up from Melbourne).  Coinworks was there too with what looked like four coins on display, admittedly one of those was a proof 1930 penny so they were there looking for high rolling numismatists!

There were also a couple of stamp dealers present and three dedicated bullion dealers selling to gold and silver stackers.  The Sydney chapter of the IBNS was there too, sharing a stand with the ANS and they had some interesting displays as well as a member selling some nice looking tinnies (tin badges). 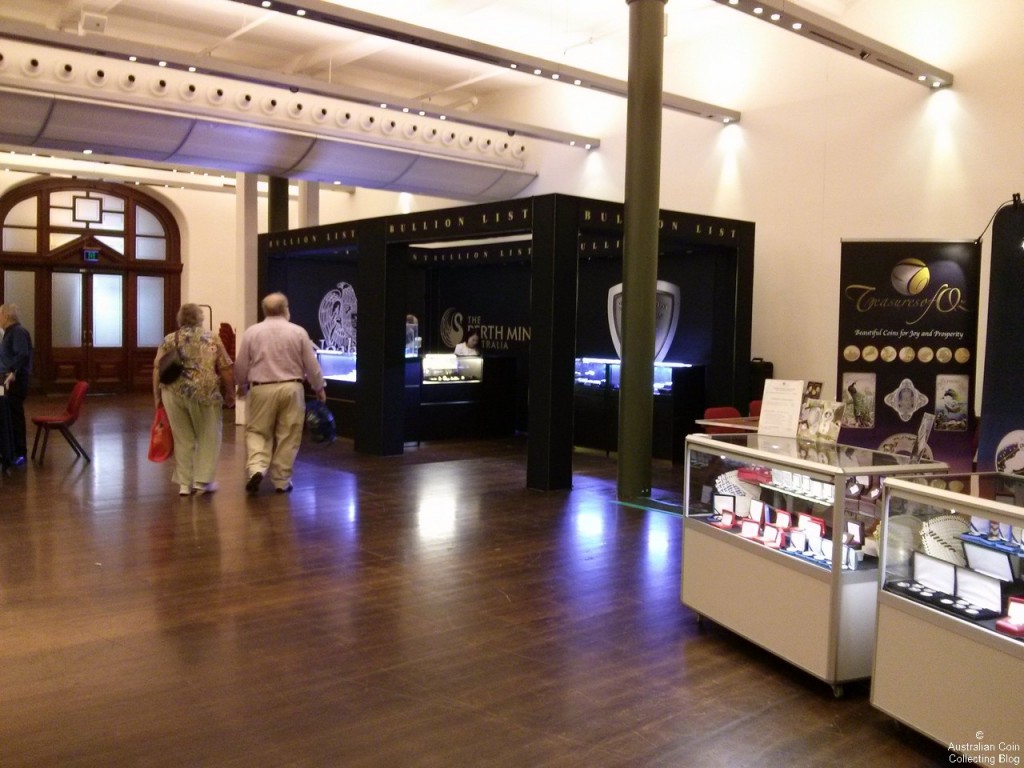 We spent about 4 hours trolling the stock at the show and it’s clear that the market right now is undergoing something of a transition with a lot of new collectors more interested in decimal coins than pre-decimal.  Decimal errors are HOT, there were many more on display that we’d seen previously and the prices were high.  Relatively common broadstruck 5 cent coins from the 2000’s were priced north of $200 while more unusual errors were almost always priced with four figures.  It was also obvious that dealers had been listening to collectors who wanted to get their hands on the coloured $2 coins the RAM has been releasing for the last few years.  Most dealers had some in stock and we saw interested collectors buying them for $10 or more per coin. 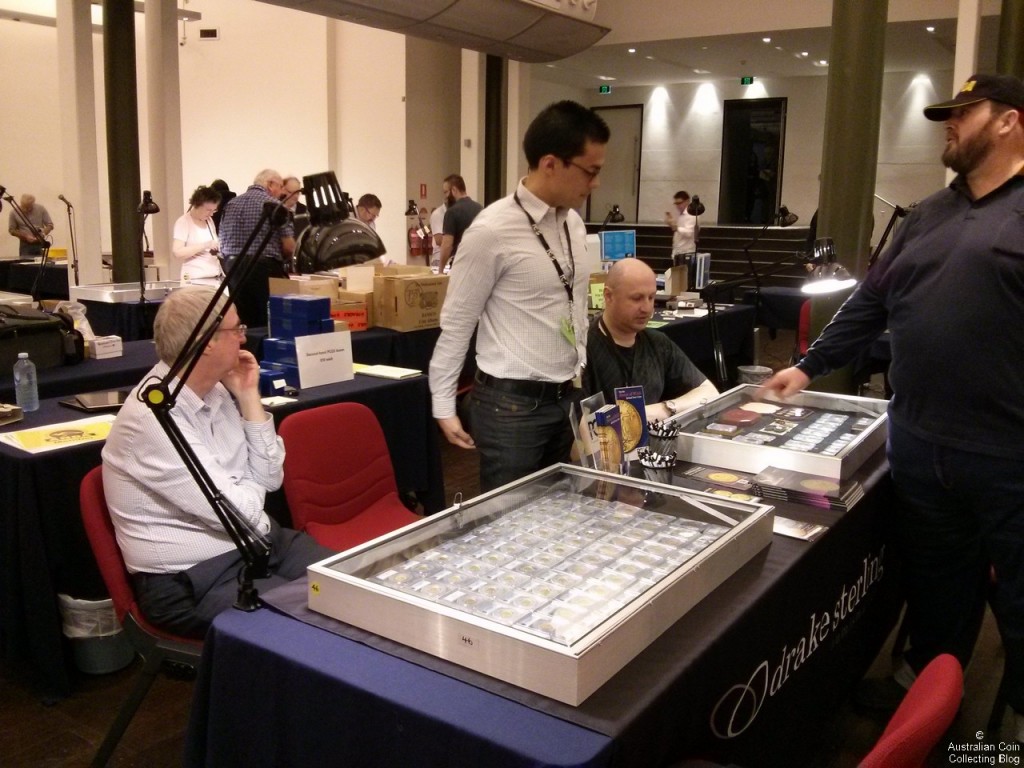 Most dealers had third party graded coins of some type in their display cases which makes a pleasant change from a few years back where this was the exception rather than the norm.  The coins present in PCGS / NGC slabs ranged from decent value to expensive for the coin or grade.  We purchased a few graded coins that were good value and saw other dealers close out sales of PCGS graded coins so clearly there are buyers out there.  We’re always on the look out for raw coins that will grade well at PCGS and at this show we had more luck finding world coins than Aussie pre-decimals.  It was interesting to note that Pacific Rim Coins, who are one of the biggest sellers of PCGS graded coins in Australia, attended the show with a large range of raw world and Australian coins.  The raw coins ranged from nice grade common date material to mid grade circulated better date coins. Perhaps the owner of Pacific Rim Coins is sensing an opportunity to sell raw coins that while still attractive and collectable, are not worth the expense of being graded by a third party grader like PCGS Or NGC with the US dollar weaker right now.

It was hard to judge the level of commercial activity at the show.  The large room that hosted the show was crowded for the first two hours we were there and typically the punters were around those dealers who had a lot of less expensive material available.  That might be in the form of boxes full of loose coins, holdered coins, or albums containing a masses of world and Australian coins.  The ANDA table was surrounded by a crowd for the first hour or so as collectors snapped up the overprint PNC we mentioned earlier and the “S” Privy dollar coin.  Once the initial rush was over things were very quiet and we found time to look more carefully at dealers stock books.  We thought there would be a surge of people at around 5PM as office workers finished their day but that never eventuated.  It was quiet enough that one dealer had even packed up his table by 5PM even though the show didn’t close until 7PM. A couple of dealers reported that sales had been reasonable and that it had been worthwhile attending the show. Remembering this was just the activity on the Friday, we’d expect more collectors would attend Saturday as their jobs permit. 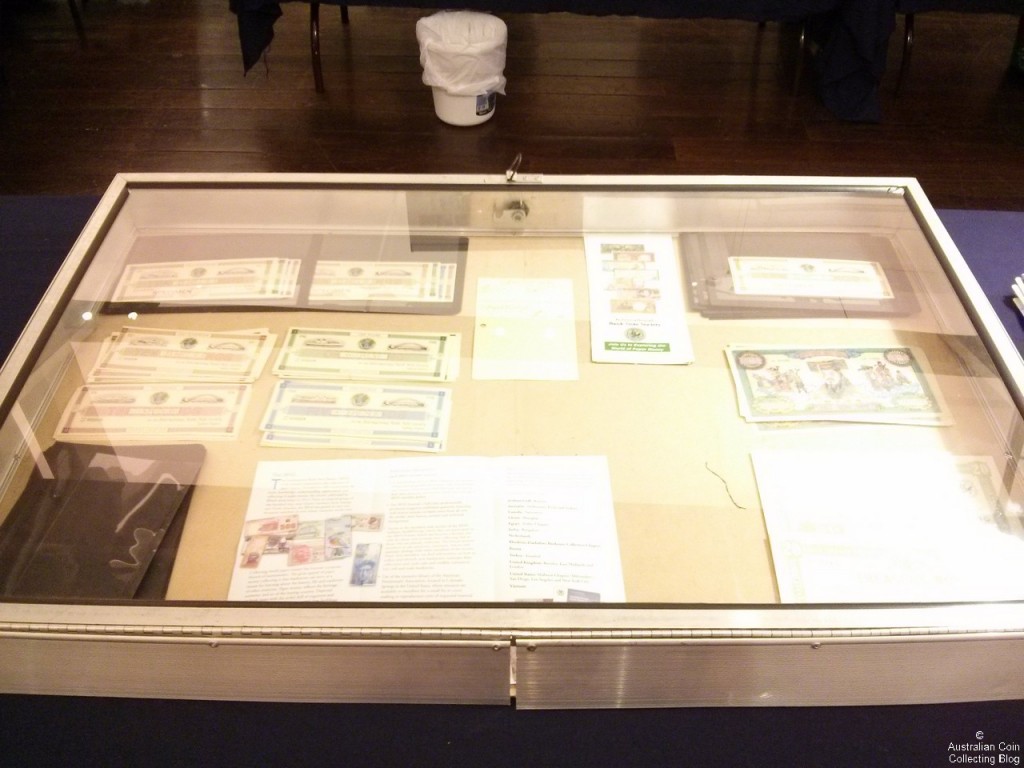 We finished up just before 7PM and headed out to dinner with Eric of Drake Sterling Numismatics and a couple of other coin friends. As usual a fun time was had at the show and afterwards, we look forward to attending another show soon!