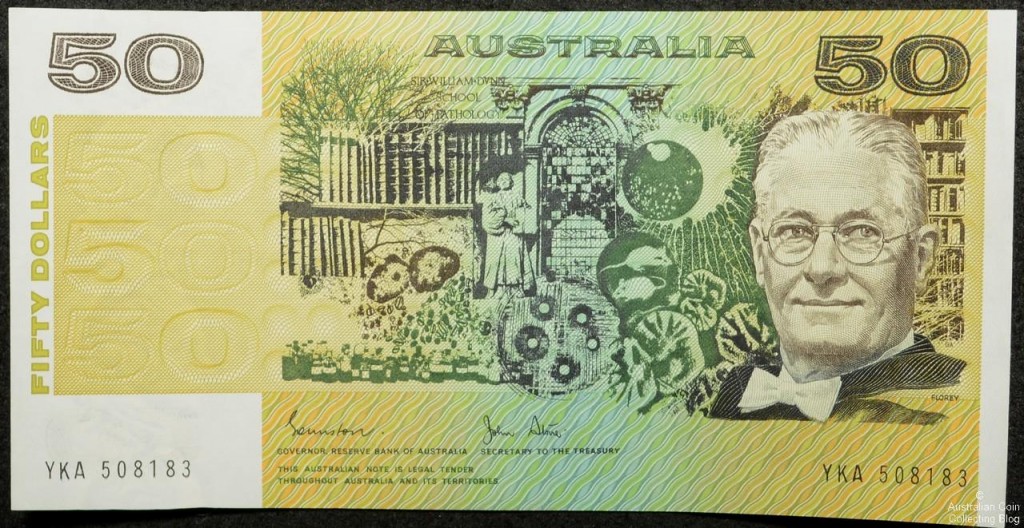 The answer to all these questions will arrive you at the value of your note. Working with these answers you can easily look up past sales to determine the value of the paper money that you’ve found.

The Australian paper $50 banknote wasn’t issued at the changeover to decimal currency in 1966. It was introduced in October 1973 and issued until it was replaced with the new polymer design in October 1995 and paper notes were phased out. The paper $50 note was designed by Gordon Andrews. Maybe you’re not aware but the Mint in Canberra (the Royal Australian Mint) only produces coins, it’s Note printing Australia that makes our Aussie banknotes.

The Australian paper $50 note features Lord Howard Florey, best known for the discovery of penicillin, on the front along with two signatures of the Governor of the Reserve Bank of Australia and the Secretary to the Treasurer, and two banknote serial numbers. The back depicts a portrait of Veterinary Scientist Sir Ian Clunies Ross. Both the front and back have the denomination or face value of 50 printed twice. Not like the lower denominations of paper notes the $50 only ever read “AUSTRALIA” (and not “COMMONWEALTH OF AUSTRALIA” in the earlier years). It was at the introduction of the $50 that this change occurred to all the notes.

Security features hide within the note with the profile watermark of Captain James Cook manufactured into the paper as well as a vertical security thread. Interestingly these paper banknotes were made from a special recipe of fine cotton and linen, the paper manufactured by Portals Ltd. of London. Colours on the note are black, brown, gold and green tones. 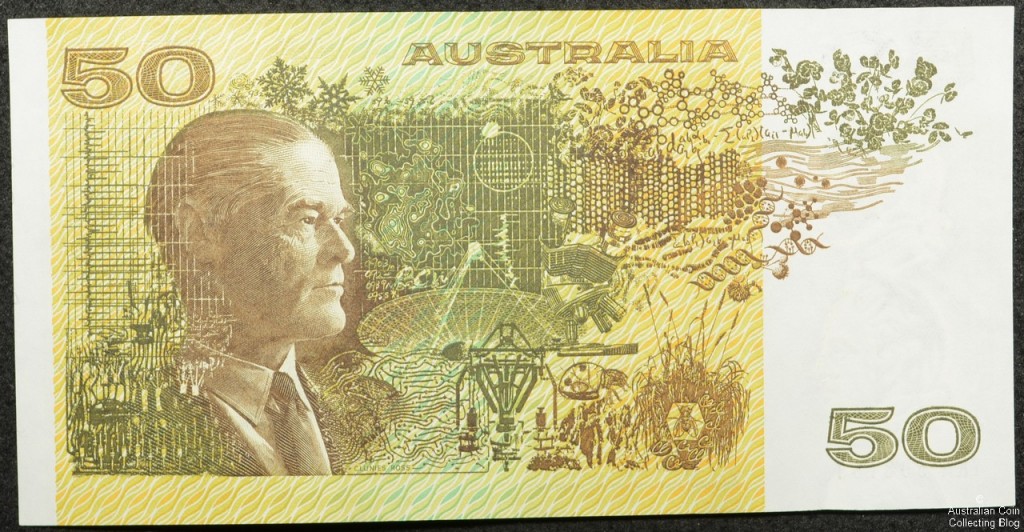 The signatures are of the Governor of the Reserve Bank of Australia and the Secretary to the Treasurer at the time when the notes were issued and it’s from this we can determine the age of the note. From 9th October 1973 to October 1995 there were 9 signature combinations.

3. What is the serial number of the note?

The serial number is the combination of 3 letter prefix and 6 digit suffix on the banknote. There are two serial numbers on front of each note. The letter prefix determines whether it is a first issue, last issue or general issue note-the first and last prefixes usually more collectable and have a higher value than general circulation paper notes. If a star or asterisk exists in place of the last digit then you have a very rare and valuable star note. Read about the value of a star replacement paper note.

4. What condition is the banknote in?

Condition is the deciding factor of the value of the paper $50 note. Notes can be graded from poor to uncirculated as a general rule and then we must consider if the note is missing paper, has rips or pinholes and folds of the paper which is all considered as wear. Even a light teller flick on the corner of the note can deem it almost Uncirculated. Then the value of the note can be determined by the condition of the note. Consideration must be made if the note has been repaired, manipulated or cleaned to appear a higher grade than it actually is.

This note looks different, what could it be?

It might just be an error note! A mistake in the manufacturing process may mean a note that’s spoiled in some way (see starnotes above). Examples of an error paper $50 could be a fault in the paper cutting resulting in an extra flap, missing ink (intaglio), smudged ink, or wet ink transfer. There are many types of errors on banknotes that escaped Note Printing Australia. Error paper notes can be very valuable but this depends on the type of error you have.

In conclusion we could quote catalogue values but they wouldn’t necessarily give you a true idea of the value of your paper note. It’s best to see what your type of note is selling for at a dealer, auction house or selling site such as eBay to get an idea of what your banknote is worth.