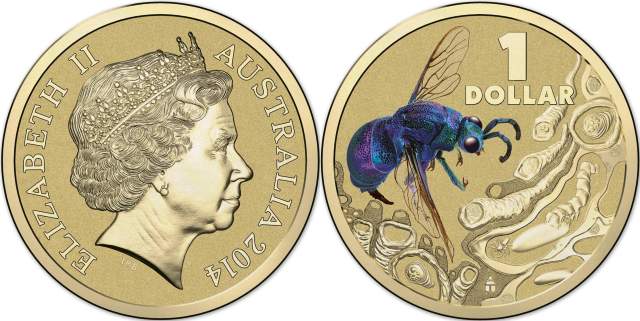 We all know about the Cuckoo Bird, don’t we? They don’t build their own nests, they lay their eggs in other bird’s nests, and once hatched, the baby Cuckoo Bird pushes the “host” eggs out of the nest and takes over the nest for itself.

What if I told you that there’s an insect that behaves just like the Cuckoo Bird? And would you be surprised to learn that it’s name is the Cuckoo Wasp?

The Cuckoo Wasp belongs to the Chrysididae family and there are 76 different species within Australia. They are also commonly called the Emerald Wasp due to their iridescent green, blue or purple colouring. Their habitat is in the urban areas, forests and woodlands of Australia, most commonly found in Queensland and they feed on nectar. The Cuckoo Wasp is one of the six coins in the recently released Royal Australian Mints “Bright Bugs” series of one dollar coins.

This wasp lays it’s eggs in the nests of other insects, most notably those wasps that build mud-nests in and around human habitation. For that reason, you’ve probably seen this brightly coloured wasp in and around your own home.

As the “host” nest is invariably another wasp’s nest, the female Cuckoo Wasp needs to defend itself if it’s discovered when invading another wasp’s nest. To avoid being stung, the Cuckoo Wasp rolls itself up into a tight ball so that it’s external “armour” plates protect it from the other wasp’s stings and biting mandibles. And as it’s thought that the female Cuckoo Wasp doesn’t sting, rolling into a ball is an effective defence mechanism. The long appendage that protrudes from a female’s abdomen is in fact an ovipositor, used to insert and place it’s eggs into the “host” nest.

The Cuckoo Wasp coloured $1 is pad printed with a frosted uncirculated finish and is one of the six coins minted by the Royal Australian Mint in the “Bright Bugs” series – a collection of 6 coins portraying “the prettiest bugs from around the country” with the catchy phrase “there’s more to this bug than meets the eye”.

The reverse of the coin depicts the Cuckoo Wasp’s “life cycle” designed by Aaron Baggio – from a cross section of a “host” mud nest with a larvae attacking the “host” egg, through to the brilliantly iridescent adult Cuckoo Wasp itself. The obverse depicts the portrait of Queen Elizabeth II designed by Ian Rank-Broadley. This 25 millimetre aluminium bronze 9 gram 1 dollar coin is issued at $15.00 with a maximum mintage of 30,000 coins released. 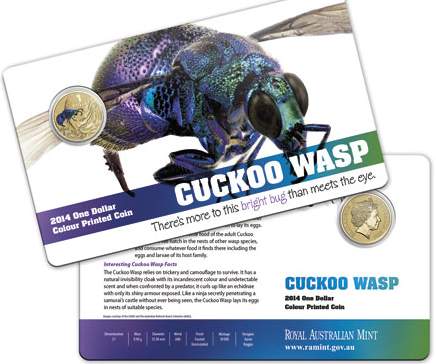 These values are updated hourly using New York market prices. Coin values are purely the value of the gold or silver they contain and do not account for any numismatic value.
Prices Last Updated: 22:04 05 Dec 2022