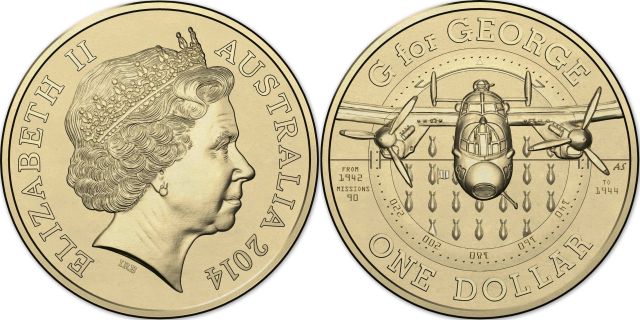 G for George is an historic Australian war plane that can be found on display at the War Memorial in Canberra. It is a four engined Avro Lancaster bomber that flew for the Australian 460 Squadron over German occupied Europe during World War 2 from 1942 to 1944. During this time it flew 90 missions, the second most of a surviving Lancaster bomber before it retired in 1944. It is somewhat remarkable that during the 90 missions every crew member returned alive. After retirement it was overhauled and flown back to Australia by an all Australian crew. When back in the country it embarked on a war bond tour of the eastern states of Australia before being retired from service in 1945 when it was donated to the Australian War Memorial.

The retirement of G for George happened after it flew a last active mission which was to bomb Cologne in Germany on 20 April 1944. It’s now 70 years since this event and to mark it the Royal Australian Mint has released a 25mm, 9.0 gram aluminium bronze uncirculated dollar. The coin is not to be released into circulation and is available to collectors in an information card with the coin housed in a capsule. The information card displays the registration number of the aircraft (W4783) and 90 bomb symbols representing the 90 combat missions the aircraft undertook. These same symbols are painted on the side of the aircraft itself and can still be seen on G for George in ANZAC Hall at the AWM in Canberra.

The coin itself bears the usual Ian Rank-Broadley portrait of Queen Elizabeth II on the obverse. The reverse of the coin was designed by Aleksandra Stokic. It bears the legend “G for George” and “One Dollar” and some small notations indicating when the bomber was active and how many missions it undertook. There is an excellent front-on representation of a Lancaster bomber that dominates the centre of the coin against a background showing stylised bomb silhouettes. The aircraft and bombs are enclosed by a circular frame that represents the dial of a compass.

Mintage of the coin is intended to be 30,000 coins and the price is $13.50. At the time of writing the coin was still available for purchase from the Royal Australian Mint website. This interesting military themed coin is part of the RAM’s ANZAC Centenary Coin Program and is likely to be a popular one to collect as military themed coins usually are. Depicting an aircraft of such historic significance is likely to make the coin of some appeal to aircraft aficionados, students of military history, and of course coin collectors.