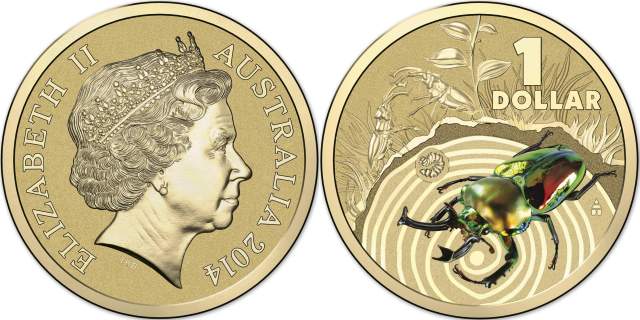 Did you know that there are more than 800,000 species of insects world wide? And that one fifth of all those insects are beetles?

Then consider this – in Australia there’s estimated to be around 23,000 species of beetles, broken down into 121 families. With just one family, the Lucanidae family, containing 85 species of just one type of beetle?

Let’s introduce you to this magnificent beetle, the Coloured Stag Beetle – also referred to the Rainbow or Mueller’s Stag Beetle – depicted on the reverse of the recent release 1 dollar coin by the Royal Australian Mint, in the “Bright Bugs” series. The Bright Bugs series consists of 6 coloured Australian one dollar coins including the Blow Fly, Ulysses Butterfly and Cuckoo Wasp released so far. These dollars are struck in aluminium bronze, weigh 9 grams and are 25 millimetres in diameter.

This beetle is called a Stag Beetle because of their very large unusual mandibles, which are often just as long as their body. These mandibles resemble stag antlers and just as stags use their antlers to fight over the right to mate, the male beetles use their mandibles to fight over mating sites; as well as for fighting over food, which is typically tree sap and decaying fruits. Despite looking ferocious and frightening, Stag Beetles are not a threat to humans, but will draw blood if they pinch you.

Mating rituals begin when males are attracted to the female beetle’s scent. If many males congregate around the female, fierce fighting ensues, with the victor winning the right to mate. Eggs are laid in rotten wood, which in turn provides food for when the eggs hatch. Beetle young are called larvae (or commonly called grubs) and develop through three to five larval stages, called instars, where they moult during each stage. The final stage of larvae development is a pupal state, from where they emerge as adult beetles. This whole process can take several years.

Coloured Stag Beetles are found in the tropical rain forests of Northern Queensland. They are nocturnal and are attracted to lights – however, despite their brilliant colouration, it’s extremely hard to come across them in the wild. While they are eagerly hunted by collectors, it is now an offence to remove these beetles from any Australian National Park or Crown Land.

You can however keep them as pets or more easily just pickup one of these $1 colour printed frosted uncirculated Stag Beetle coins. It’s one of six coins minted by the Royal Australian Mint in the “Bright Bugs” series – a collection of six 1 dollar coins portraying “the prettiest bugs from around the country” with the catchy phrase “there’s more to this bug than meets the eye”.

The reverse coin design depicts the Coloured Stag Beetle’s “life cycle” designed by Aaron Baggio – from the males fighting over mating rituals, through to a cross section of a log contain a larvae, through to the transformation into the spectacular green Coloured Stag Beetle. The obverse depicts the portrait of Queen Elizabeth II designed by Ian Rank-Broadley. The coin is issued for $15.00 with capped maximum mintage of 30,000 coins. For up to date mintage information on this issue and other one dollar coins released in 2014 (the 30th birthday of the Australian Dollar Coin) see the 2014 Australian Dollar Coin Issues and Mintages table. 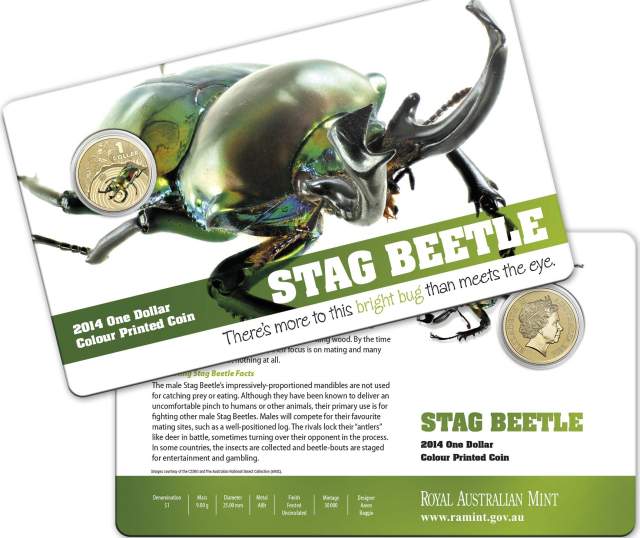