2014 Silver Mob of Roos One Dollar 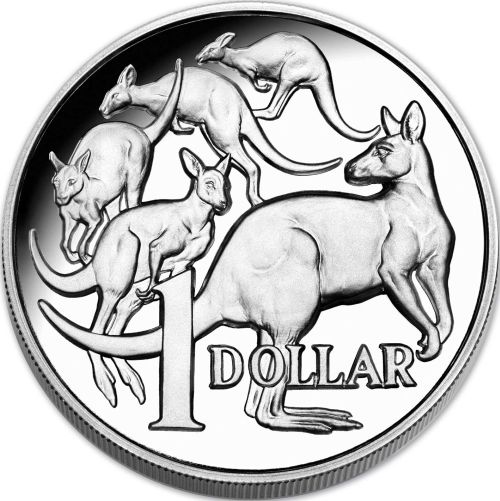 The Royal Australian Mint has just released the iconic mob of roos one dollar coin in one ounce silver form. The coin is released to help celebrate the 30th anniversary of the appearance of the Australian dollar coin back in 1984.

While this isn’t the first oversized mob of roos dollar we’ve seen in silver (there was one in the 2004 Masterpieces in Silver set) it is the first time we’ve seen it as a full one ounce and with a diameter of 32mm. Those of you who know a little about 1 ounce silver coins probably have pricked ears right now because 1 ounce silver coins are usually crown sized, 38mm or more in diameter. Well, the 32 millimeter diameter gives away that the coin is to be struck in high relief on a thick planchet. As far as we are aware this is the first time the RAM has released a product officially classified as high relief (though the Perth Mint has been doing it for a while now). It will certainly be interesting to see this familiar design struck in high relief.

The coin is to be struck in 99.9% silver with a mintage of 10,000 coins and based on images on the RAM website appears to ship in one of their black coin boxes with an information card. The obverse bears the usual Queen Elizabeth II portrait by Ian Rank-Broadley while the reverse shows the 5 kangaroos as first sculpted by Stuart Devlin for the dollar coin in 1984.

These values are updated hourly using New York market prices. Coin values are purely the value of the gold or silver they contain and do not account for any numismatic value.
Prices Last Updated: 22:04 05 Dec 2022