To view the issues of Australian Coin Review (ACR) published in a given calendar year click on the links in the table below. You will then be shown each issue for the year and be able to view a table of contents for each issue.


Strict Standards: call_user_func_array() expects parameter 1 to be a valid callback, non-static method allow_php_in_posts::shortcode_advanced() should not be called statically in /srv/www/australian-threepence/public_html/wp-includes/class-wp-hook.php on line 286

The Australian Coin Review was first published July 1964 by publisher and editor John Gartner and was sold for what seems today like a ridiculously low cost of 2s (20 cents) per issue. Subscribers could get the entire year of magazines via subscription mailed to them for the princely sum of just 25 shillings ($2.50)! The first edition had 16 pages of content and the first editorial by Mr Gartner talked about the rapid increase in popularity of coin collecting in Australia being the driving force behind the publishing of the new magazine. No doubt this interest due to the impending decimalisation of our coinage, a topic which the first issue touched on, discussing the Machin portrait of QE2 that would be used for the new coins.

Stories about decimal coins appeared in the first three issues, and the first two issues had stories about that evergreen numismatic treasure, the 1930 penny. The 1930 penny appeared on the cover of every ACR published. Clearly the public lapped it all up and the magazine proved popular with the first issue of 10,000 copies apparently selling out within three weeks of publishing. 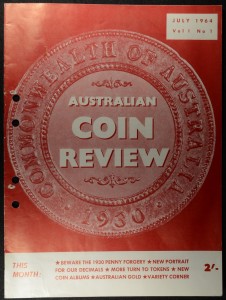 The first issue of ACR was July 1964, and the last December 2001. 11 or 12 issues were published every year and 441 different magazines were printed during it’s almost 40 year history. It appeared that December 2001 issue of ACR was the same as any other to then editor Mick Vort-Ronald, with no hint of events that were about to unfold. The first edition of Australasian Coin and Banknote Magazine for 2002 was printed in February and the front cover sported the sub-heading Incorporating Australian Coin Review. Editor of CAB at the time, Brian Ahearn, said in his editorial with a minimum of fanfare:

By now you will know of our purchase of the Australian Coin Review magazine. This is the first issue with incorporates Coin Review, a magazine that has made a significant contribution over many years to the Australian numismatic community.

In the letters to the editor of the magazine, Mick Vort-Ronald expressed his surprise at the sale of ACR and thanked the readers and contributors to ACR in a letter published in CAB. He said:

The sale of Australian Coin Review to Coin & Banknote Magazine in December 2001 took place after the printing of the final issue….I had no knowledge of the impending sale and thus could not inform Coin Review readers of the change in the last issue of that magazine. I also lost the opportunity to thank the many regular contributors for the quality of their articles submitted, and to thank readers, particularly those in coin clubs, for their loyalty, and in particular, for my time as editor from September 1999 to December 2001.

As it turned out, December 2001 saw the publication of the 441st and last edition of Australian Coin Review magazine. An era in Australian coin magazines was over.

In August 1988 Kesat Pty. Ltd. took ownership of the Australian Coin Review and well known numismatic identity, Joylon Sykes became editor. This situation remained stable until July 1997 when Haannanprint Dubbo began publishing the monthly magazine. It changed hands again August 2000, this time the publisher was Federal Publishing. Editorial control remained in the hands of Jolyon Sykes to August 1999 when Mick Vort-Ronald assumed command. He remained in that position until the last issue in December 2001.

These values are updated hourly using New York market prices. Coin values are purely the value of the gold or silver they contain and do not account for any numismatic value.
Prices Last Updated: 00:04 27 Feb 2021