The 1934-35 Centenary Florin was issued to commemorate the anniversary of the founding of Victoria (1834 – 1934) and the establishment of Melbourne (1835 – 1935). Originally 75,000 of these coins were struck intending to be sold as souvenirs by the Melbourne Centenary Committee for 3 shillings (3/-). The Committee had their one and only outlet in the Melbourne Town Hall on Swanston Street in the Melbourne CBD. It appears that the Committee made the decision some time during celebrations to make the coin available for sale from selected branches of the State Savings Bank (of Victoria). Collis (1971) quotes a letter from the State Savings Bank:

..it does appear from subsequent correspondence that the coin were available from selected country branches of the Bank, including all the larger towns, so your correspondent is probably correct in his recollection of obtaining them from the Bendigo branch.

Toward the end of 1935 the majority of the 75,000 mintage remained unsold and it is conjectured that the public was anticipating being able to obtain the coins for face value once the Centenary celebrations were over. Due to the problems selling the coins at above face value a Victorian department store, Foy and Gibson, purchased 30,000 of the coins from the Committee and handed out the Centenary Florins in Foy Bags as part of customer’s change.

At the conclusion of the celebrations 21,595 of the Centenary florins were returned to the Royal Mint in Melbourne where they were melted resulting in a final mintage of 53,405. There was much criticism of Gray’s reverse design of the nude male figure at the time. Even today, the coin remains unusual for a few reaons. Firstly, you’ll note that that this coin has two dates (1934 and 1935) because it commemorated two events. It’s not often you’ll find a coin with two dates on it! Secondly, the portrait of King George V on the obverse was sculpted by English sculptor Percy Metcalf, the only time his portrait was used on an Aussie coin (although it was used on other coins of the British Commonwealth). Finally, it can be argued that coin itself was never actually meant to be spent as it (initially at least) was sold above face value (3 shillings) as a souvenir of the Centenary celebrations by the Melbourne Centenary Committee. This makes it, in our opinion, the first Australian non-circulating legal tender (NCLT) or collector coin, something truly unusual for the time. Sadly these days collectors are virtually neck deep in NCLT coins as issuing mints try to increase their revenues, but that’s a story for another day!

Being an attractive commemorative coin and handed out as souvenirs the 1934-35 Centenary Florin is relatively easy to find in uncirculated grade. However, weakness of strike on the reverse in particular makes choice examples slightly more difficult to find and true gem coins a hard find indeed. 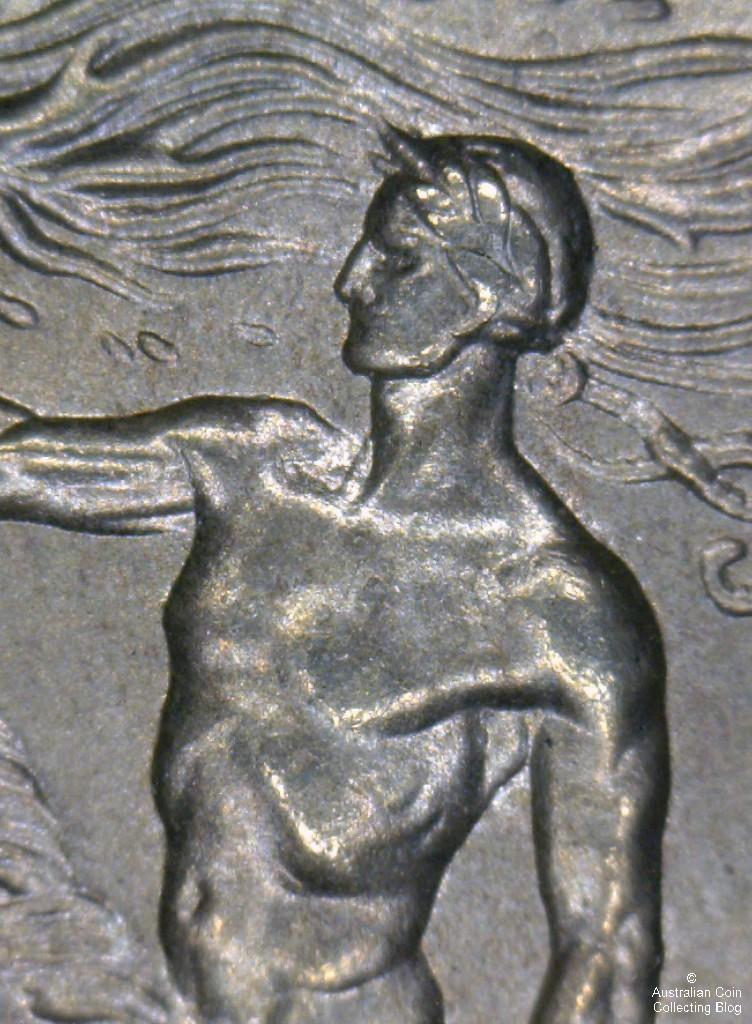 Close-up of Rider and Wreath

If you want to know what your 1934-25 Florin is worth you should take a look at this article on that very subject!