Home › Collecting Coins › What is the 1934-35 Centenary Florin Coin Worth?

A 1934-35 Centenary Florin can be seen above, one of four commemorative Australian florins issued from 1910 to 1963. The coin itself celebrates two events, the centenary of the founding of the State of Victoria (in 1834) and the centenary of the founding of the city of Melbourne in 1835. Initially at least it was distributed by the Melbourne Centenary Committee as a collector coin for 3/-, one full shilling above face value. If you want to read more about the origins of the Centenary florin, how it was distributed, and why the final mintage was 53,405 and not 75,000 then then you’ll want to read this article.

On to what is the 1934-35 Centenary Florin is worth. It’s the most expensive commemorative florin to add to a collection, and in lower grades (VF and under) one of the most expensive florins in the entire florin series, second only to the key-date 1932 florin. Funnily enough, in uncirculated or better grades it is much less expensive comparatively when compared to many other florins, especially those of George V with the standard Coat of Arms reverse.

What is a Circulated Centenary Florin Worth?

Despite the Centenary Florin being a “collector” issue they certainly did circulate and it’s common to see them in Almost Uncirculated or Extremely Fine condition, however, it’s unusual to see them in grades lower than that. Even in Very Fine condition (about the worst grade you’d see one in) a Centenary florin is still worth $250 or so. In EF and AU grades you’d be looking at anywhere between $275 and $400 for a decent example. So, if you do happen to find a circulated florin of this type in a bulk lot (highly unlikely), or in an inherited coin collection (still fairly unlikely) then you’ve got a coin valued in the low hundreds of dollars. Even damaged they can be worth something, we’ve seen a circulated Centenary Florin with a hole drilled in it sell for $100!

Don’t forget that this coin is 92.5% silver and weighs 11.3 grams. This makes the bullion value AUD $11.57 (price updated daily) but you’d have to be pretty desperate to accept silver value for a Centenary Florin. We certainly would not ever advise doing it! 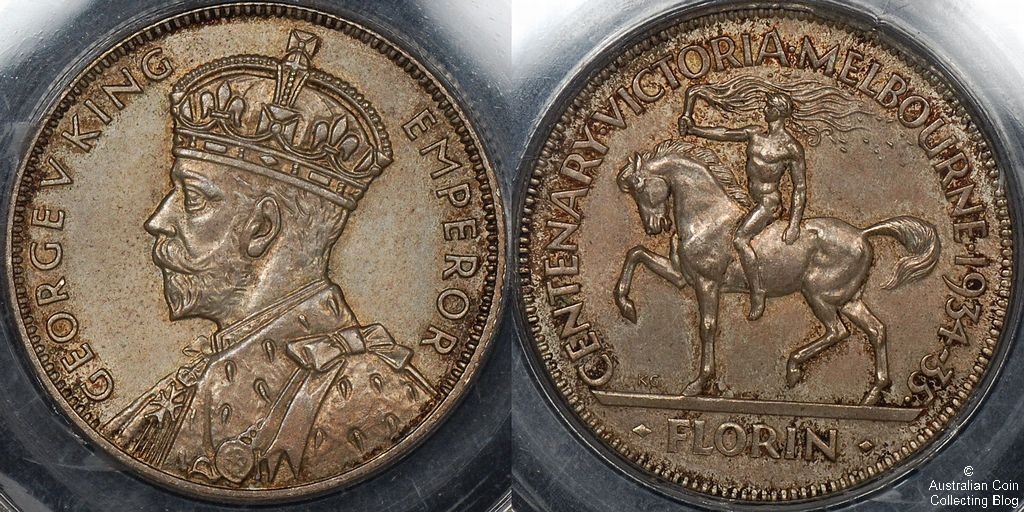 What is an Uncirculated Centenary Florin Worth?

Like the other three commemorative florins the Centenary was hoarded by the public and it’s not hard to find them in uncirculated condition. You’d typically see uncirculated to choice uncirculated Centenary Florins that are not graded by a reputable third party (like PCGS) for sale in dealers books for anything from $500 to $1000. Of course those same dealers won’t offer anything near that amount when buying a nice UNC florin nor will you see the same prices on eBay when selling them. Expect to be able to sell a raw UNC Centenary for $400-$600, perhaps less if eBay is being miserable or your chosen coin dealer is having a bad day.

Values contained in this article were current at time of writing (December 2015) and are provided as estimates only. The exact value of any coin is only known when you actually sell it. We also haven’t touched on the so called “proof-like” and “pattern specimen” Centenary Florins. There’s still some conjecture as if those are actually a thing and not the figment of certain numismatist’s imaginations. Personally we have no particular opinion on the topic one way or the other so we’ve stayed out of the debate.