One of the blog authors was lucky (or unlucky depending if you like early mornings) to be able to catch a 7:00AM flight on Saturday 27 August 2016 departing frigid Adelaide for the equally frigid (and much windier) Melbourne.  The destination?  The Melbourne 2016 ANDA Money Expo! Huzzah!  After a trip in a car, a flight, a bus ride, a walk, a tram ride, and another short walk I arrived at the Melbourne Park Function Center at few minutes after 10AM and was confronted by this: 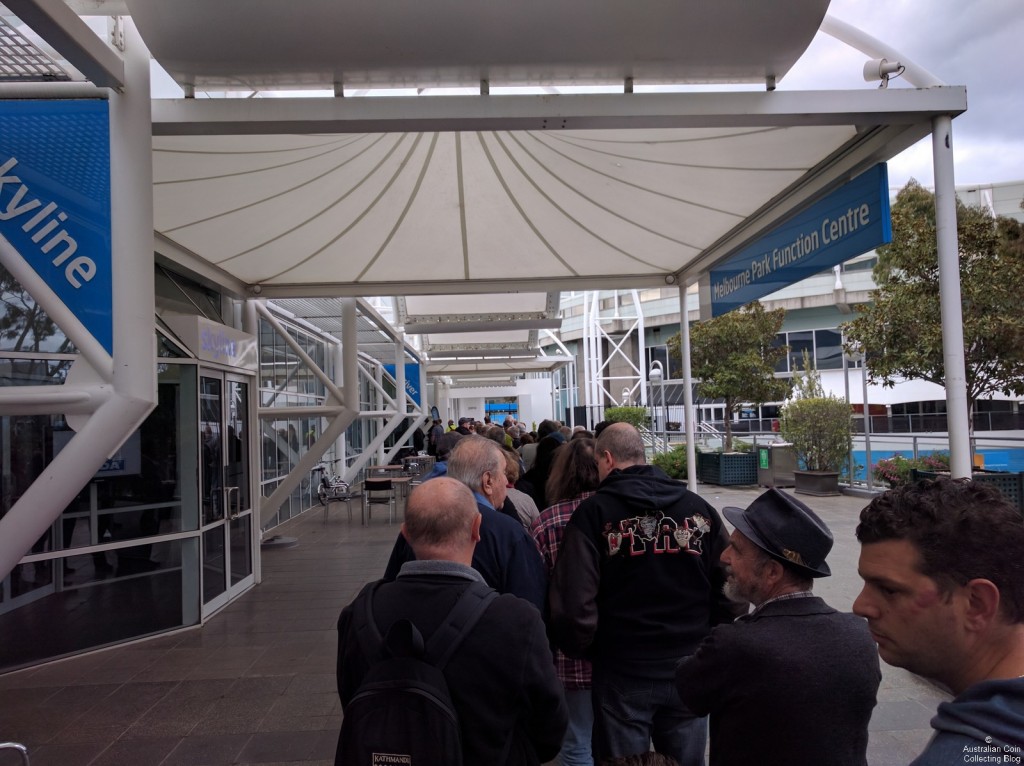 I do so love lines.  After waiting in the aforementioned line for 10 minutes I paid my entry fee, a gold coin donation.  Certainly a welcome change from the $10 entry fee required to enter ANDA shows in years gone by.  Once in I saw…another line, this one comprised show attendees wanting to get their hands on a limited show release PNC which concerned Holden and cars.  Or something.  PNC’s are not my thing so I didn’t take much notice.  No doubt most of those same PNC’s are up on eBay as I write this entry being flipped for a quick and easy profit.  My last mention of lines involves the placement of the booth selling the Holden PNC.  It was right next to the door used to get into the show, which meant I had to step on the feet of people who were spending their time lining up to look at any of the dealer’s tables. Those same tables were blocked by the line for a good couple of hours.  Perhaps a better place for such a booth would be at the back of the room were the line could do it’s thing without getting in everyone’s way. 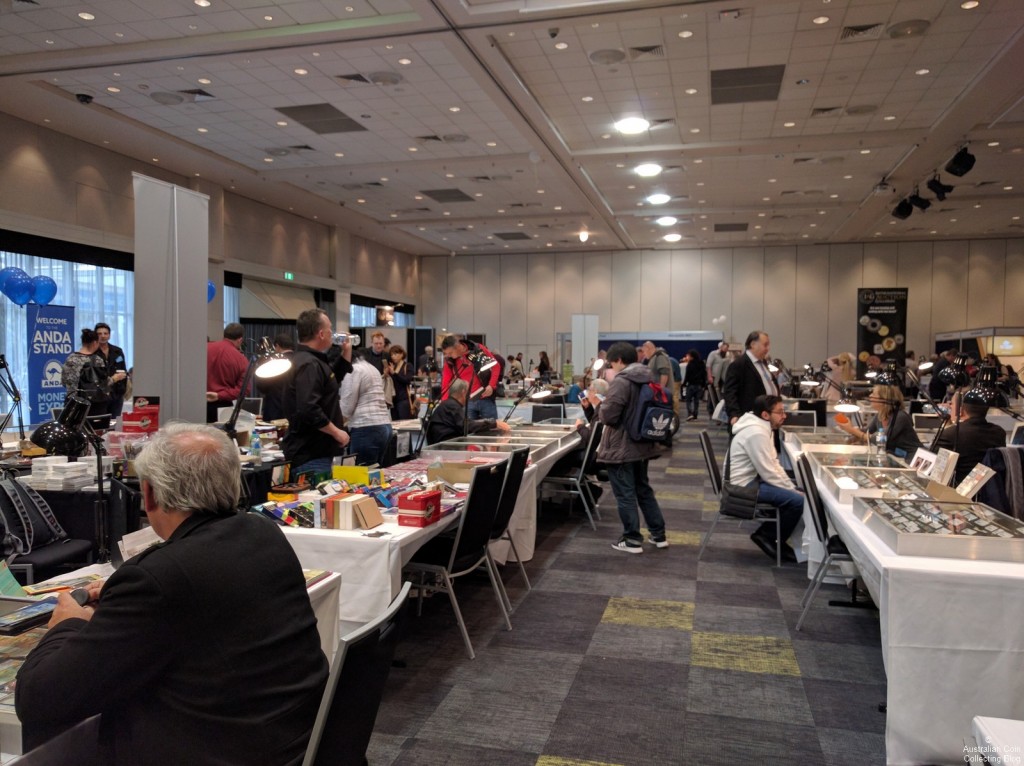 Right, now that the line has been put behind me let’s get onto the Exposition of Money.  The room was packed.  With dealers and attendees.  So packed that it was pointless trying to look at anything in detail before 1:00PM.  The size of the crowd certainly contradicted the mood of experienced collectors in the room who were be-moaning the drop in prices of quality pre-decimal material.  As I walked around I took note of what people were interested in, and I heard multiple requests for coronation $2 coins, ANZAC $2 coins, Olympic $2 coins, this mint set or that mint set, a particular year of 50c to fill a hole in a collection.  To me this is an enormously positive thing as the coin collector base grows from the bottom up and the flood of new collectors into the decimal market will surely lead to more demand in the pre-decimal market as those decimal collectors mature in their tastes and their interests expand into the more historical side of our domestic coinage.

All the usual array of dealers was at the show plus a couple I’ve not seen at ANDA shows before, namely Classy Collectables and Adam from Southern Cross Coins.  Also, there was a really cool setup for kids in one corner of the room where they could look through a huge pile (28.2 kilograms) of 5c coins and attempt to build a full collection.  I believe 3 1972 5c coins were found in the pile and claimed by happy pint-sized collectors.  What a great way of getting kids into collecting!  And they got a magnifying glass.  And it was FREE!  Amazing.  And well done to the show organisers for putting it on, with particular thanks to Andrew Crellin of Sterling and Currency who I believe was the driving force behind the 5 cent table.  There were also some interesting displays of 1930 pennies by Downies Auctions and ANDA President Belinda Downie had a case full of holey dollars and the very first every 10 shilling note.  Mmmmm, expensive!  There was a table for the Melbourne Numismatic Society and a set of displays put on by collectors that show attendees could vote on.

Buying at the show for me was pretty thin.  There wasn’t much in the way of quality raw pre-decimal present nor were there many errors of the type I am interested in.  There was a fair bit of quality world coin available but again, not really in my areas of interest.  However, despite all of this I managed to walk out of the show with a handful of interesting coins so the day was not a complete purchasing failure.

That about rounds it up for the show report so I’ll move along to the part of the show that made the trip really interesting.  Getting to meet and talk with two, living breathing RAM coin designers!  The RAM apparently has four full time designers so the fact that they let two of them loose from the confines of Canberra and unleashed ravenous coin collectors on them must mean they can fend for themselves.  And so they did.  The first designer who I got to bore to death with my silly questions was Stevan Stojanovic.  Stevan has been at the RAM for the last few years and has an extensive history as a coin designer and jeweler.  You can see the back of Stevan’s head in the image below.  Sorry, I forgot to take a picture of the front of his head.  He’s working on a plasticine relief of two kangaroos based on the sketch to the left.  These are going to adorn next years Kangaroo series of coins from the RAM.  I talked to Stevan about the relief of the sculpted designs, how the designs were digitised and how CAD could adjust the relief of the designs to make the coins manufacturable and still show all of the artist’s work. 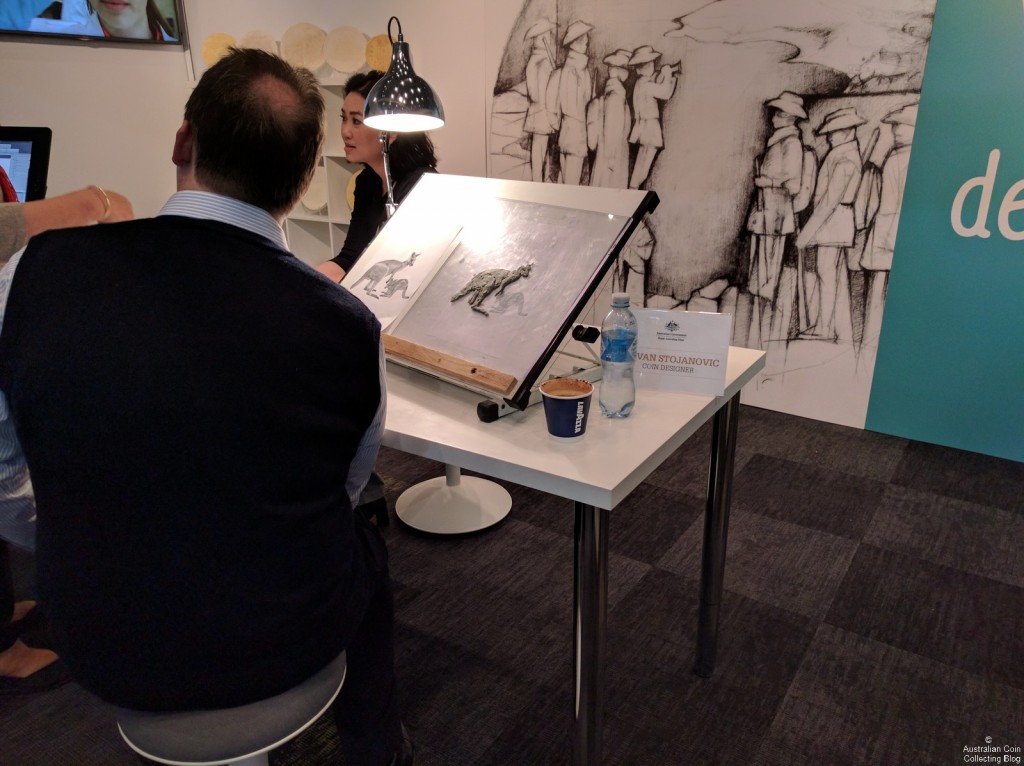 Probably Stevan’s best known work are the triangular ANZAC coins which you can see below along with the actual dies used to strike them. DROOL!  Above the coins are the plasters of the design.  You’ll probably note that the plasters don’t include all coin detail.  That’s because once digitised a lot of the design elements (like legends or flowers or other simple things) are added using a coin computer aided design program on the computer.  Once the designer is finished with the designs they are transmitted directly to the RAM tool room where a CNC machine cuts the dies. 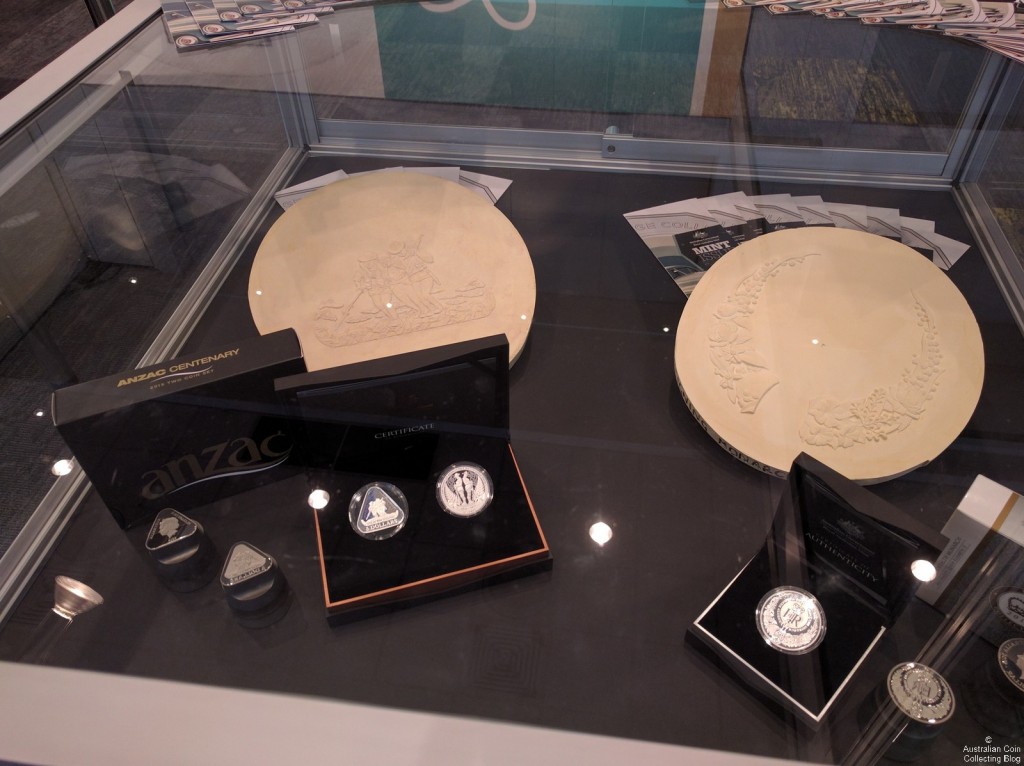 The second designer I spoke to is responsible for this: 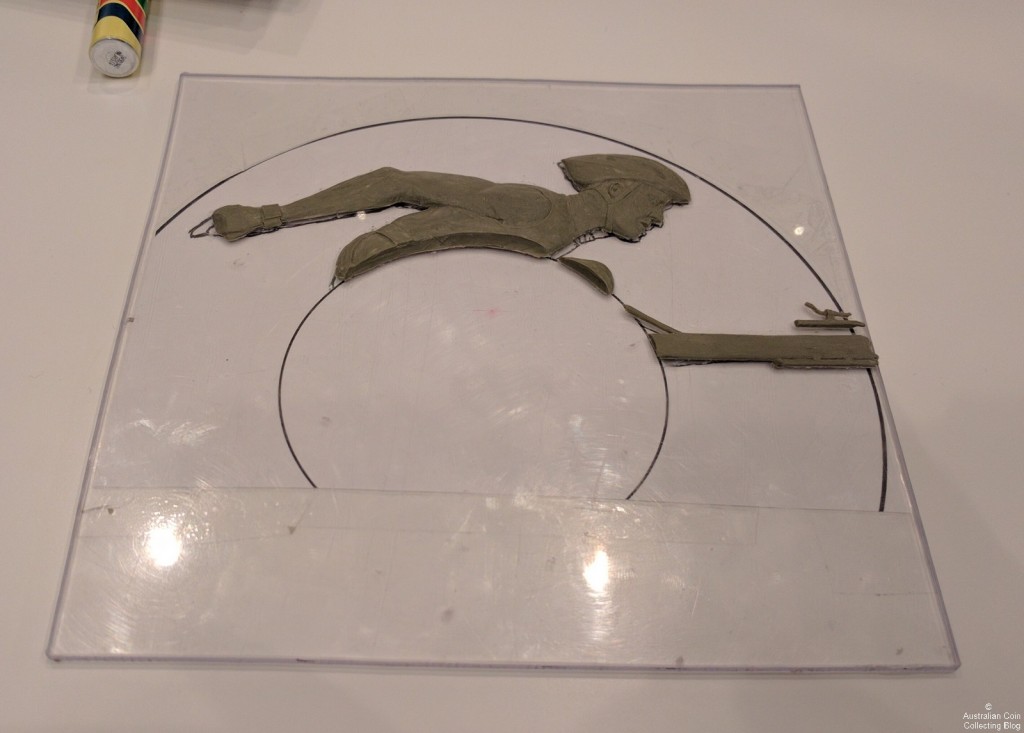 Which might not be immediately familiar unless I showed you this: 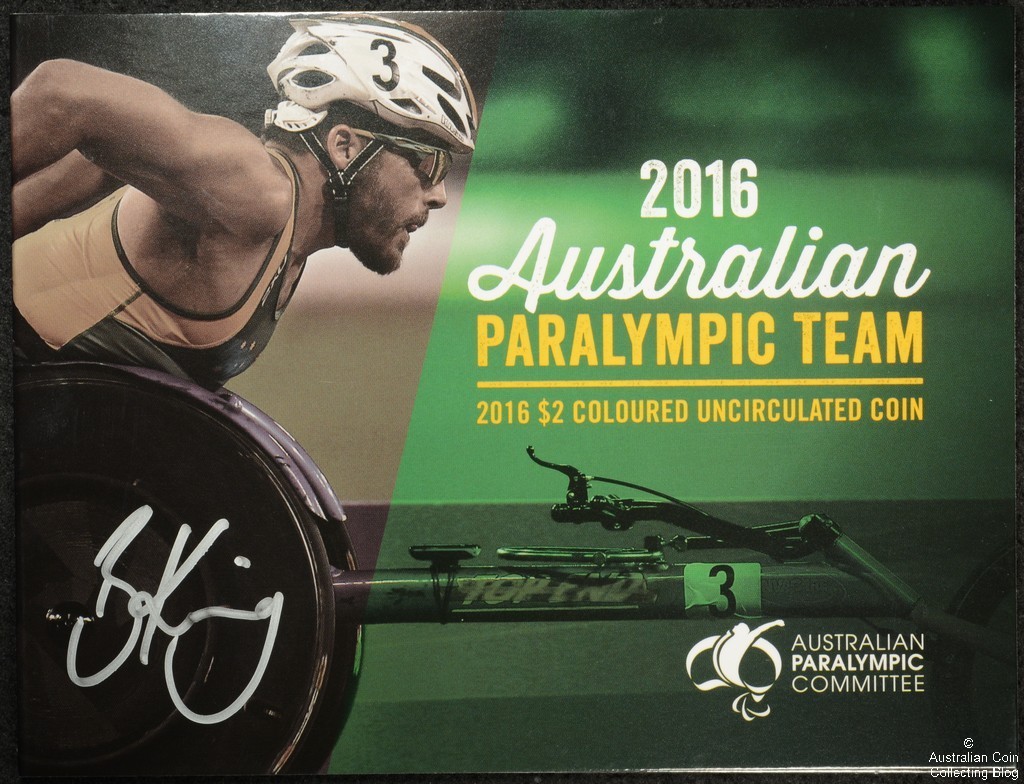 Yes, it’s a sculpted element used on the reverse of the multi-coloured 2016 Paralympic $2 coin.  That same coin that has whipped us all into a frenzy in the last couple of months as we climb over the dead bodies of those who get in our way to collect them from Woolworths.  Perhaps I exaggerate slightly when I speak of dead bodies but it certainly has been a frenetic few weeks as collectors have been gathering the $2 Olympic coins from good old Woolies.  The person who sculpted the design above and designed the rest of the coin can be seen below (yes I managed to get a picture of the front of her head). 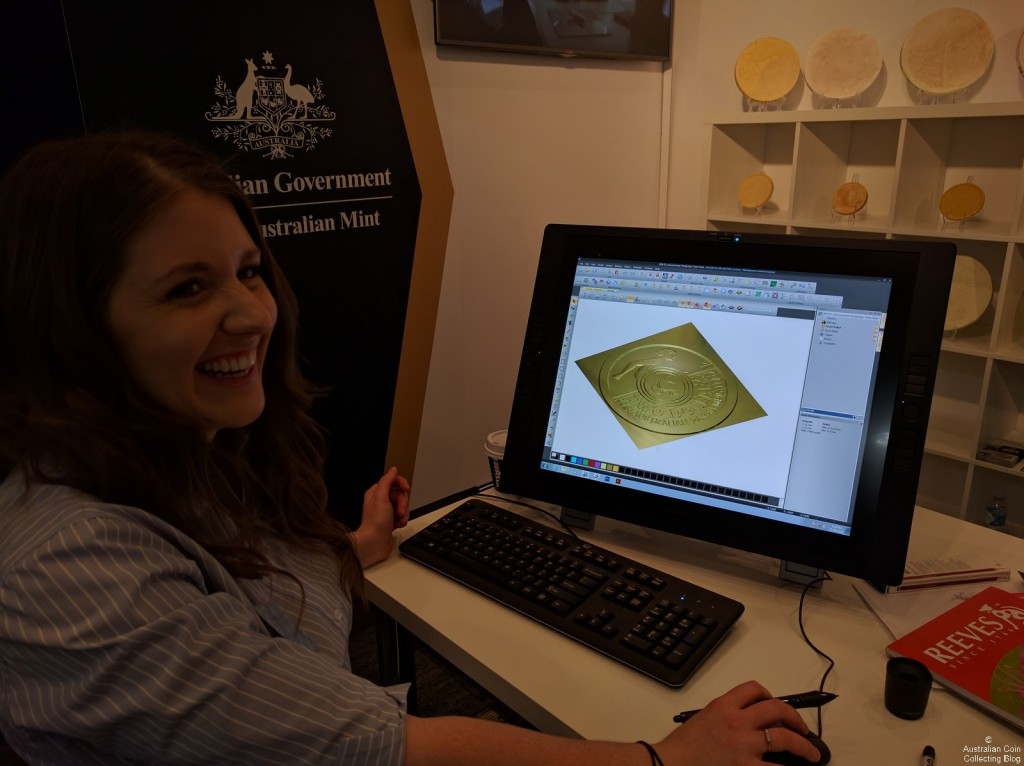 Bronwyn King designed the multi-coloured $2 Paralympic coin, and for that matter ALL of the coloured Olympic coins that were released through Woolworths. On the screen in front of her you can see a digital representation of the reverse of the Paralympic coin. Almost all of the elements you can see were never actually sculpted in plaster or clay, but only ever existed on the computer before manufacturing dies were cut. Behind Bronwyn’s computer you can see a rack of coin plasters, which were the way coins used to be designed. 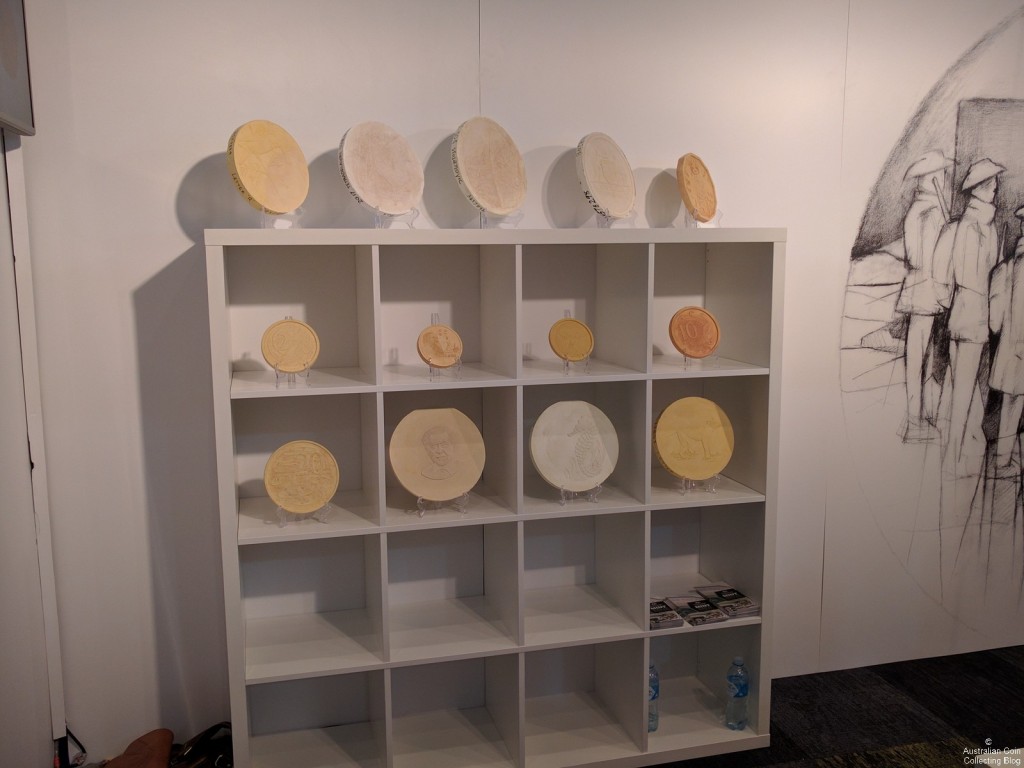 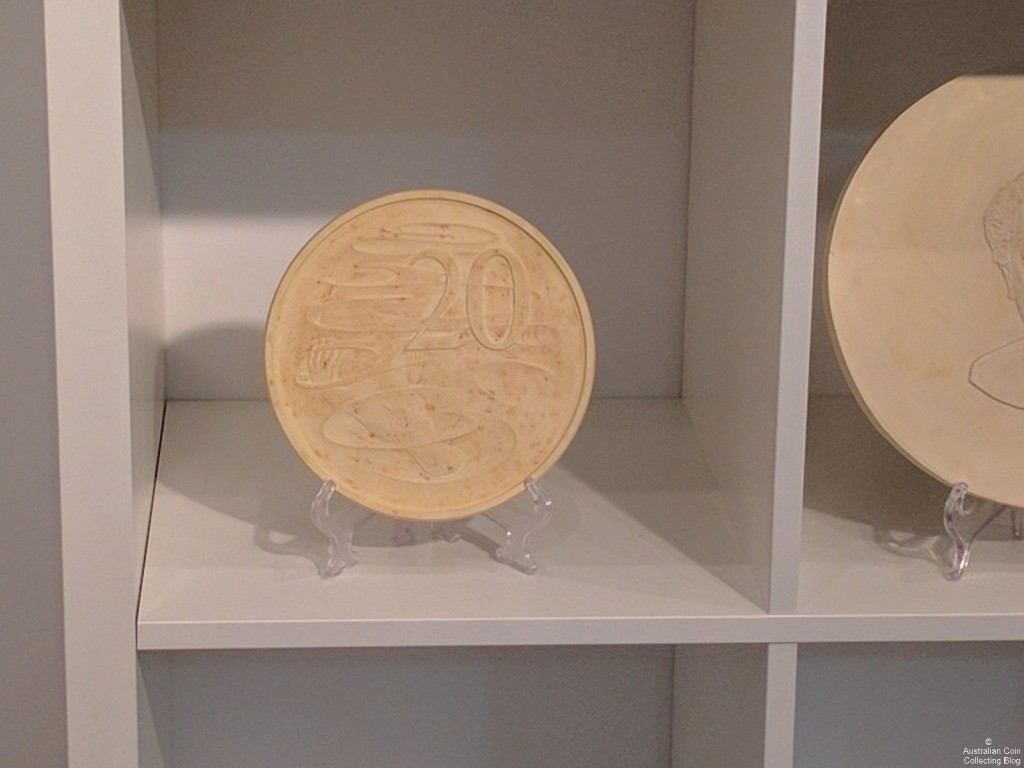 Coin designers would work in clay and plaster to create their design. From those plasters, moulds are made, then resin casts made from those moulds. Those resins were used in pantograph reducing lathes (like the Janvier machine) to transfer the designs into metal. On the rack above is an incredible slice of history showing how coins were made at the RAM in the recent and not so recent past. Amazing stuff!

So, that’s the 2016 ANDA Money Expo held in Melbourne. I hope I’ve given you a taste of what the day was like.