We were in Melbourne this last week for four days attending our first full Downies Coin Auction. We’ve visited Downies on many occasions before, attended auction viewings and other Australian public auctions but this was our first full auction attendance at Downies. Auction #317 was the second auction held by Downies this year and comprised nearly 3,500 lots. Types of lots included coins (duh), banknotes, military medals, tokens, agricultural medals, stamps, books, postcards, cigarette cards, and memorabilia such as documents and movie collectables. The auction itself ran from 2pm of the afternoon of Tuesday 8 July and concluded at about 5pm on Thursday 10 July. Lots could be viewed all of last week (30 June to 4 July) and on Monday and Tuesday of the actual auction week. Priority was given to interstate visitors for viewing on the Monday and Tuesday.

We thought it would be good to present our report for this auction in the form of a day by day diary rather than as a simple report. That way we would give people an idea of what it was like to attend an auction of this scale from the eyes of first timers like ourselves.

Our flight was due to leave for Melbourne at 6.10am and wouldn’t you know it, our car had a flat battery. I still think of it as a new car but just 3 weeks out of warranty the cold Adelaide winter morning got the better of it. And of course it was blocking our garage preventing us from getting out the spare car! So there we were at 4.30am pushing the dead car down our drive (after failing a reverse jump start) and parking it on the road. The pair of us (and our luggage) were hastily packed into our other vehicle and we dashed for the airport about 15 minutes behind schedule. After parking our car we found the security line snaking all around the terminal and virtually out the door into the dark cold morning. Of course it was, the first day of the school holidays here, not something we’d planned for either. Thankfully the line moved quickly and we arrived at our gate with enough time to spare to take a deep breath and board the plane.

The flight itself was smooth and quick but due to congestion we ended up doing circuits of Melbourne airport for nearly as long as the actual flight took and then spent some time on a tarmac waiting for a big A380 super jumbo to land. Regardless, we disembarked, collected our bag, and got straight onto an Airport Express bus and arrived at Southern Cross Station in the Melbourne CBD at around 9.00am. We caught a transfer to our hotel, checked in, gathered ourselves and freshened up before heading to our favourite Melbourne coin store for a couple of hours. We’d decided to do this BEFORE viewing auction lots because it was going to be quick and it’s an easy way of getting into the “coin mood”. After picking up a few coins we headed out for lunch to fuel up and made our way to Downies in the Block Arcade which is on the corner of Elizabeth and Collins Streets. The auction rooms are downstairs from the main arcade with the stairs right by the Elizabeth Street entrance to the arcade.

The viewing room is a brick lined vault-like space set up with an open rectangle of trestle tables and chairs. The tables are decked with desk lamps, auction catalogues, bidder registration forms, and lot viewing forms. To view a lot the viewing form must be filled in with your name and address and in the space provided you must fill in the lot numbers you want to see. Downies staff collect the forms periodically and fetch your lots from storage and mark the form to show that you have received the lot. Once viewed each lot is collected by the staff member and then crossed off your viewing list. Make sure you’ve worked out which lots you want to view BEFORE attending the session because you’ll want to spend all your time looking at lots rather than browsing the catalogue. Also make sure you take your loupe, a pen and notepad, and of course, a drink to keep yourself refreshed. Take notes on each lot you view that you’re going to bid on and don’t be scared to ask for a lot back if you want to look at it again a bit later. We looked at perhaps, 100 lots between 1.30pm and 5:00pm and had to leave at closing time with plans to return the next day.

After a quick brekkie at “Brown Bagels”, our favourite Melbourne specialist bagel hole in the wall cafe we headed back to the Block Arcade for another viewing session. 9:30am opening time with priority for interstate viewers we were set for another 2.5 hours of solid viewing to get through as many lots as we could. It’s best to take a look at a lot in person than to take a gamble during the auction. Winding up just before midday it was time to have some lunch before the start of the auction.

Just before 2pm bidders flooded into another room underneath the Block Arcade setup with seating and a row of trestle tables at the back with a table up front for the auctioneer and his assistant. We’d already registered to bid but those that hadn’t could do so with the staff out the front and once that was done you are ready to show your hand. Before the actual auction could start the auctioneer had to run though details about the session including lot corrections or withdrawals and bidding rules. We were also warned to turn our mobile phones off or be “fined” during the auction if it rang! We immediately put our phones on silent and took advantage of the free internet available. Strongest prices achieved were the decimal error coins with examples of wrong planchet 10c on 5c errors fetching $2,800 and $2,900 each on $750 estimates to an anonymous phone bidder. Clearance rates in the decimal section was well over 97% with very very few unsold lots (15 unsold/706 lots). 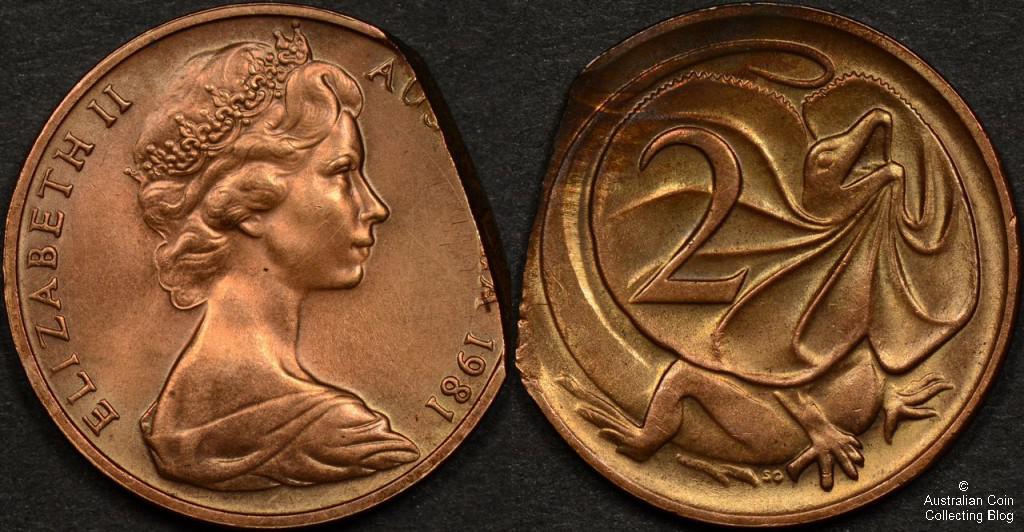 The great thing about an auction with such a broad range of lots is that you can skip entire sessions if the content isn’t your thing. So we took advantage of the militaria, token, medallion, cigarette and sports card section to wander the city checking in on other dealers such as Peter Strich Stamps and Coins who is on the cusp of retirement. After morning tea with our friends from the Numismatic Association of Victoria we grabbed some lunch and headed back for the afternoon proclamation, Australian gold coin, and pre-decimal coin session. One of us had wanted to head back to the auction earlier for the taxidermy section to bid on a stunning lot comprising of stuffed mice fishing off a model yacht but sadly for one author (and happily for the other) we missed out. To the proud new owner one of us hopes they bring you great joy. The other author hopes you don’t get fleas from it. 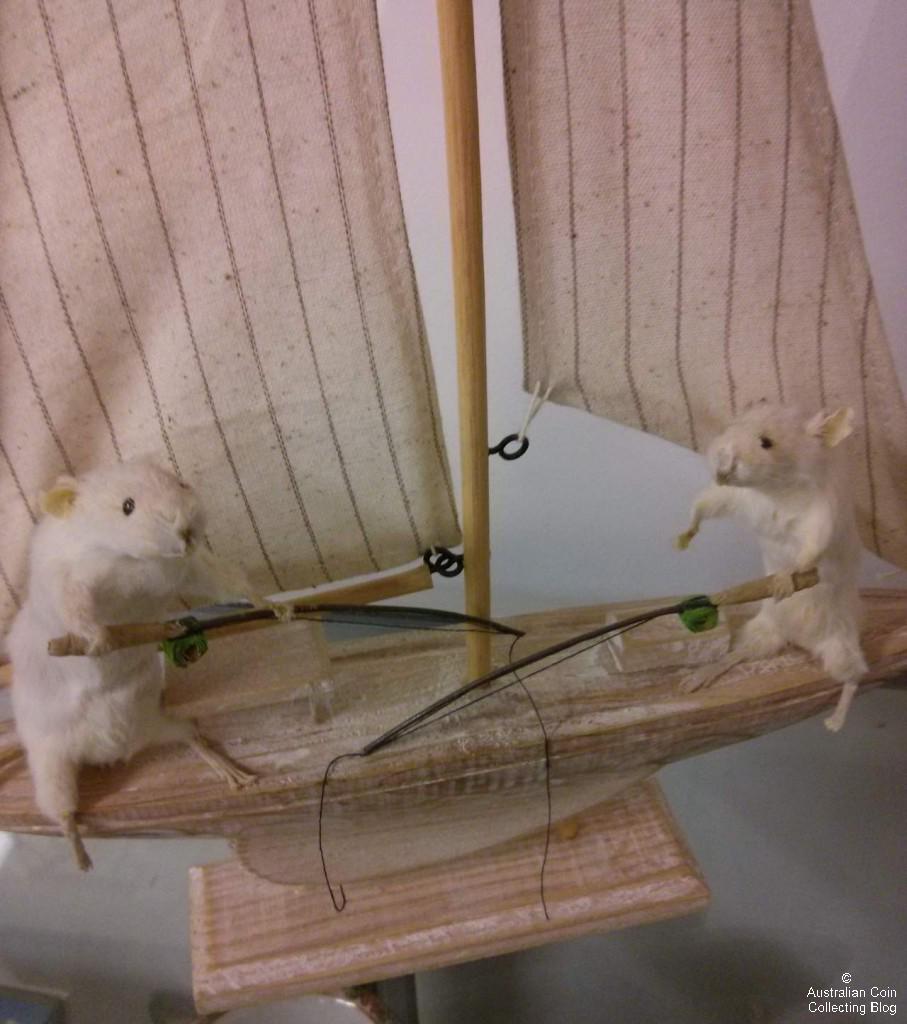 Highlight of the Taxidermy section -a pair of fishing mice

The afternoon session began with a higher unsold rate than we’d seen the day before but the pre-decimal proof coins 1925 to 1963 proved strong with some very high value examples finding new homes. Two proof 1937 crowns sold for $18,000 and $20,000 respectively and a 1938 proof for $27,000 plus the 19.25% buyers commission added to every sale lot. A highlight of the pre-decimal section was a very sorry looking 1930 penny but with an amazing story behind it. $5,200 bought a genuine 1930 penny, holed at the top, worn by an Aussie digger through WWII around his neck with his dog tags, it was so named his “lucky penny”. It was worn by the vendors grandfather and was attributed to getting him through the war and home alive. It’s fair to say the new owner paid about $1,500 for the coin and the balance of $4,000 or so for the story. We’re sure it will sit beautifully in someone’s militaria collection.

We left the auction at the close of business and had a meal with our coin friends. Another great thing about attending this kind of auction is that it brings together collectors and dealers countrywide and also one dealer of note from New Zealand so a catch-up was always going to happen. A great meal, a good laugh and a chat about the ups and downs of coin collecting and the coin market made for an interesting evening out.

The final session we attended dealt with world coins. We arrived at 9:30am and noticed immediately that the session was going to be quieter than the day before. There sure are very different collectors in the different auction sections and this morning began with ancients and Chinese coins. A large Chinese silver pattern dollar of 1907 in PCGS MS63 caught our eye with lovely iridescent blue toning and it certainly caught the eye of bidders. Bidding was fierce with bidders on the phone influencing the high prices achieved. The rest of the Chinese material sold strongly including a number of lots of medals and amulets that (apparently) had not seen the light of day since the early 20th century. Once the Chinese material concluded quite a few people left and things settled down to a steady pace for the remainder of the session. One thing to note was the lots of packeted world coins that were owned by numismatic author, William Craig. We’d viewed a few of these lots and they were not what we’d consider the highest quality, but all of them cleared and some fetched some strong prices.

Once the session had finished we were done and grabbed some lunch and made our way to the airport. The afternoon session was banknotes which we missed but take a look at the Downies Auction Report from Sterling & Currency.

The trip home worked out much better (clearly Murphy wasn’t watching). Through a series of happy coincidences we managed to get onto a flight that left two hours earlier than we had planned. This meant we arrived home early enough to stop for a leisurely Indian meal before walking through our front door at about 7pm. Trip Over!

What We’d Do Differently Next Time

We did our best to prepare fully for this auction including doing market research on coins we might be interested in. This proved to be incredibly useful while viewing. However, we hadn’t looked at the catalogue closely enough and we realised during certain sessions that there were other lots we really should have looked at. During the viewing itself we were careful to inspect every lot we had marked before hand but still somehow we managed to miss looking at a number of coins, and then miss them again when we worked through the lots to make sure we’d seen everything. Next time we’ll have to use a coloured highlighter to mark lots to ensure we don’t miss them. The final thing we did wrong (well not we, just one of us) was bid on something we hadn’t looked at. Never ever do that. Even though this time it worked out OK (one of the authors is snickering now) next time it could be a disaster.