Those of you who entered the Royal Australian Mint ballot for the For Valour Victoria Cross Ten Dollar coin should now know if you were successful and hold the new release in your hand. If you weren’t successful then you should have received confirmation and be on the waiting list for available coins if they aren’t purchased by their selected ballot winner.

How long to hold onto such a coin is the biggest question given it’s popularity. I’ll go so far as to say this ballot is the most successful the RAM has run in recent times with interest from coin collectors, military enthusiasts far and wide and those who want to share in the Anzac centenary experience. From a small entry sample size of 3 in my own extended family we were successful in purchasing just one coin which agrees with the Mints statistics that they received 13,000 ballot entries for a coin with a 5,000 mintage.

For an outlay of $112 I was able to purchase one of these coins, and there was never a question that I would turn down the offer if given. I eagerly opened the box hoping with fingers crossed that I had received certificate number 100 (there are 100 VC recipients, their names on the coin). It wasn’t to be, the coin, a stunning antiqued bronze beauty eagerly awaiting being held, loose in the box. Without a capsule the coin is asking to be held which is the idea behind it’s manufacture. It’s antiqued bronze finish and large medallion-like size intended to be a tactile experience for collectors, light handling not likely to affect the finish -just like you’d hold a Victoria Cross medal itself.

Should I hold onto this new coin is the next BIG question. A ten dollar coin doesn’t, at all, fit into what I collect and they have proved poor investment purchases in the past. Many $10 silver decimal issues are generally traded well below their issue price at their silver content and don’t hold a numismatic value. It’s the theme here that has added to the success of this coin. Currently sales on auction site eBay see this coin selling for upwards of $600 with other website dealers allowing me to add 10 of these to my shopping cart at $699.99 (presumably that’s an error and they don’t have that kind of stock). You’d think though that once the excitement and hype has settled down so too will the price but time will only tell. This has been a good investment so far. 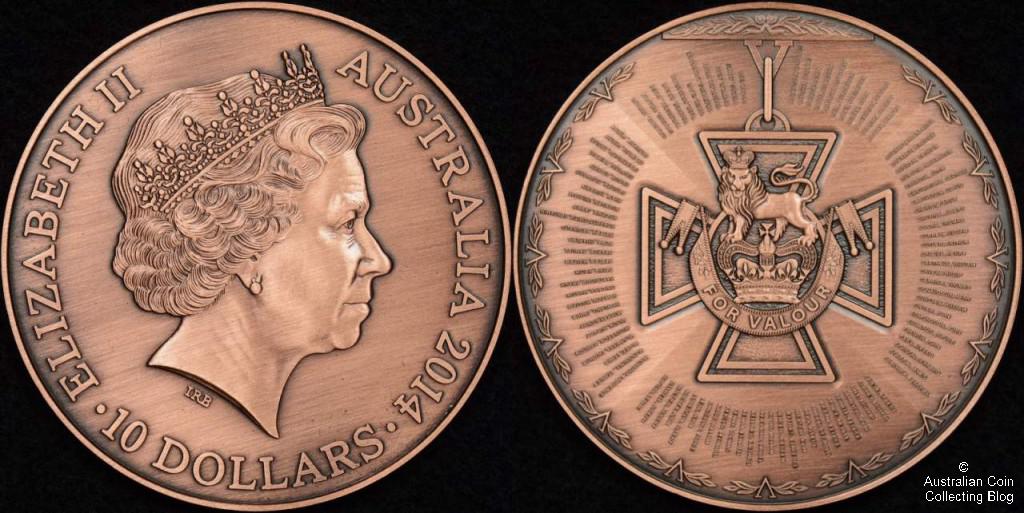