It you’re new to coin collecting in Australia then you’re probably aware by now that most Aussie collectors collect pre decimal coins in one form or another. It wouldn’t surprise me though, if you’re not exactly sure exactly what exactly is an Australian Pre Decimal Coin. And that’s not actually too unusual because it’s now rapidly approaching 50 years since the pre-decimal coin era finished. I’m 43 and I have exactly zero memory of seeing any pre-decimal coins in circulation.

So What is an Australian Pre-Decimal Coin?

The most generally accepted definition is that an Aussie pre decimal coin is any coin that was minted for circulation in Australia and is dated between 1910 and 1964. Pre-decimal coins were minted for Australia during this period in Australia itself (in Sydney, Melbourne, and Perth), in Great Britain, in India, and in the USA. Coin denominations minted were the halfpenny (1/2d), the penny (1d), the threepence (3d), the sixpence (6d), the shilling (1s), the florin (2s), and the crown (5s). There were three basic units of currency, the pound (£), the shilling (abbreviated with an s), and the penny (abbreviated with a d). Two half pennies made up penny. There were 12 pennies to the shilling and 20 shillings to the pound (£) sterling. Thus there were 240 pennies or 10 florins to each pound.

Reverse Designs of the Crown,Florin, and Shilling

Coins were minted in Bronze (the penny and half penny) and in silver alloy (threepence, sixpence, shilling, florin and crown). The silver coins had what is known as an intrinsic silver value due to the silver bullion each coin contained. The exact silver value of each coin depended on the year it was minted as silver coins dated prior to 1946 were minted in an alloy that was 92.5% silver while those dated from 1946 to 1964 was a 50% silver alloy. The bullion value of silver pre decimal coins is easily worked out using this calculator.

The design of our pre decimal coins did not remain stagnant. The obverse (or heads) design changed each time the reigning monarch of England changed. Portraits of Edward VII, George V, George VI, and Elizabeth II adorned the coins at one time or another. In addition, commemorative florins issued in 1927 and 1934 had slightly different portraits of King George V than what was seen on other coins. The reverse (or tails) side of pre-decimal coins underwent a major redesign in 1938 and 1939. The reverse designs of all the coins except the halfpenny changed in 1938 and that coin changed in 1939. The exception here is the crown (or 5 shillings) coin which was only minted for 1937 and 1938 and the design was the same both years. 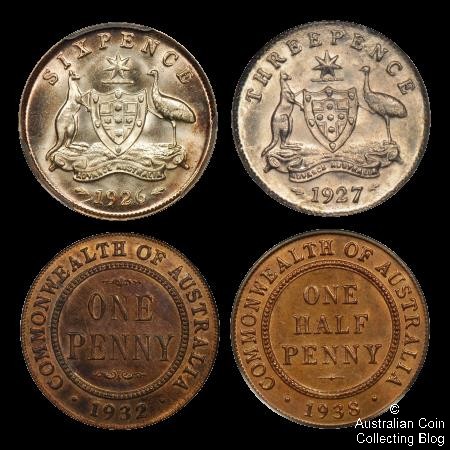 Reverse Designs of the Sixpence, Threepence, Penny, and Halfpenny

On February 14, 1966 the pre-decimal era finished in Australia and the decimal era of dollars and cents began. While it’s nice to think that there was an instant change the reality was that pre decimal coins were assigned an equivalent value in dollars and cents and continued to circulate for a number of years after 1966. But the numbers dwindled fairly rapidly. My parents tell me that while it wasn’t common, it wasn’t actually that unusual to see florins in your change until the mid 1970’s.

If it was up to me I’d include Australian minted gold sovereigns and gold half sovereigns in the definition of what makes up an Australian pre decimal coin. Both coins are 22 carat gold. Half sovereigns contain a bit under an eighth of an ounce of gold, are about the size of a modern five cent coin and were valued at half a pound or 10 shillings. Sovereigns are twice the weight of a half sovereign containing fractionally under a quarter of an ounce of gold, were valued at a full pound (or 20 shillings) and are a couple of millimeters in diameter smaller than a ten cent coin.

Sovereigns and half sovereigns were minted for circulation in Australia from 1855 until 1919 (in the case of halves) and 1931 for the full sovereigns. During this time they were minted at the Australian branches of the Royal Mint in Sydney, Melbourne, and Perth.

What I’m Not Including in Pre-Decimal Coinage

I’m going to exclude any English coinage that might have circulated in Australia in the second decade of the 20th century and prior to this period. While British coins did circulate here in that period they are not intrinsically Australian and cannot be classified as Aussie predecimals. To my mind these coins are British and should be collected as such. Of course they could easily be included in a collection of “coins that circulated in Australia”.

I’m also going to exclude colonial coins such as Adelaide Pounds, Assay Office Ingots, traders tokens, Taylor gold tokens, holey dollars and dumps, and proclamation coins. While it could be argued that all of these coins are “pre-decimal” because they were valued in pounds, shillings, and pence I believe they fit neatly into another category of collecting. That of Australian Colonial coins and Proclamation Coins.