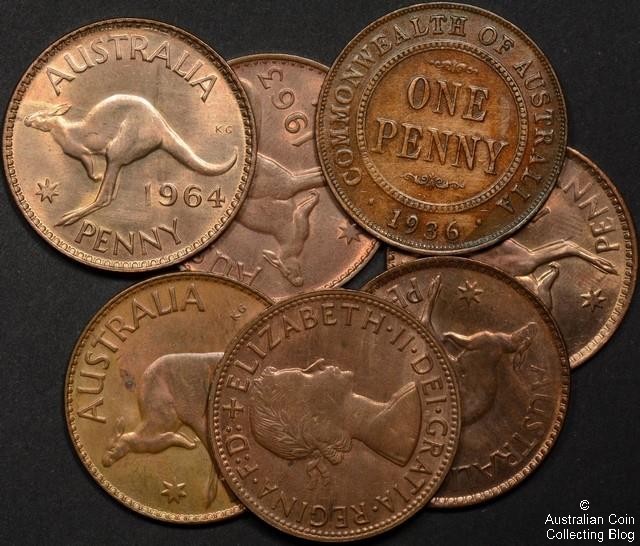 You’ve found a bunch of old brown coins hidden away or in a drawer and you’re wondering if they’re worth anything?

Do Australian Pennies Have any Value?

The tails side of an Australian Penny either says “Commonwealth of Australia” and “ONE PENNY” or shows a kangaroos facing left with AUSTRALIA above and PENNY below. On the head side we might see the Kings George V, VI or Queen Elizabeth II. The Australian Penny was issued with the dates 1911 to 1964 and the diameter should be 30.8 millimeters. Aussie pennies should weigh 9.45 grams, but this can vary by up to half a gram and a worn coin that’s been in many pockets would typically weigh less.

So What are the Valuable Australian Pennies?

There are three key dates to look out for when looking through Australian Pennies and trying to work out their value.

The 1930 penny is not only the best known Australian penny, it’s almost certainly the best known Australian rare coin. It also happens to be one of the most valuable Australian pennies. It’s very unlikely that you’d find one of these. However, if you do find a penny dated 1930 and your coin doesn’t say Commonwealth of Australia but features a lady sitting on a rock facing to the right of the coin and holding a trident then it’s a British 1930 penny. These are often used to fill a hole in a set of pennies. By the way, that lady on the rock? That’s Britannia, the female representation of Great Britain. 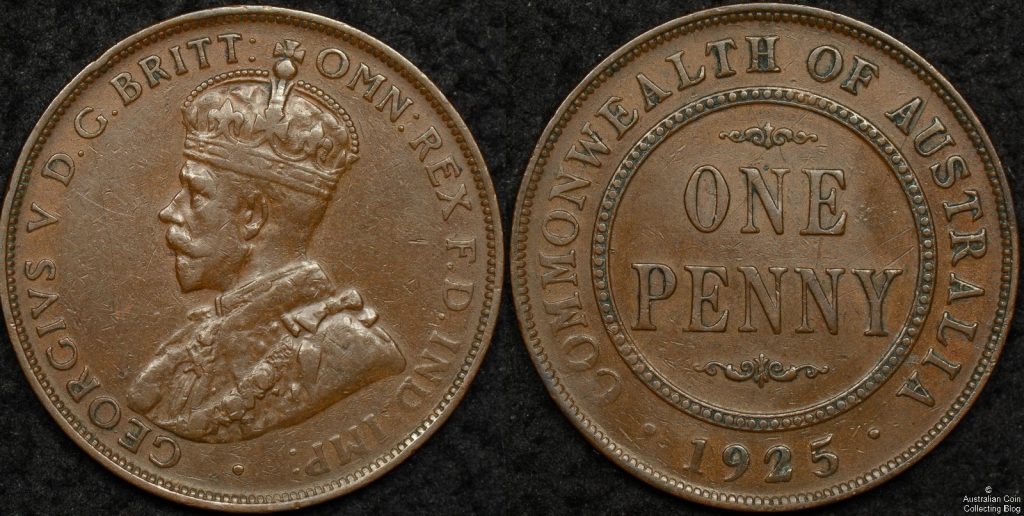 If you’ve picked out all the 1933 pennies, you’ll need to look very closely at the last 3 in the date and you’ll probably need some sort of magnifying glass or loupe. If, beneath the 3 it looks to have a curve at the top that might have once been a 2, then you could have found an overdate. Read more about overdates here.

There are many fake or counterfeit coins bearing these dates so if you do find a valuable penny then you’ll need to have it evaluated by an expert. A good coin dealer can determine if it’s genuine and grade your coin. Sometimes they’ll do this for free, other times they may charge a small fee to do so.

There are also some varieties to look out for and if you’re keen to know more you should pick up an Aussie coin catalogue or head to your local library and borrow a coin book to read up on what to look out for.

Grading and Storing your Pennies

To more accurately determine the value of your Australian penny you should be aware it’s ALL about condition. A bright orange/red coin with full design details present that looks as good as the day it left the Mint will be worth considerably more than an old brown worn penny. Pennies are made from bronze and left the Mint looking a bight orange/red. They’ve turned brown over the years with exposure to the environment which is called toning.

But don’t be tempted to clean your pile of pennies, this will significantly reduce their value.

Giving them a brighten up with a soak in Coca Cola or a polish up with Brasso is a huge no-no. Coin collectors and dealers can tell immediately if a coin has been cleaned and this will dramatically reduce the value of your penny.

You can look out for pennies with green spots, this is called verdigris and is a kind of copper cancer which will spread. Any coins you find with this green verdigris present should immediately be removed to a quarantine bag so it doesn’t spread to the other coins.

If you’re not a coin collector and don’t have the proper coin storage accessories then a polypropylene bag such as a food grade zip lock bag will be adequate to store your coin horde in.

Keep in mind the more the coins jostle about together the more worn they become so any better looking coins might best be stored in their own bag.

So what’s the value of this pile of Australian pennies?

Now that you’ve removed the key date coins and any that need further investigating or quarantining, what’s left? A pile of bronze. If you take those to a coin dealer then you’ll probably be offered a price per kilo or perhaps a small price per coin for your pennies..