The 2 dollar coin has long been the ugly duckling for collectors of Australian decimal coins. However, since the release of the purple striped coronation coin in 2013 and the ensuing deluge of coloured 2 dollar releases we thought we’d have a close look at various Australian 2 dollar coin values. Before we get going, there’s a couple of things to note. Firstly, the VAST majority of 2 dollar coins you find in change are worth……$2. Secondly, the Australian 2 dollar coin values we’re giving in this article are estimates made at time of writing, which is November 2018. Actual values will vary and final values are only realised WHEN YOU SELL your coins. 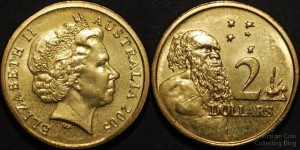 The standard $2 design (seen above) has been issued from 1988 to date. The latest version of the Pocket Guide to Australian Coin and Banknotes lists the UNC values for various years ranging from $3 to $25. Remember these are for brilliant uncirculated coins either taken directly from a roll or from a mint set. What does that mean? It means any standard design $2 coin you find in change is worth…..$2. Sad but true. Even if you do have an ex-roll or mint-set coin the REAL value of your coin is ABOUT HALF the catalogue price, because catalogue prices are retail and include dealer’s profit. 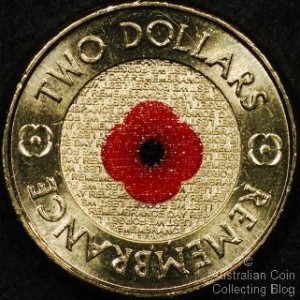 In 2012 the RAM released it’s first commemorative 2 dollar coin design, the remembrance poppy. They released a non coloured version for circulation and a coloured version via the RSL. Supposedly the RSL version was for circulation but it never actually did circulate and the paint technology used wasn’t up to circulation anyway. Catalogue value for the coloured versions are $13 but at time of writing you could easily get $30-$40 for the non-mint marked red poppy coin on eBay. The non-coloured poppy coin had no CV listed in the catalogue but a quick search of eBay lists the value as $5 or so for a circulated coin up to about $30 for a brilliant uncirculated example. 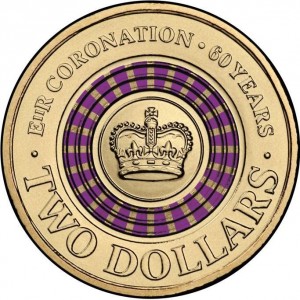 The 2013 Purple Coronation 2 Dollar is really the coin that kicked off the surge in coloured 2 dollar coins. The first proper Australian coloured coin for circulation it was not initially hoarded and the low mintage of 2,000,000 coins means it’s worth multiples of face value. CV for an UNC coin is $12. Again a quick search of eBay indicates this is on the low side, with circulated examples commonly selling for $10-$20. A true uncirculated coin would easily sell for $25-$30. 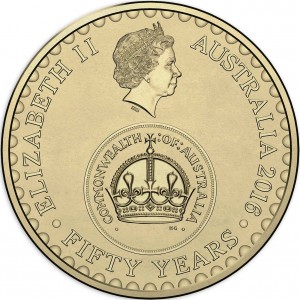 With a mintage of just under 3 million the 2016 Decimal Changeover 2 Dollar is still routinely found in change. Too new to have a CV listed the coin looks to sell for $5-$10 ex-mint bag. Taking this into account we’d suggest a coin found in circulation is likely to sell for $2-$5 on that august 24 hour garage sale, eBay. 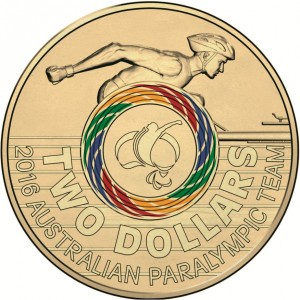 Since 2013 we’ve been swamped with coloured 2 dollar coin releases, these started with the 2014 green remembrance coin, the 2015 red striped lest we forget 2 dollar, the 2015 orange striped remembrance 2 dollar, and followed in 2016 by five separate coloured Olympic coins and a Paralympic coin. 2017 saw at least 5 more coloured releases (Lest we Forget, Remembrance, and 3 Possum Magic coins) and 2018 has seen several more releases. There’s actually been so many coloured releases in the last 4 years that the actual values of the coins don’t seem to vary too much at all regardless of the design or colour. Find one in circulation and pop it up onto eBay and you’ll likely get anywhere from $2-$5 for it. Hardly the goose that laid the golden egg, but still worth pulling coloured coins out of change as you find them. 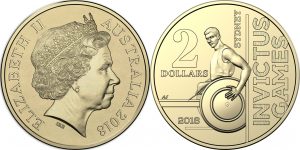 It’s only been a few weeks since our newest non-coloured 2 dollar coin was released, the 2018 Invictus 2 Dollar. Available in quantities in rolls and mint bags uncirculated coins are not hard to find. The current going rate on eBay is around $5 per coin and this is unlikely to change much.