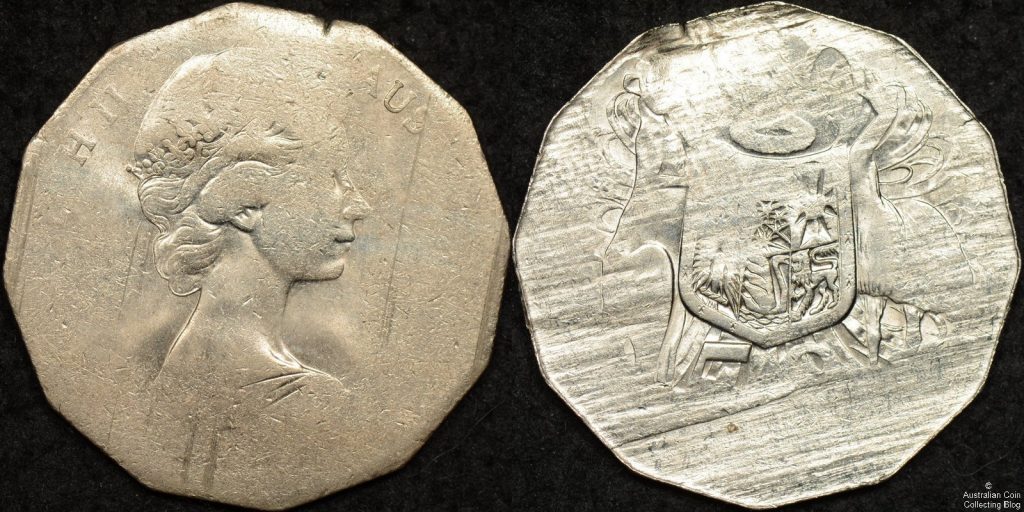 From 1969 to 1984 Australia used the Arnold Machin portrait of Queen Elizabeth II on coins and the distinctive 12-sided dodecagonal shape for the 50c piece. Missing design on this error coin means we cannot be more precise than to date it within this 16 year range.

Weighing in at 8 grams, just over half the mass of a standard 50c (which should weigh 15.55g) this coin is also only about half the thickness that it should be. This is apparent in the dramatic strike weakness seen across both sides of the coin. The legends are missing almost completely around the portrait and the numerals 50 on the reverse are barely visible. It’s interesting to note that weakly struck coins like this one often show better strength of strike in the centre of the coin radiating to more prominent strike weakness at the extremities.

Looking closely at the reverse we can see that the surface of the planchet shows parallel metal striations. This indicates that the cupro-nickel planchet had split in half prior to it being struck. Coin blanks are punched from sheets of metal rolled to the correct thickness. When the blank for this coin was punched out of that metal it contained a flaw in the material that ran parallel to the faces of the blank. At some point after the blank was cut but prior to the coin being struck the coin blank fell in two pieces.

This meant that an approximately half thickness blank was fed into the coin press and when struck considerable strike weakness occurred. This was simply because there was not enough metal to fill the dies for a fully struck coin to emerge.

Coin blanks do fall in half on occasion and it is more common to see a coin split after it was struck. This results in half a coin with one side having a striated appearance and the other side being struck with a design (obverse or reverse) as usual. It is very rare to see an Australian coin such as the 50 cent here struck on a planchet that split before the striking process.

These values are updated hourly using New York market prices. Coin values are purely the value of the gold or silver they contain and do not account for any numismatic value.
Prices Last Updated: 22:04 18 Sep 2021