To view the issues of Australasian Coin and Banknote Magazine (CAB) published in a given calendar year click on the links in the table below. You will then be shown each issue for the year and be able to view a table of contents for each issue.


Strict Standards: call_user_func_array() expects parameter 1 to be a valid callback, non-static method allow_php_in_posts::shortcode_advanced() should not be called statically in /srv/www/australian-threepence/public_html/wp-includes/class-wp-hook.php on line 286

The Australasian Coin & Banknote Magazine (CAB) was first published in November 1996 by editor and publisher Greg McDonald. CAB seems to have been a joint venture between Greg’s company Greg McDonald Publishing and Numismatics Pty Ltd of Terrigal and Viddy Jermacans of Durrant House Collectables of Tamworth. Cover price was $4.50 and an annual subscription including postage was $45.00. Greg wrote a long initial editorial and was careful to pay homage to the Australian Coin Review magazine, which he admitted to buying the first issue in July 1964 as a small school boy. He goes on to say that it is not his intention to “kill off” his competition but rather to provide a publication with much shorter advertising and publishing deadlines. This would, in his words “allow dealers to offer stock that is ‘fresh’ and not sold weeks before they get their magazine”.

The first issue contained a number of interesting articles, including a length discussion on grading by grading stalwart Klaus Ford, a look at the cartwheel penny, and a short biography of Dr. Arthur Andrews who was the foremost expert in Australian trader’s tokens. 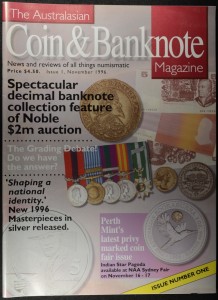 The first issue of CAB was November 1996 and it is still published today by current owner and editor, John Mullhall. Each year of publication has usually seen 11 issues published with a bumper “yearbook” issue released in December most years to cover both that month and the following January. 12 monthly issues were produced in 2000 and 2001.

If you’re a current reader of Australasian Coin and Banknote magazine then you’ll probably have noticed the small “Incorporating Australia Coin Review” on the front cover of each magazine. That’s because in 2002 CAB bought it’s rival publication and merged with them. In fact, the last editor of ACR, Mick Vort-Ronald moved over to CAB as a contributor in the very first merged issue and Mick remains a regular contributor to this day. You can read more about the merging of the two magazines on this page about the Australian Coin Review.

Greg McDonald edited the magazine from inception until December 1997 when Graeme Booth took over. In June 1998 Glen Stephens (of Glen Stephens Stamps) took over both ownership and editorial duties and remained in charge until September 1999. At that time Australian Bull Bank Pty Ltd took over publishing duties and Brian Ahearn was appointed Executive Editor. In December of the same year the magazine changed it’s name to Australasian Coin & Banknote Collectables Magazine but published by Australasian Coin and Banknote with Brian Ahearn remaining as editor. February 2002 saw the amalgamation with ACR and the name changed again to Australasian Coin and Banknote Magazine Incorporating Australian Coin Review, with Ahearn still editing and John Mullhall acting as general manager. In May 2002 John Mullhall assumed editorial duties and remains in that position to the current date. The magazine is still published by Australasian Coin & Banknote Magazine.

These values are updated hourly using New York market prices. Coin values are purely the value of the gold or silver they contain and do not account for any numismatic value.
Prices Last Updated: 20:04 08 Mar 2021