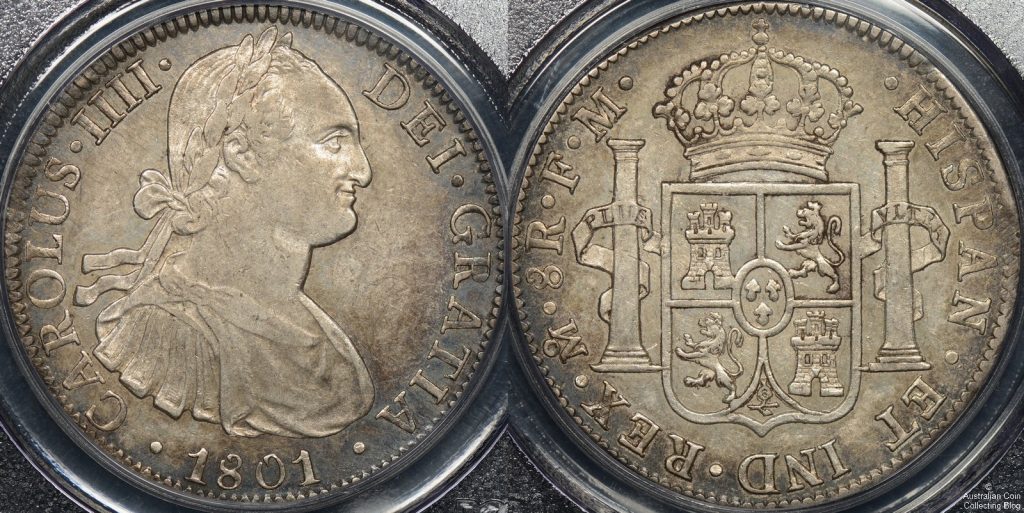 In our previous entry about Australian proclamation coins I mentioned the Spanish Silver Dollar (or 8 reales) which was valued at 5s the proclamation. The 8 reales (or royals) coin of Spain and her colonies was probably the best known coin in the world at the time of Australian proclamation of 1800. Spanish milled dollars (also famously known as pieces of 8) were struck from 1732 until 1826. They are referred to as milled dollars because the planchets were made on a milling machine giving a uniform size and mass. Before 1732 8R coins were created by hammering the design onto irregularly shaped cobs cut from silver bars. From 1732 until 1773 Spanish Silver dollars were minted with the Spanish coat of arms on one side and the familiar Pillars of Hercules on the other, silver dollars from this period were known as ‘pillar dollars’. From 1773 onward the coat of arms gave way to a portrait of the Spanish monarch, coins from this time were known as ‘portrait dollars’. Spanish dollars were minted in several different mints, in several different countries, and with many different assayers initials on the pillar side of the coin. The number of varieties available is well beyond the scope of this article and has been the subject of many books.

When purchasing a Spanish silver dollar I think that originality of surfaces and genuine toning is paramount. Wear, while an important factor, is not critical. A nicely toned VF 8R is a lovely thing to behold and a lot more attractive than a dipped AU or UNC coin. That being said if you can find a toned uncirculated 8R at a reasonable cost I’d be jumping at the chance!. One thing to be aware of with silver dollars of Spain and her colonies is that some date / assayers / mint combinations are rare and can bring high prices from speci