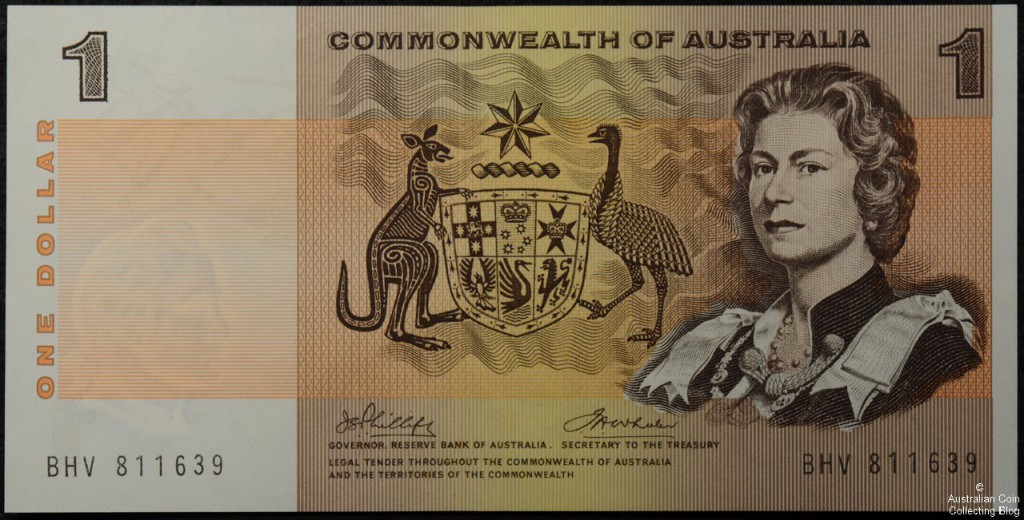 The Australian paper 1 dollar note was issued between 14 February 1966 and May 1984. A dollar coin was then introduced because of the short lifespan of the paper banknote. This proved a major cost saving for the Government.

The one dollar note is a dark brown coloured note with Aboriginal bark paintings on one side and Queen Elizabeth II and the Australian Coat of Arms on the other. It reads “COMMONWEALTH OF AUSTRALIA” on earlier issues (1966-1974).  In 1974 this was replaced by “AUSTRALIA” on both sides of the note. Each note includes two signatures and a unique serial number. The brown colour was chosen as it was the same tones used in the 10 shilling pre-decimal note it replaced.

The signature and serial number on your paper $1 note will, along with condition, determine it’s value. Dollar notes were issued with the signatures of the Governor of the Reserve Bank of Australia and the Secretary to the Treasury. These were H.C Coombs-Roland Wilson, H.C.Coombs-R.J. Randall, J.G.Phillips-R.J.Randall, J.G. Phillips-F. H.Wheeler, H.M.Knight-John Stone and R.A.Johnston-John Stone.

The Aboriginal design is a line interpretation by Gordon Andrews of an Aboriginal bark painting by David Malangi. The then 39 year old indigenous Australian lived off the coast of Arnhem Land and was paid $1,000, presented with a medal of appreciation and given a fully-equipped fishing box for his contribution to the design on the $1 note. The illustration of Queen Elizabeth II in the Regalia of the Order of the Garter was again reproduced by Gordon Andrews from a photograph supplied by Buckingham Palace and taken by Douglas Glass of London. The note features a watermark, the profile of Captain Cook and a metallic security thread. 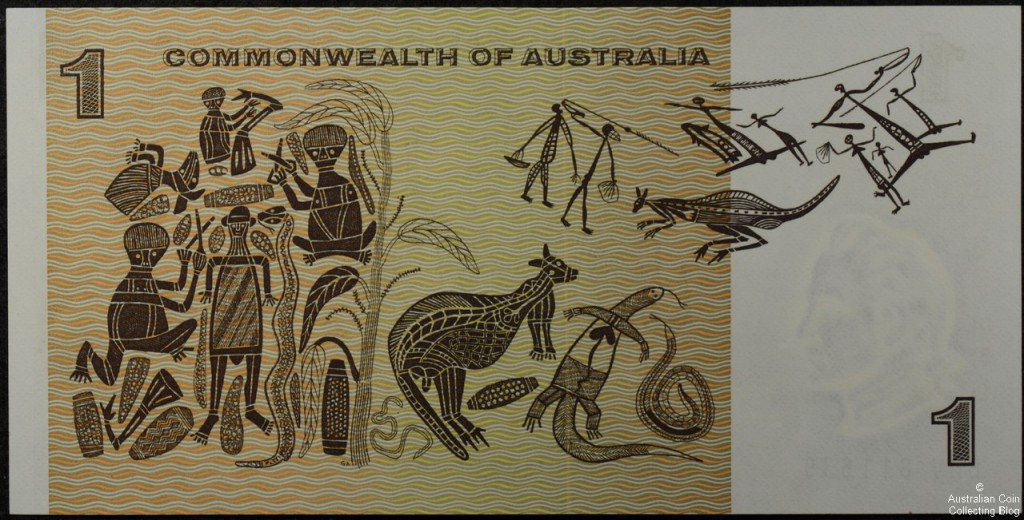 Notes worth looking out for are special replacement notes known as star notes. These banknotes have the last serial number digit missing and is replaced with a * and occur on dollar notes issued from 1966-1971. These notes have been swapped for damaged, spoiled or faulty notes in a bundle and added so the numerical sequence of notes is not changed allowing bank tellers to easily count runs of notes. The serial of the star note does not correspond with the serial number of the note it replaced and always begins with a Z and for the 1 dollar note ZA. A star note commands a huge premium over the value of a standard dollar note.

Paper 1 dollar notes can be identified firstly by their signatures (see above) and then by their serial numbers. Serial numbers can be split into types, general prefix, first prefix and last prefix. First and last prefix notes which are the first and last issues of the series are always worth more than general prefix notes. Notes marked as specimens are also special issues and command a much higher price.

The value of your Australian paper 1 dollar note will depend on the factors already discussed in this article, signatures, serials and most importantly, condition. Once you’ve worked out which type of note you have you can determine whether it is best to take your note to the bank and swap it for a new dollar coin or keep it for collector value. The banknote market has been in decline over the past year or so it is best to check sales figures at coin and banknote dealers public auctions or sites such as eBay for what your note might fetch if sold.