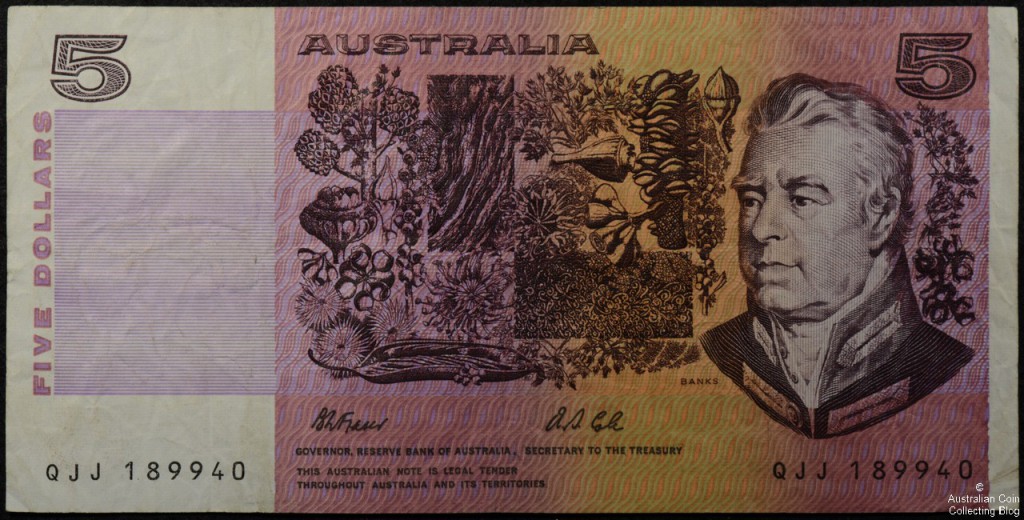 Your Australian paper $5 note value is dependent on the condition (grade) of the note, the serial number and the signatures. Identifying the Australian paper $5 note is easy, it’s colours are purple and black and it measures 150mm x 75mm. The front of the note features botanist Sir Joseph Banks and a collage of Australian flora, this side has the signatures and serial numbers. The back of the note features a portrait of philanthropist Caroline Chisholm with those she helped to early settlement in Australia. Earlier notes read “COMMONWEALTH OF AUSTRALIA” issued 1967 to 1972 when it was shortened to “AUSTRALIA” on notes issued from 1974. 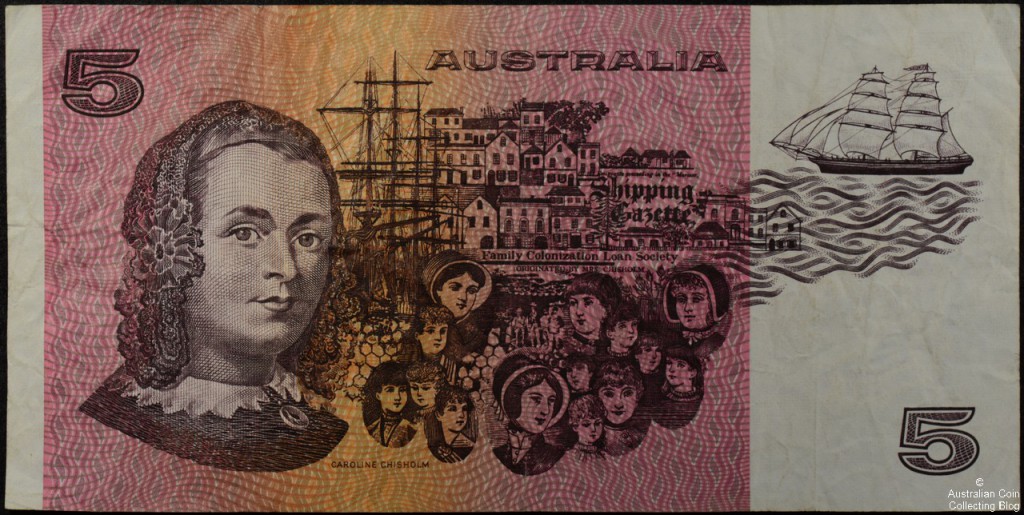 Security features of the paper banknote are a watermark portrait of Captain James Cook and a metal thread running vertically near the centre of the note, you can see these when you hold the note up to the light.

The paper five dollar note was issued on 29th May 1967 just over a year after the changeover to decimal currency on 14 February 1966. This was because it had no exact equivalent pre-decimal note so it was held back so as not to confuse the public. The paper note was continued until July 1992, then in 1993 the Aussie five dollar note was completely redesigned and issued as a polymer note, with Australia no longer issuing any paper banknotes.

There are 9 signature combinations of the Governor of the Reserve Bank of Australia and the Secretary to the Treasurer on the paper five dollar note.

The serial number, of which there are two, begin with 3 letters and end with 6 numbers. The first 3 letters which are the prefix can help us determine a notes value. Banknote values differ for each of the serial number categories, first prefix, last prefix and general prefix. First and last prefix are those notes issued first and last and are more collectable than the general prefix notes in the middle. Regarding the serial number, some collectors keep notes with interesting serial numbers. These include sequences that appeal to the market such as a radar or repetitive numbers or different denomination notes with the same numbers. Groups of consecutively numbered notes are also worth a premium. There are also special framed note issues, portfolios and uncut notes and sheets issued for collectors that are worth more. Specimen $5 notes were also issued and can be identified by the printing of “specimen” on the note and are highly valuable.

Some paper five dollar notes will have an asterisk at the end of the serial number. That serial number will always begin with a Z. These are called star notes or star replacement notes and are very valuable in any condition. These notes replaced a soiled or damaged note in a bundle so bank tellers could still keep track of the number of notes in a bundle. This practice was discontinued in 1972.

As with error coins, error banknotes are very popular and keenly sought. Errors on the $5 paper note include missing print, ink transfer and registration shifts just to name a few, these are a topic for a whole other (and very long) article. Their value will depend on the type of error.

Now you have identified your five dollar note you can determine it’s approximate value. Pick up a coin and banknote catalogue and find your notes value -but take that value with a grain of salt. The banknote market is very flat at the moment (2014) so it’s wise to check on past sales to see what a similar note sold for.