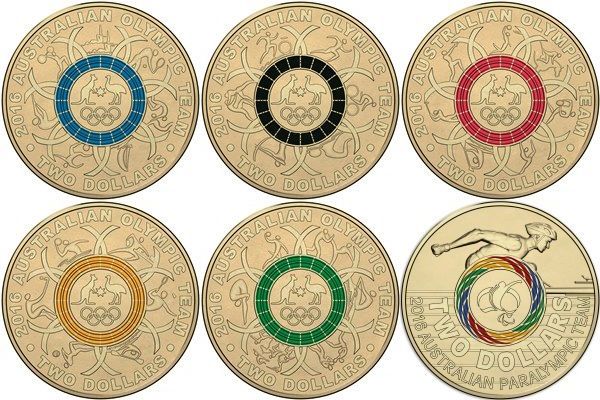 More coloured $2 coins are on their way with an announcement today that Woolworths in conjunction with the Royal Australian Mint will be the distributor of six coloured 2 dollar commemorative coins for the Rio Olympics. These will be available nationally through the tills from the supermarket chain from July 19th in the leadup to and throughout the 2016 Games. The Paralympic multi-coloured coin from August 22nd. They will also be available in collector packaging from the Mint and you local coin dealer.

Five coins feature the different colours of the Olympic coloured rings, blue, yellow, black, green and red. In the centre is a representation of the Olympic team logo which is the kangaroo facing right, the emu facing left and the Star of Federation and the Olympic rings surrounded by the coloured band. Outside that coloured band are stylised representations of 32 various sports different for each coin. The legends read 2016 AUSTRALIAN OLYMPIC TEAM TWO DOLLARS.

A sixth coin for the Paralympic Games that follow the Olympic Games in Rio will be the first 2 dollar coin produced by the Royal Australian Mint with multiple coloured circles, red, blue, green and yellow. The design depicts a representation of a person racing in a wheelchair with the Australian Paralympic Committee logo and the legends 2016 AUSTRALIAN PARALYMPIC TEAM TWO DOLLARS.

The first five coins were shown on Channel Sevens The Morning Show today, the 21st June, the announcement made by RAM coin programme ambassadors Patty Mills (basketball) and Kate Doughty (paratriathlete). A total of 12 million of these six new coloured coins are expected to be produced.