Is the Royal Australian Mint Releasing Old Coins into Circulation?

On various Facebook coin groups over the last 10 months or so once every couple of weeks I see someone post up a picture of a shiny 1984 (or sometimes 1985) dollar coin asking how it could possibly look so good. Perhaps a coin like this one:

Now my immediate answer to how a coin could look so good after so long is simple. Someone, back in 1984 when Australia was excited about the newly released coin kept one (or even more than one) of the shiny coins aside thinking it was interesting and might be worth something some day. That same coin has spent more than thirty five years in a money box, a plastic bag, or even in a drawer, before being found and spent. Less likely is that someone has broken open a roll of dollar coins (like the one below) and spent those. Now why do I think this is likely? Because in years as collectors and coin dealers we have seen hundreds, nay thousands of shiny uncirculated 1984 dollar coins shown to us by the people who put them aside back in 1984. Also, we’ve handled (and broken open) many, many, many, 1984 and 1985 dollar coin rolls, sold a few coins from those rolls but mostly spent them. 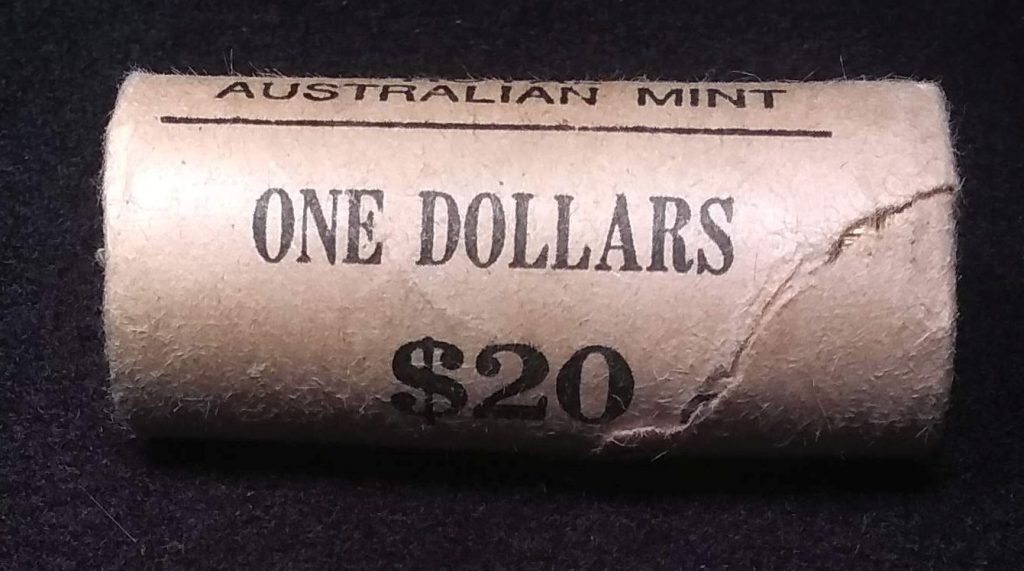 That, I thought was the end of the ‘why is the 1984 dollar coin so shiny’ question. However, it wasn’t. Before my eyes over a few months a theory sprang up on social media that the Royal Australian Mint was releasing old stock of 1984 dollar coins into circulation. As the months progressed the theory became more elaborate to encompass 1985 dollar coins, 1986 Year of Peace dollars, early 1980’s 20c coins, and even old stock of 10 cent coins. Not only did it become more elaborate it became more detailed with Facebook posts suggesting it happened in “October 2018” or “late 2018”. To my incredulous eyes the ‘theory’ stopped being a theory and had become ‘fact’ and was being peddled by numerous posters n Facebook. Don’t believe me? Here’s the proof: 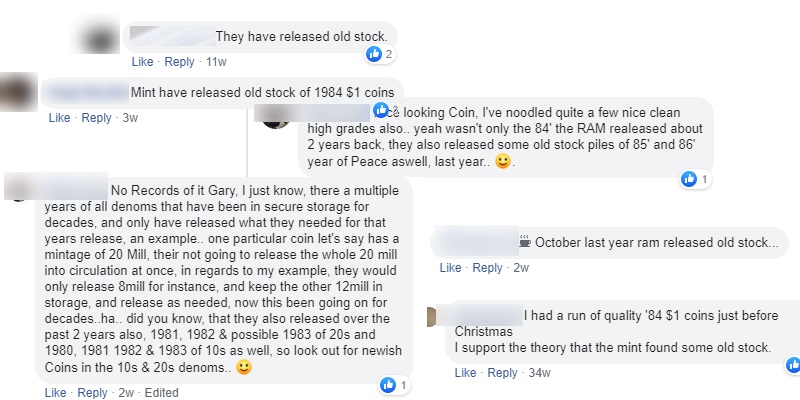 In the image above I draw your attention to the post at the bottom left, the person in question is asked if there are records of the Mint releasing old stock. His answer? “No records of it Gary. I just know.” Proof? He doesn’t need any damn proof. While it must be nice to be so certain of things without any actual proof I am not nearly so confident of myself. So I thought, let’s email the Royal Australian Mint and ask them. Here’s what I asked:

I wonder if you can confirm or deny that you released old stock of 1984 and 1985 $1 coins into circulation in the last year or two? There’s a lot of people telling us that this is the case and we just wanted to confirm.

Two weeks later the customer service team at the Mint got back to me with the following:

Thank you for contacting the Royal Australian Mint.

Apologies for the delayed response, I have liaised with the appropriate departments to ensure the correct information is provided to you.

The below is not in fact correct.

“The below” is referring to my quoted email. In just seven words the RAM have provided a definitive answer to the question, is the Royal Australian Mint releasing old stock of 1984 dollar coins into circulation?