Saturday the 13th February 2016 the Canberra Mint held an open day to celebrate 50 years of decimal currency. Our friends at Drake Sterling Numismatics attended the celebrations and were kind enough to write us a report on the event.

It was on a sunny Saturday that we made the trek down to the nation’s capital to celebrate the 50th anniversary of decimal currency at our national mint. The drive was a long one, and we arrived an hour late after we missed the turnoff. However, after wending about the new Parliament House and passing the Prime Minister’s gated digs, we finally arrived. And what a sight we saw. 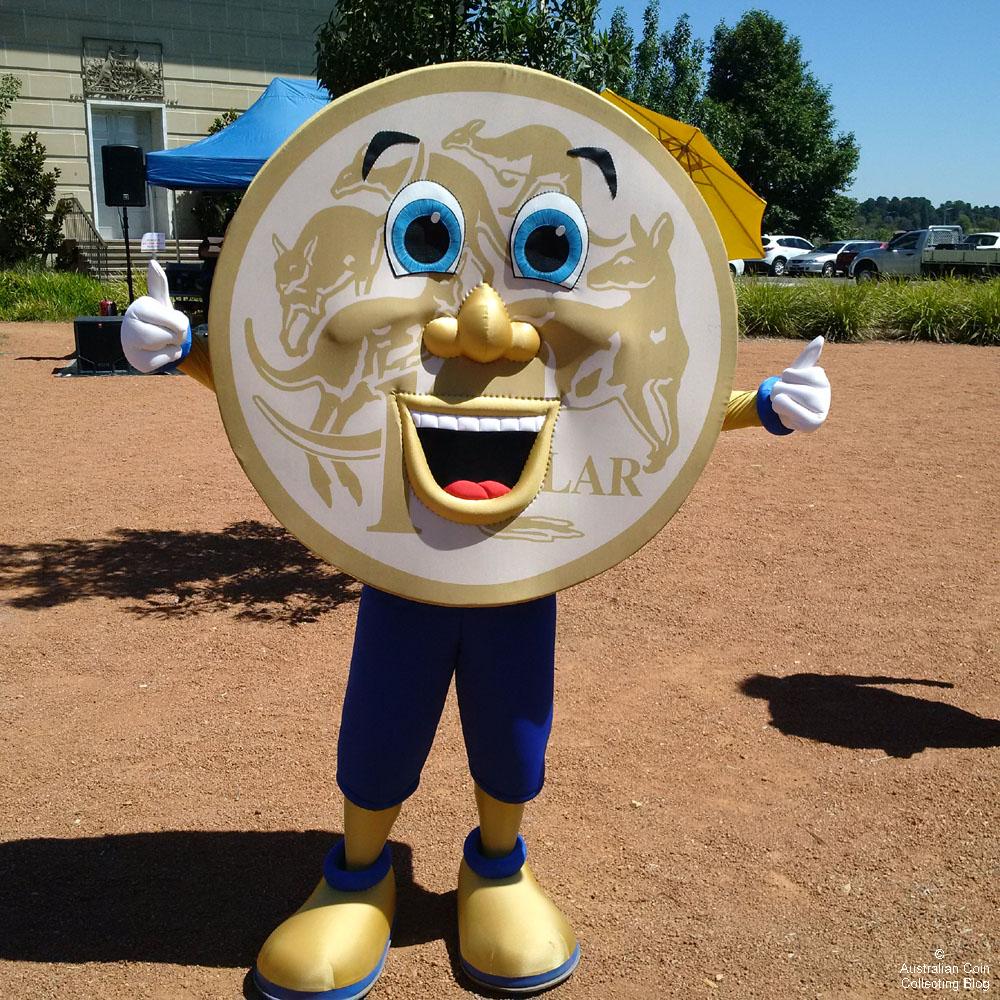 There were balloons, a jumping castle, streamers and flags, coloured tents, mint staff dressed as coins, a sausage sizzle and a fairy floss machine, a rock band, a mini-coin show, and face painting. And there were so many people. It felt like the entire collecting fraternity and their kids had turned up in Canberra for the day.

The biggest attraction of the day, of course, was the special open day fifty cent issue. Although the coin itself was identical to the standard issue gold-plated round fifty cent, it came in specially branded packaging—and if you were lucky, you could have it signed by the current mint master Ross MacDiarmid. I was after a handful to have graded by PCGS, but the queue to buy them was so long and winding that it took five or six minutes to find the end of the line. A collector friend who had arrived earlier said that the line was a hundred metres long at eight AM in the morning, and that keen collectors had joined the line as early as five AM. Fortunately, there was a shorter queue for cash purchases, and after I collected my coins and handed over the cash, we went inside to join the factory floor tour.

It was the first time that I’d been on the factory floor. There was much to see, including the actual striking of circulation coins by the presses. Dotted about the factory floor were large, garbage bin-sized cans—each literally filled to the brim with gleaming, mint state coins. All bore the new 2016 50th anniversary obverse. The following room had a display of blanks at various stages of production. Beneath a glass display, staff had set out a row of blanks and planchets of each of our current coinage. There was also a display of blanks and planchets from our non-circulating legal tender. A pickled silver planchet was also on display: The pickled planchet looked like a white, plaster disk. Next up was a small room of staff putting together mint and proof sets. One or two women were assembling the boxes, while another small team were snapping coins into capsules. The last room was the proof coin room, where proof coins were hand-struck by white-coated staff. After striking, staff assessed the proof coin with a magnifying glass for faults or other issues. Even dust particles would be cause for the coin to be rejected. And indeed, many coins were rejected: There was a pile of discarded proof coins on each staff member’s desk. A nearby tour guide mentioned that usually there were only very few rejects, and that the high rejection rate that day was due to the number of tourists on the floor disturbing the minting process. 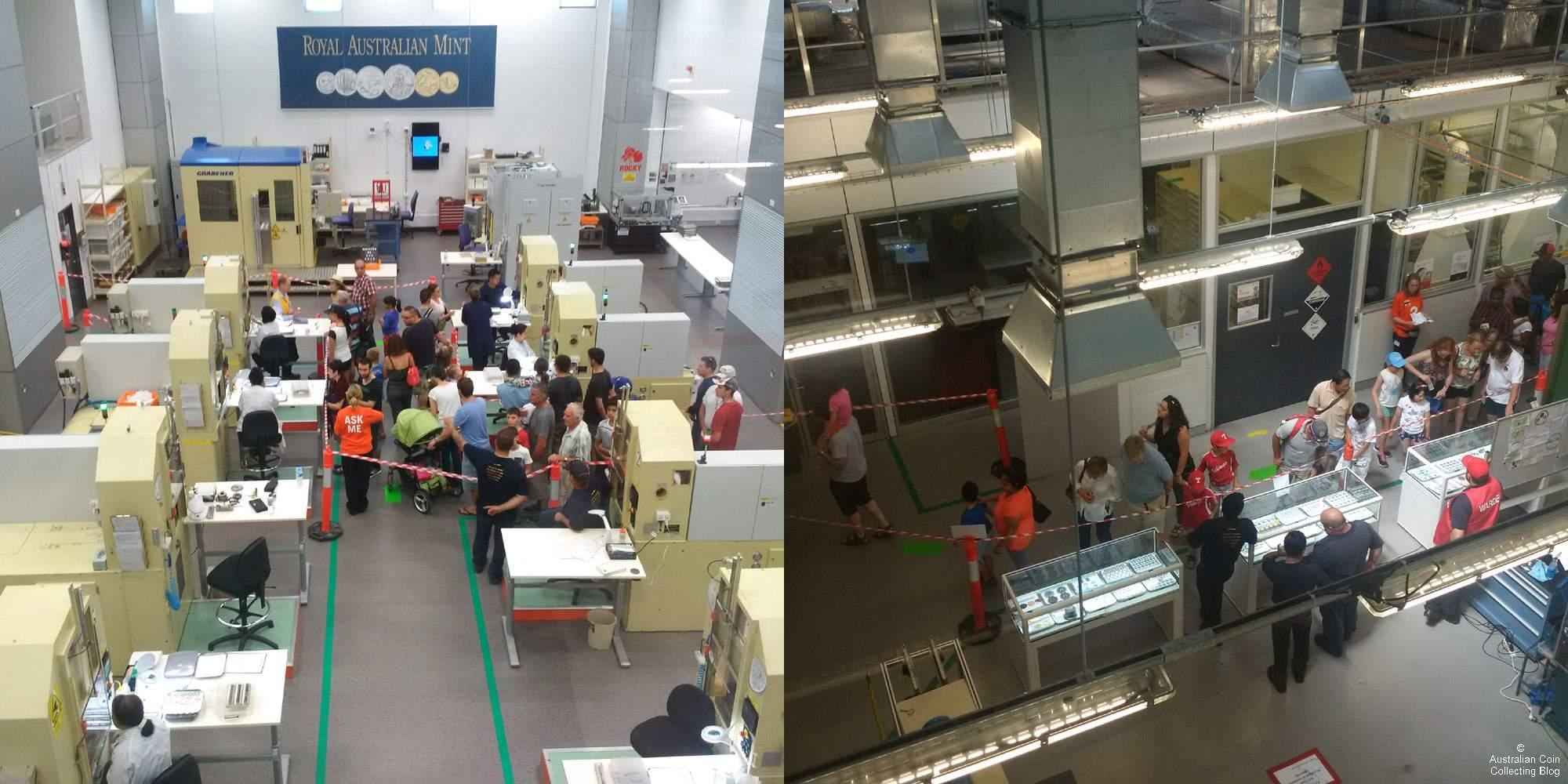 While most collectors were interested in buying new mint product from the mint shop, I was interested in visiting the National Coin Collection, which was on display in a glassed chamber above the factory floor. I had been looking forward to this all day, as I had heard rumours that the collection contained some of Australia’s greatest rarities. I was not disappointed.

Holey Dollars and Their Inner Dumps 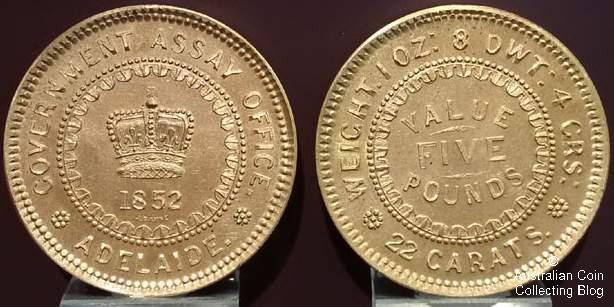 The first display contained a series of proclamation coins, while the second and third cabinets displayed a few pattern tokens from Australia’s early days. In the next cabinet were our first natively-struck coins, two examples of the Holey Dollar and Dump each (one displaying the obverse and one, the reverse). The four coins looked to be in good nick, and were likely worth a combined $200,000. Next came up our first gold coins, the Adelaide One and Five Pound pieces. There were two examples of each denomination. All four pieces were uniface restrikes. Above them were electrotypes of two Adelaide ingots. Next up was the sovereign display, which was curiously entitled “Australian gold coins 1870 – 1931”. (Sovereigns were minted from 1855.) Presented was one of each of the different sovereign types, as well as an example from each sovereign mint: Sydney, Melbourne, and Perth. The 1856 Sydney Mint sovereign on display looked UNC, and would be worth over $100,000 if the reverse was just as good; however, the example of the Type II sovereign, dated 1857, had a nasty scrape across Victoria’s face, which would have body-bagged it with PCGS. The last display of currency-issue coinage contained our Commonwealth coins—the pounds, shillings, and pence. A complete obverse type set was on display, including examples from 1950 and 1955 detailing changes to the obverse legends. (“Emperor of India” was dropped from the obverse in 1949 and “Defender of the Faith” was restored in 1955.) Last of the Commonwealth coin display, and perhaps most impressive, were two 1937 patterns: A 1937 penny and 1937 shilling. These are both great Australian rarities worth in excess of $50,000 each.

The cabinet that followed contained an expansive display of early decimal patterns, off-metal strikes, and trial pieces. All would be worth tens of thousands each in the open market—and all were probably unique. There were obverse patterns struck in London, featuring various renditions of Arnold Machin’s Queen Elizabeth. There were 1959 Melbourne pennies struck in various alloys of silver, shillings and sixpences struck in copper-nickel, and smaller coins struck in various copper alloys. A display of trial pieces followed, including heptagonal, scalloped, and other unusually-shaped pieces. A milled two cent piece was interesting, as was a round ten cent piece with a heptagonal inner border (similar to the new Fijian fifty cent pieces).

No coin museum would be complete without a counterfeit coin display featuring various examples of contemporary counterfeits, as we as the obligatory warning that counterfeiting was illegal. Here, there was a counterfeit cast 1813 dump on display, as well as its moulds. Below it was a counterfeit cast 1852 Type II pound. The next display contained two dies, an 1887 five pound obverse die, as well as a 1937 pattern penny reverse die. I later learned that both dies were manufactured by David Gee, although this was not mentioned in the captions to the display. 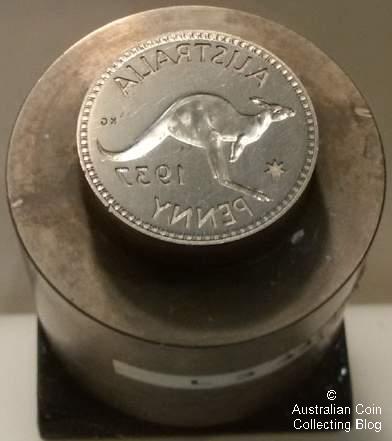 Last but not least was the “Scarce Coins” display, which contained coins held specifically for their numismatic significance (rather than their historical significance). Up first was, of course, the 1930 penny, followed by a pair of 1945 proof pennies—one from Perth and one from Melbourne. The gold display contained an 1880-S inverted “A” sovereign, an 1860/61 overdate sovereign, an 1858 Sydney Mint double “R” half sovereign, and a 1920-S sovereign. The display must have been set up a long time ago, as it noted that the 1920-S sovereign was worth “more than $300,000”. (The 1920-S is worth closer to a million dollars today.)

Last stop on our visit was, of course, the “Mint Your Own” coin press, where visitors could strike their very own legal tender. This press is not the same as the mobile presses available at off-site venues such as Sydney’s Royal Easter Show, and Brisbane’s Ekka. Those presses stamp a small counterstamp mark on a coin that has already been struck, while the Mint Your Own press in Canberra strikes a complete coin from a blank planchet. With the push of a green button, we minted two coins, each in gleaming, yellow aluminium bronze. One has already been sent off to PCGS for grading, while we’re keeping the other as a memento. (As an aside, the Mint Your Own mintmarked dollars apparently have different positioning of the interrupted milling than the mintmarked dollars in the four coin pack. Perhaps an eagle-eyed modern coin collector can tell us more.)

On the whole, it was a fun-filled day for everyone. Between the coin exhibits, jumping castle, and cheap food, it was certainly worth the drive down from Sydney. I’m not sure if they’ll plan something like this again next year, but if they do, I’ll be there.