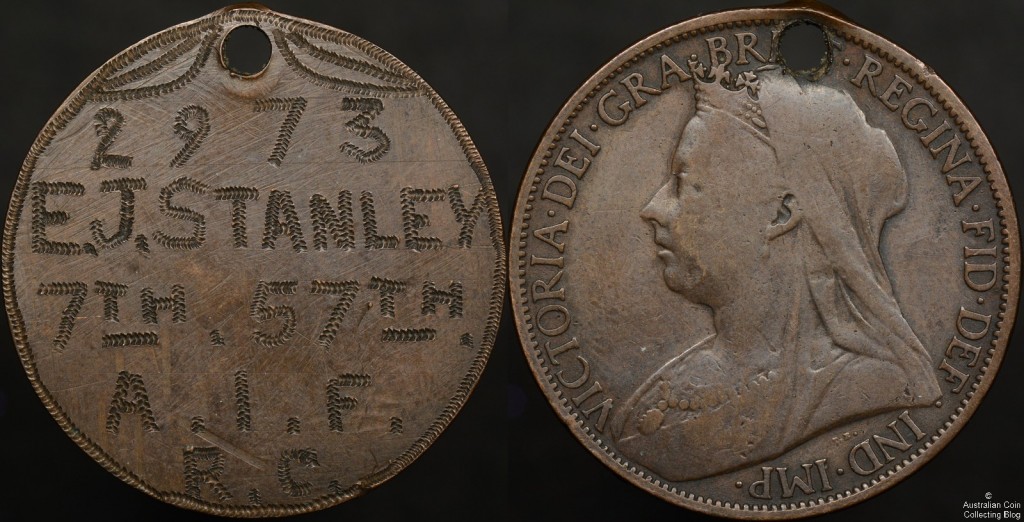 Above is crude World War 1 identity disk made from an old head (1895 to 1901) Queen Victoria Penny. It was purchased from a seller in the United Kingdom in late 2016. The disk is holed for suspension and the reverse has been skimmed and engraved using the ‘wiggle work’ technique. The disc reverse reads:

Edmund John (or Joe) Stanley (service number 2973) was born circa 1894 in either Victoria or New South Wales. He enlisted in the AIF in 1916 and shipped to France on the HMAT Africa. His trip was an eventful one and he was charged with offenses no less than four times, his crimes included “using insolent language”, “destroying government property”, “insolence to an NCA”, and “being absent from duty”. When he arrived in France the man was taken on strength of the 7th Reinforcements of the 57th Battalion. During his time in France he went AWL (Absent without Leave) several times and was subject to courts martial at least twice because of it. He received a 9 month prison sentence that was commuted after just four months. At the end of the war he went AWL again for two months before being found and imprisoned again. Stanley was finally shipped back to Australia in 1919 and true to character when the ship made landfall in Adelaide he went AWL again. According to his service records he was not pursued and was discharged from service.

His service records indicate that Stanley’s medals were not issued “on account of this man’s unsatisfactory service in the A.I.F.”. His record includes letters from him to the authorities asking for his medals on 5 separate occasions and being denied each time. He also asks for his certificate of discharge several times as he either has lost his copy or, on two occasions, lost them in a fire. In his letters his middle name sometimes is Joe and others times John and his date of birth varies from 1885 to 1894. Searching newspapers of the period indicates he was most likely an abusive alcoholic with reports of his crimes of theft, being publicly drunk, and beating his wife in public. All of these reports are in and around the NSW Riverina and around Echuca in Victoria. The newspaper articles also show a variation in his date of birth and middle name.

One can only imagine that his middle name, place of birth, and age were not certain to him perhaps due to his alcoholism or other illness or due to a poor up-bringing. A hint of his troubled up-bringing is found in an article on Trove from the Bendigo Advertiser in 1911. It refers to a “youth named Edmund Stanley” who was charged with stealing a watch in Moama (next to Echuca in Victoria). The very last record we can find of Stanley is his death record from 1962 noting that he his grave can be found in Echuca. We are unable to find record of any children and it appears that his wife pre-deceased him by some years. This ID disk is a sad memento of what was clearly a troubled man.