World War 1 Forget Me Not Token – To Kitty from Fred 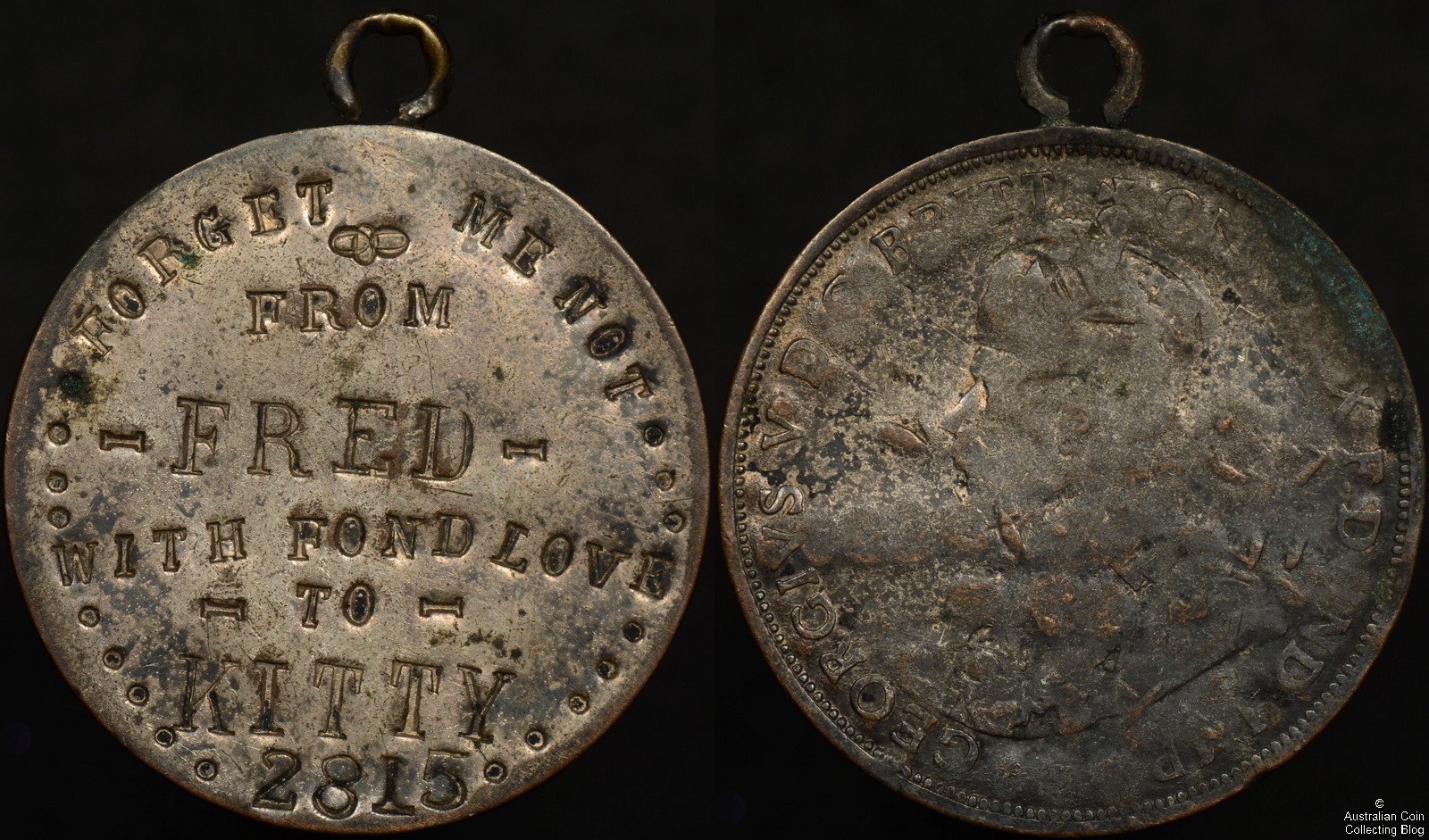 Forget Me Not Penny – From Fred to Kitty

Above you can see a crudely made Love Token of a type that seem to have mostly originated from Adelaide in South Australia during World War 1. We have written about this peculiar type of World War 1 Forget-Me-Not pennies previously. This example is a silvered George V Australian penny with attached loop with the reverse skimmed off and a message stamped into it. The reverse of this Love Token reads:

FORGET ME NOT
FROM
FRED
WITH FOND LOVE
TO
KITTY
2815

This token was crudely manufactured for a new recruit, probably in a military camp around the Adelaide metropolitan area and was then given to a loved one before the soldier shipped out to the Middle East or Europe. Some of the forget-me-not pennies we’ve seen are not attributable to an individual but in the case of this one we can certainly do so as the number of the bottom line, 2815 is (presumably) Fred’s regimental number. As each Australian unit in WW1 kept it’s own regimental number series it was common for two different men to have the same number allocated to them as they would be serving in different units. This makes identifying our Fred a little more tricky but quite possible using the National Archives of Australia website. We simply did a basic search for “2815 frederick” in the date range 1914 to 1918. This returned three possibilities for our man.

Given that Peter Lane[1], expert on these forget-me-not pennies is sure they originated in South Australia we looked through the digital records of Fred Turner and Fred Gifford first.

Fred Turner[3], a motor mechanic, enlisted in July 1915 at the age of 25. Once his training was completed in Australia he shipped out to France to be taken onto the strength of the 10th Battalion. His service record is typical of the period showing time spent in hospital sick and time spent in various training schools including gas school, brigade engineers school, and GHQ school. As is typical for a lot of Australians during WW1 his record also shows instances of going AWL for short periods and the penalties that inevitably resulted from such misdemeanors. Fred Turner’s time as a combat solider ended on 18 August 1918 when it appears he negligently (or deliberately) injured himself, shooting himself in the wrist. He spent the remainder of the war in England and was not returned to Australia until late 1919, having to suffer through the legalities of his self-inflicted wound while still overseas.

Frederick George Gifford[2], Service Number 2815 was born in Exeter, South Australia in 1889 and enlisted in 1916. He listed his occupation as a Mechanical Engineer. His initial service was in France as a motorcyclist with the Australian Mechanical Transport Service. In early 1918 he attended a course as an artificer at the Tanks Corps Depot and in May shipped back to Australia. Part of the record of Gifford’s service during World War 1 includes a letter to The Officer Commanding, Base Records, Melbourne -the author of the letter Miss Kitty C. Pantzer. You can see the letter below: 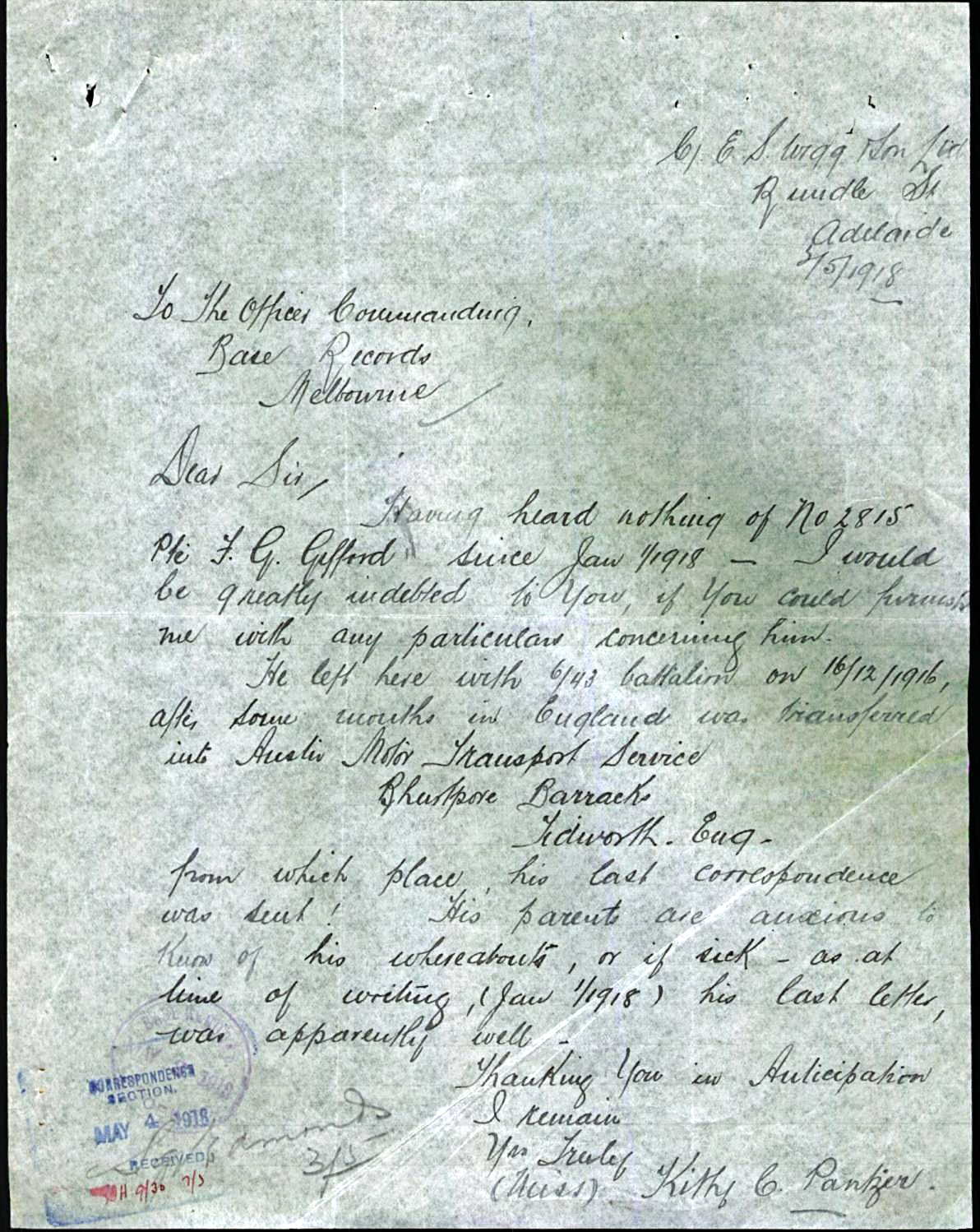 Clearly our forget me not penny belonged (at some point) to Frederick George Gifford and Miss Kitty (Catherine) C. Pantzer. It’s wonderful to be able to establish the true identity of the individuals behind an object like this. Further investigation shows that Gifford holds a special place in Australian military history as a member of the very first crew of Australia’s very first tank. Let’s look more at this journey. 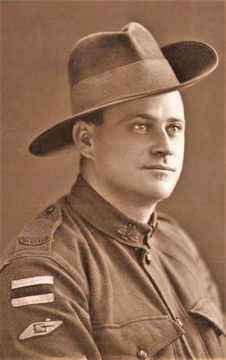 In August 1918 he was discharged from the AIF and immediately re-enlisted for service in Australia only. Upon re-enlistment he was taken on as part of the Australian Armoured Service Corps[4]. He spent the rest of the war as part of the crew of Grit, a British MK IV tank numbered 4643. The tank toured Australia for several months in 1918 for promotional purposes including spending several days in Adelaide after the tank was shipped there with some difficulty by rail from Melbourne. While the tank was in Adelaide tin badges showing the tank were sold and a naming competition was held for the tank. It was at this point that it received it’s name ‘Grit’. During the return train trip to Melbourne the interior of the tank was broken into and equipment worth several hundred pounds was stolen. The tank was used for demonstration purposes for the rest of the war and the period afterwards to help repay war loans. Eventually the tank found it’s way to the Australia War Memorial where it can still be seen. 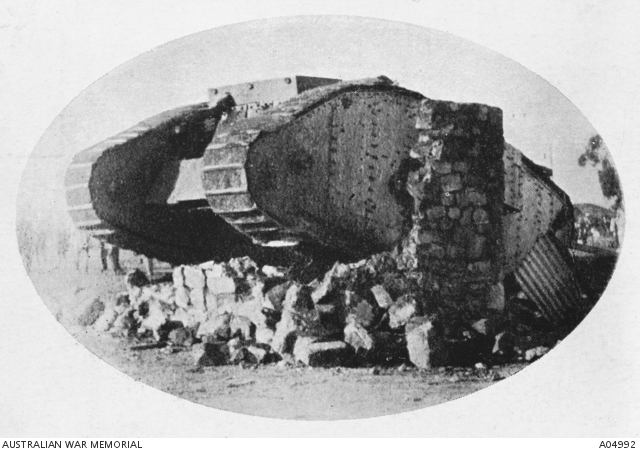 Fred Gifford left military service in 1919 and married Ellen Maloney in Mount Gambier in 1922. Fred lived out most of his life in Mount Gambier where he was a publican and a strong supporter of local sporting teams. He moved to Melbourne in the 1950’s and died in 1961. Of Kitty Pantzer we know little and further research is required. What the relationship between Fred and Kitty was exactly is unclear, but at some point they thought enough of each other that this sweet token of the bond between the two was made. It is an important reminder of a time where such keep-sakes were hand made and unique, and a look back at a man who holds an interesting place in our military history. 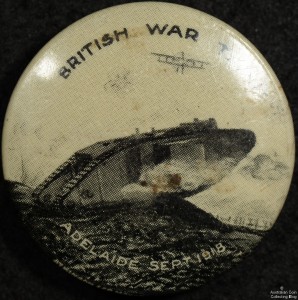