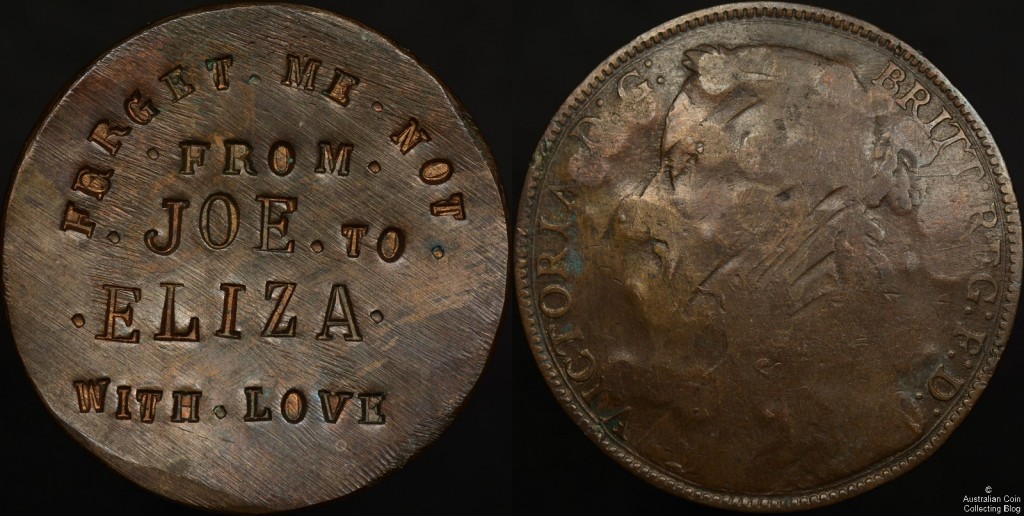 Last week we were showing the above item to our parents who had no idea as to it’s origins. Our 9 year old daughter asked to take a look at it, examined it briefly, and announced with certainty in her high pitched voice,

And of course she’s quite correct, it is a Love Token. But a special type of Love Token peculiar to South Australia and dating from World War 1. But before we get into that let’s see what Robyn Einhorn of the Smithsonian calls a Love Token:

Love tokens are coins that were engraved after the minting process was complete. Generally, an artisan removed the words and images from the reverse, or sometimes from both the obverse and the reverse of a coin. Artisans ranging in skills from a high-quality craftsperson to a “do-it-yourselfer” then engraved or punched pictures, initials, and messages on the cleared area.

If we examine the token above and compare it with Einhorn’s definition does it qualify as a Love Token, as so confidently proclaimed by our 9 year old daughter?

Even though we should have just trusted the wise words of our daughter, this extra confirmation helps us to say with certainty, that this is indeed a Love Token. However, to anyone with any experience of such things it’s quite a bit different to those typically seen. In Australia, at least, most Love Tokens seen are elaborately engraved silver coins from Great Britain or the USA and dating from the mid to late 19th Century. Why nothing from the 20th Century? According to the US based, “Love Token Society” Love Tokens had fallen out of fashion by the 1890’s because the discovery of large silver deposits around the world resulted in a glut of cheap silver jewellery being available. It had become easier to give a wife, or fiance, or sweetheart a piece of jewelelry than to have a coin smooth and engraved with a personalised message. Probably not the first, and certainly not the last time that mass production has resulted in the loss of some romance in the world.

But we digress. Our token is definitely not silver, and while the coin dates from the late 1800’s could it, in fact, be from a later period than this? At the time we purchased it from a local coin dealer in Adelaide, South Australia, we weren’t sure and the true origins of the coin were unknown to us. However, a few months later in the very same shop we purchased this: 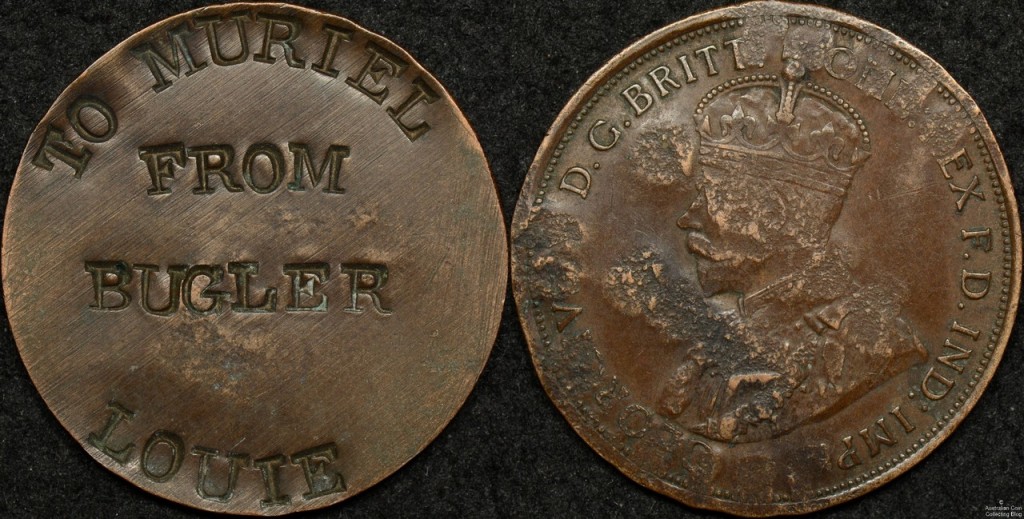 Another Love Token. With a similar crudely filed and smoothed reverse and a heartfelt message punched out roughly saying “TO MURIEL FROM BUGLER LOUIE”. This token has been made from an Australian George V penny, which dates it from 1911 onwards. Clearly this new token, by it’s very method of manufacture and the fact that they were both acquired locally by us is somehow related to the above token which Joe had made for Eliza when he was departing to some unknown lands. Which lands were Joe and Louie heading for? And why did they have these tokens made for their sweethearts? The answer, is of course, they were heading off to war. World War 1 in particular, and they were bound for the battlefields of Europe or those in and around the Mediterranean Sea, Palestine, Syria, or even perhaps, Gallipoli.

How do we know? The answer was in our very own local numismatic society where fellow member and well known South Australian numismatist Peter Lane had written an excellent article in 2014 for the Journal of the Numismatic Association of Australia. Entitled “South Australian WWI soldiers ‘forget-me-not’ Pennies” (View PDF Online) it discusses:

….a uniquely South Australian form of love token made during the First World War. The tokens were made outside army camps from pennies in circulation and were given by recently enlisted soldiers to their mothers or loved ones shortly before embarking from Adelaide

Peter says these humble mementos were given out by soldiers prior to departure to the other side of the world to fight in the Great War. They were probably made in workshops outside of various barracks situated around Adelaide and being made from base metal pennies were affordable for a humble private in the Australian Imperial Force who was paid just 5 shillings a day. His article discusses 12 of these WW1 forget-me-not pennies in his possession, and in this article we are happy to show you two more. Even more interestingly we suspect that our “FROM JOE TO ELIZA” forget-me-not was made in the very same workshop as one of the tokens in Peter’s article. Item 7 in the article, “FORGET ME NOT FROM LLEW TO MOTHER 2 DECEMBER 1915” shows a peculiar oval impression around the upstroke of the T in FORGET. Our “JOE TO ELIZA” specimen shows exactly the same characteristic. We look forward to the opportunity to examine Mr. Lane’s specimen to confirm this relationship.

There you have it, two uniquely South Australian World War 1 Love Tokens manufactured locally and given by departing soldiers to a loved one. Small crudely made items that still contain an amount of romance and regret for months and years spent apart that far outweigh their humble origins. So much so, that even a 9 year old almost exactly 100 years later can recognise them for what they are, tokens of love from a time that is lost to us.