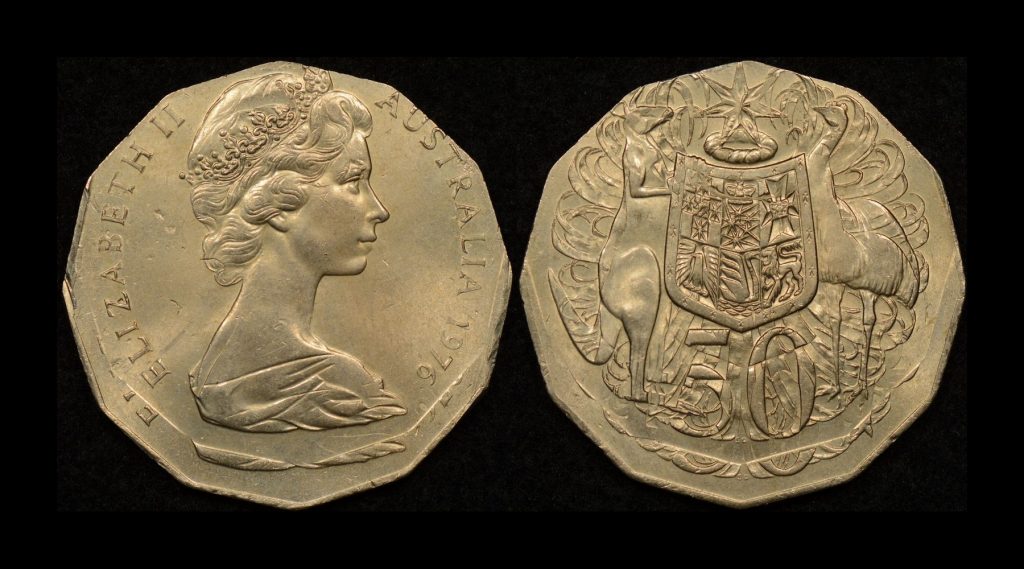 Your eyes are not playing tricks on you here, you are indeed seeing double when looking at this 1976 fifty cent coin. Life for this 50c started out just like most others, being struck as normal between an obverse (heads), reverse (tails), and collar die. Events after that point went awry! The coin failed to eject from the press, managing to move a mere 3mm before being struck for a second time. This out-of-collar 2nd strike overstruck and largely obliterated the majority of the first strike.

The first obverse strike is almost invisible under the second strike with just traces apparent around the date and legends and the back of Her Majesty’s portrait. On the reverse it’s much easier to see remnants of the underlying strike. Look at the disjointed appearance of the “50” and the clear remains of the bottom of the central shield. Closer examination of other parts of the reverse design make it apparent that there is a lot of flattening in the design from the second strike due to the placement of metal from the first strike.

Eagle-eyed readers may see that there is also a small strike-through (likely cotton or wire) at the base of Her Majesty’s hair. This coin is a fine example of a double struck Australian fifty cent coin and the authors would like to thank it’s owner for allowing the use the coin’s image in this article.