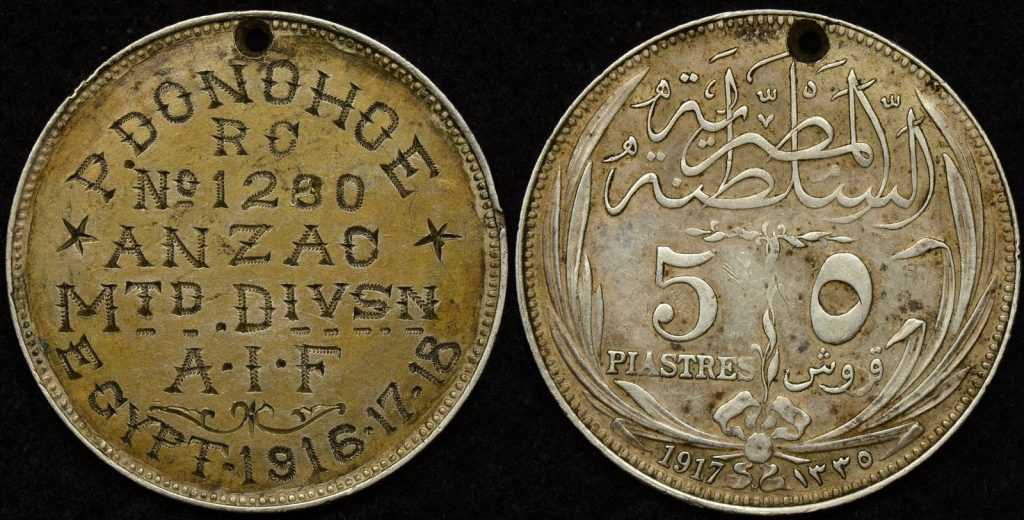 Seen above is an unofficial World War 1 AIF ID disc made from Egyptian 1917 (AH 1334) 5 piastres (KM#318.1). Obverse has been neatly skimmed inside the radius of the rim beads. The following inscription has been applied with skillful ‘wiggle-work’:

The disk spells the soldier’s name as “DONOHOE” while a search of as Australian military records shows Patrick Donohue served with regimental number 1280. Donohue, a native of Galway in Ireland living in Randwick, Sydney was 41 years old when he enlisted into the AIF on September 24, 1915 at Holdsworthy, NSW. Patrick was taken onto the strength of No. 5 Squadron, 2nd Remount Unit and shipped out to the Middle East on HMAT Orsova on 10 November 1915.

His records show no information from his shipping date until 10 October 1916 when he marched to the military camp at Moascar in Egypt from the Australian Reserve Depot in Helipolis, also in Egypt. No futher activity is noted until 5 October 1918 when he is moved to canteens at Suez, where he stayed for a month before moving back to the camp at Moascar. In July 1919 he marched to Port Said before shipping back to Australia on HMAT Delta, arriving in Melbourne in September 1919 and finally being discharged on 27 October 1919.

It’s worth spending some time looking at the spelling “DONOHOE” vs “DONOHUE” by examining the handwriting and signatures from the service records. There are two separate Enlistment Attestation Papers in the records that are clearly signed and filled in by different people. The “Application to Enlist in the AIF” form appears to be filled in by yet another person. Below you can see a comparison of the hand-writing and signatures. Clearly sometimes the name is spelled “Donohue” and others “Donohoe”. The ID disc shown here with “Donohoe” indicates the confusion continued during the man’s active service. Perhaps we can surmise from this and the different hand-writing that Patrick Donohue/Donohoe was largely illiterate.

One small clue as to the correct spelling can be found in an article from the Sydney Morning Herald dated 5 February 1948. The article mentions the Will of Dora Donahoe of Randwick in Sydney. The executor of that Will? Patrick Donohoe. And who does Patrick Donahoe/Donohue, service number 1280 list as his next of kin in 1915 on his enlistment forms? His sister, Dora Donahue of Randwick, Sydney. Conclusive proof that the correct spelling is Donohoe? No, not conclusive, but certainly compelling.