A Partial Engagement –the story of partial collar errors

This article was published in the Australasian Coin and Banknote Magazine, March 2017 issue and was written by the Australian Coin Collecting Blog.Subscribe here to CAB magazine.

What is a Partial Collar Error?
The Partial Collar Error is an interesting type of coin error that gets its name as the coin only partially engages with the collar die when it is struck giving the rim a stepped appearance around some or all of the circumference of the coin. 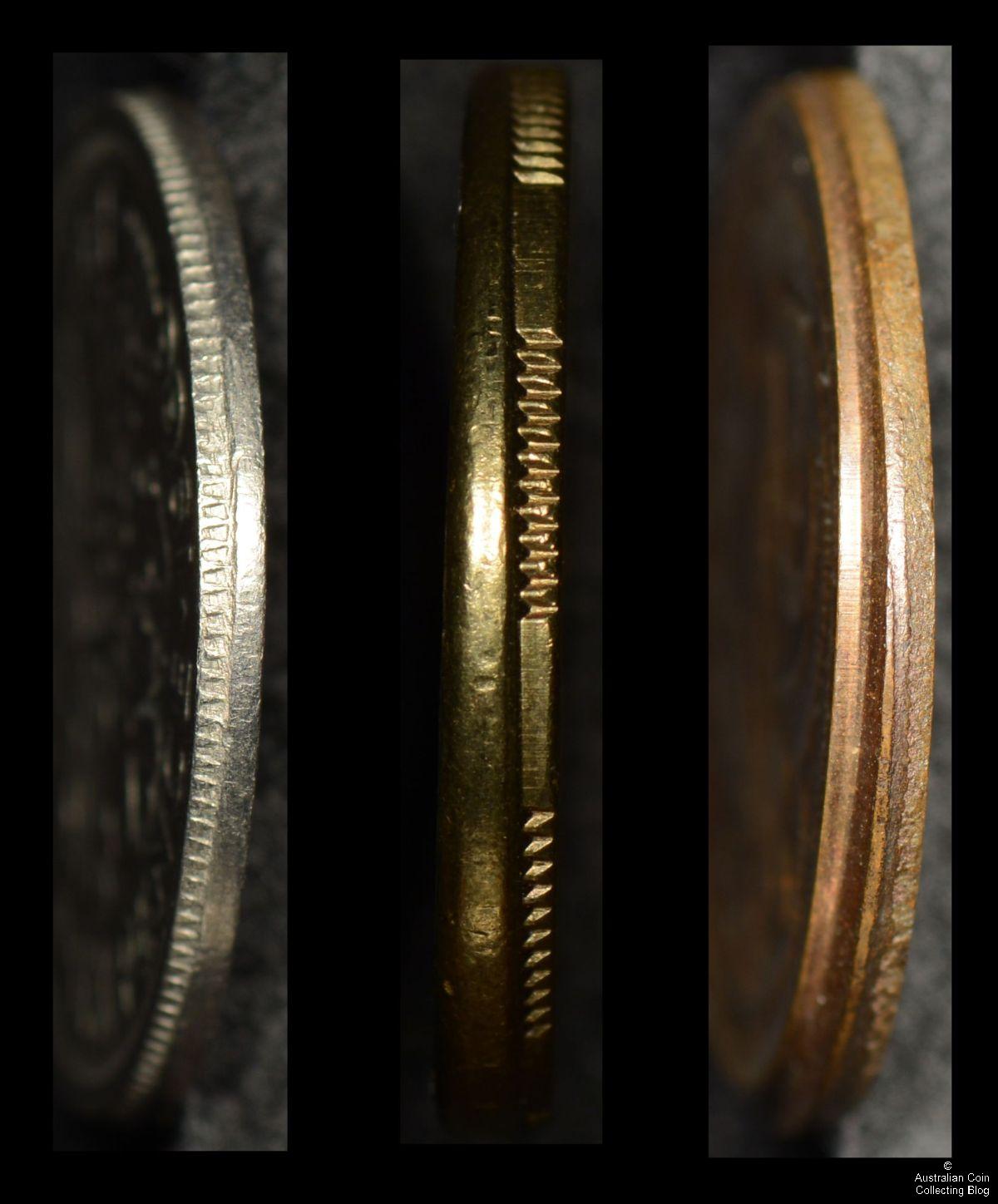 Partial collar errors don’t usually look too spectacular when viewing the obverse or reverse face of the coin. Typically it’s when taking a closer look at the edge that it becomes obvious where the problem has occurred. In the case of a straight partial collar error the side of the coin that correctly engages with the collar die should look for all intents and purposes, like a correctly struck coin. However, with the opposing side effectively struck out of collar the diameter should be greater than standard. It’s on this side of the coin that you may see metal flow and fishtailing due to unconstrained radial metal flow. See Figure 4.

Why Do Partial Collar Errors Occur?
There are two commonly accepted reasons for partial collar errors. The first has to do with the manufacture of the coin blanks themselves, the second a failure in the operation of the coin press machinery.

Improperly Manufactured Coin Blanks
What is one reason that a coin blank wouldn’t sit neatly in the collar for striking? The answer is quite obvious and is answered in Figure 5, a letter from the Royal Mint in London dated 1968. This letter is a response to Mr. C. McMillan who had mailed a straight partial collar 1966 sixpence error (Figure 1) to the Royal Mint asking for an explanation as to the origins of the coin. J.C. Hill, an employee of the Royal Mint, in reply to Mr. McMillan says:

“Your coin escaped this process and was therefore too large to fit properly into the collar which cuts the milled edge when the coin is struck.”

Machinery Failure
Herbert (2002) suggests a second reason for the partial collar error. Failure in some aspect of the coin press itself. He says:

“The collar may not rise and fall properly with the striking process, the support springs may break, or the collar may jam.”

It’s easy to see how in any of these cases that the collar die would only be raised partially around the rim of the coin even for a perfectly manufactured coin blank. In Mr. Herbert’s case of broken collar die support springs it is not inconceivable that just one spring could break resulting in a tilted collar die which could easily explain tilted partial collar errors.

How Common is this Type of Coin Error?
Partial collar errors are among the more common errors available to collectors. They are certainly the most common type of error coin that arise from planchet location problems during striking. Ramstrikes, broadstrikes and off-center strikes are other errors that result from planchet location issues but each is far scarcer than the partial collar.
Most of these more grossly deformed types of errors usually get picked up either by the Mint or by security companies when they are rejected at the coin rolling machines. Sometimes smaller less deformed partial collar errors find their way into circulation. Partial collar errors are more commonly found on the smaller denominations and they are easily overlooked and sometimes circulate for a while before being put aside by a collector. 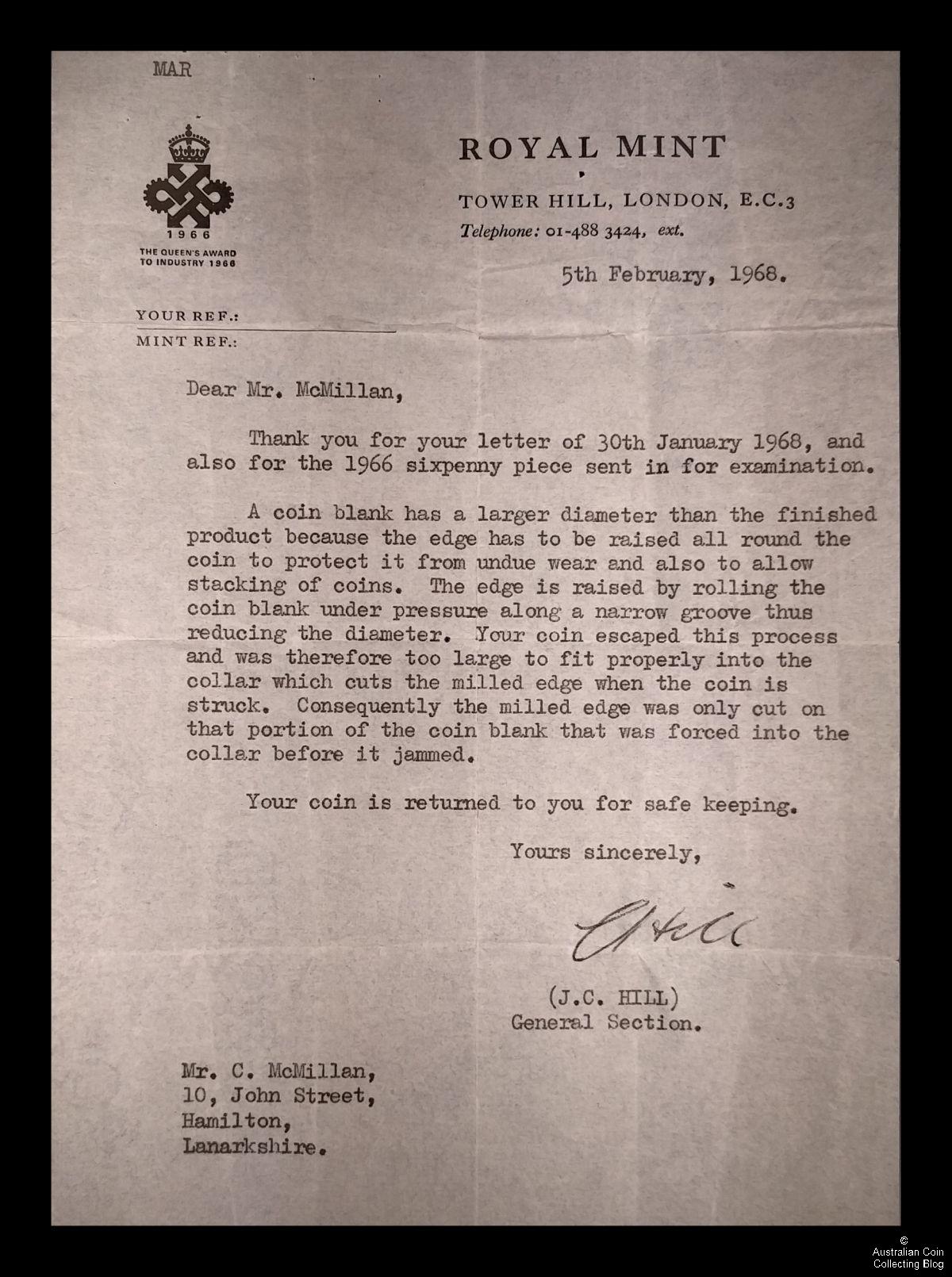 A Recent Find
An Australasian Coin and Banknote reader was over the moon when he recently opened a Royal Australian Mint roll of freshly minted 2016 50th Anniversary of Decimal Currency Changeover 20 cent coins and found a partial collar error staring back at him. Glaringly obvious as can be seen in the photos (Figure 6) part of this coin didn’t engage at all with the collar die and there is a significant area with no milling around the edge. Our reader was quick to don his white gloves and carefully photograph the coin before putting it away in a coin holder. This is the first 2016 partial collar error the authors have seen and having come directly from a mint roll is retained in desirable uncirculated condition.