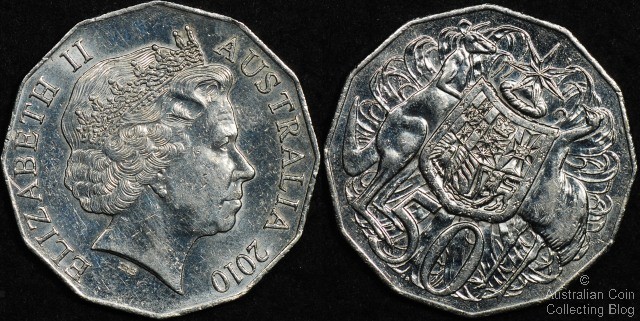 In 2012 a new Australian 50 cent coin variety was discovered by coin noodlers*. This variety is an Upset Coin Error which means that the obverse and reverse dies were not aligned correctly when the coins were struck. Normally Australian coins are minted in medallic alignment, which means that the obverse and reverse sides of the coins are the same way up. Determining the degree of upset of these types of errors can be difficult. However, in the case of the 2010 upset 50 cent coin the degree of upset is easily determined because of the unusual dodecagonal (12 sided) shape of the coin. Any upset Australian 50c must be some multiple of 30 degrees unlike the 2001 Centenary of Federation one dollar upset error which is found in pretty much every degree of rotation.

It’s clear from the image above that the 2010 upset 50c error is 30 degrees upset. 30 degrees is equivalent to one of the sides of the Australian 50c coin. One can only speculate as to the reasons for the manufacture of this error. We would imagine that the coining dies are keyed to prevent them being installed out of alignment, so perhaps in this case the die was not keyed and it was installed incorrectly. Alternatively perhaps it was keyed but when the production die was hubbed perhaps it was out of alignment then.

Whatever the cause of this error it’s an interesting one and the mintage is likely to be only one production die run or less. This could mean that just 200,000 or less of this variety exist. At the time of writing examples of this variety have been selling on eBay for $50-$100. There might be some good potential growth in the value of this variety, especially if you can find an uncirculated example (or examples) to put away for a few years.

*Coin noodlers are collectors who withdraw thousands of coins from their bank and look through them looking for known errors and varieties. They then take the searched coins back to another bank and then repeat the process. Sometimes, such as in this case, they discover new varieties.