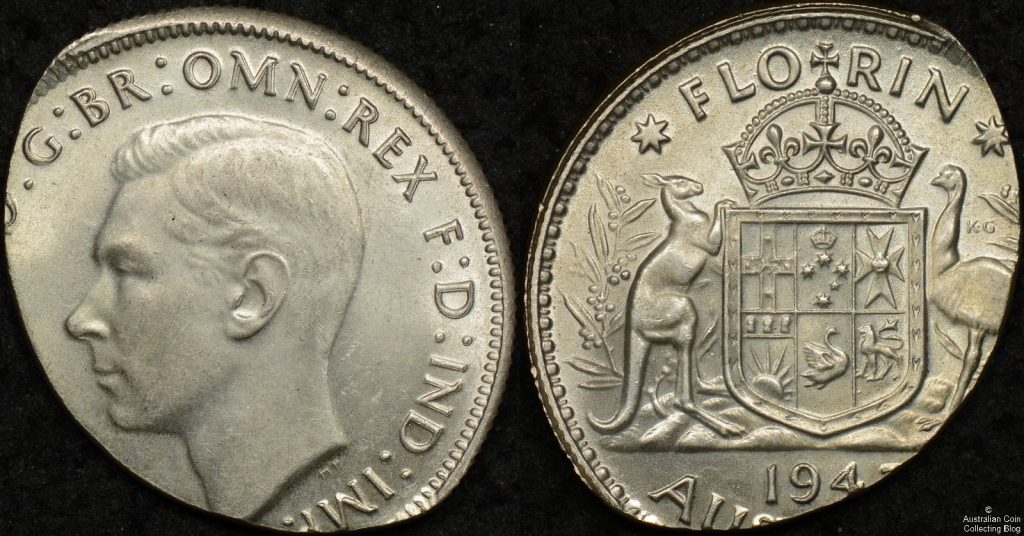 Above you can see a simply amazing error, an Australian 1947 Florin struck on an ellipse shaped planchet. The shape of the coin is the result of a coin blank that was struck twice by the blanking press, the smaller crescent shaped segment falling off leaving the distinctive elliptical shape. That blank is then struck and we have the error we see before us. We written extensively about how elliptical clipped errors occur previously.

If you take the time to read the article we’ve just linked to you’ll note that we call this error the ‘rarest’ of the clipped planchet errors. We stick by that claim, and suggest that an elliptically clipped florin is scarcer again, and one with such a nice grade as this 1947 example even scarcer! In fact, the authors can recall seeing less than 5 elliptical clipped florins, including this 1962 example we wrote about earlier this year. That 1962 elliptical clip florin is not so nearly as nice as the example we’re looking at here and this just highlights how it is a truly wonderful and hard to get error. One that if seen and not purchased is unlikely to be replaced by another example in a short time frame. This coin was obtained from a Noble Auction where it realised about $1000 including buyer’s premium.

There might be some reading this who look at this coin and wonder how we can tell that the coin blank was elliptical BEFORE the coin was struck rather than a normal coin being cut down AFTER it was struck. We covered that in some detail when we looked at the 1962 example but to summarise, look for two key indicators. The first, is fishtailing of the legends near the missing part of the coin, in this case it could not be more obvious than on the D of D.G. on the obverse of the coin. The second indicator is poorly struck rim beads/denticles and rims near the clipped region that transition into fully struck further away from the clip. This is very clear on the reverse of the coin above the N of FLORIN.

We’ll conclude the same way we did the last time we looked at a florin struck on an underweight elliptical planchet by saying that it’s always fun to be able to take a closer look at such an impressive error.