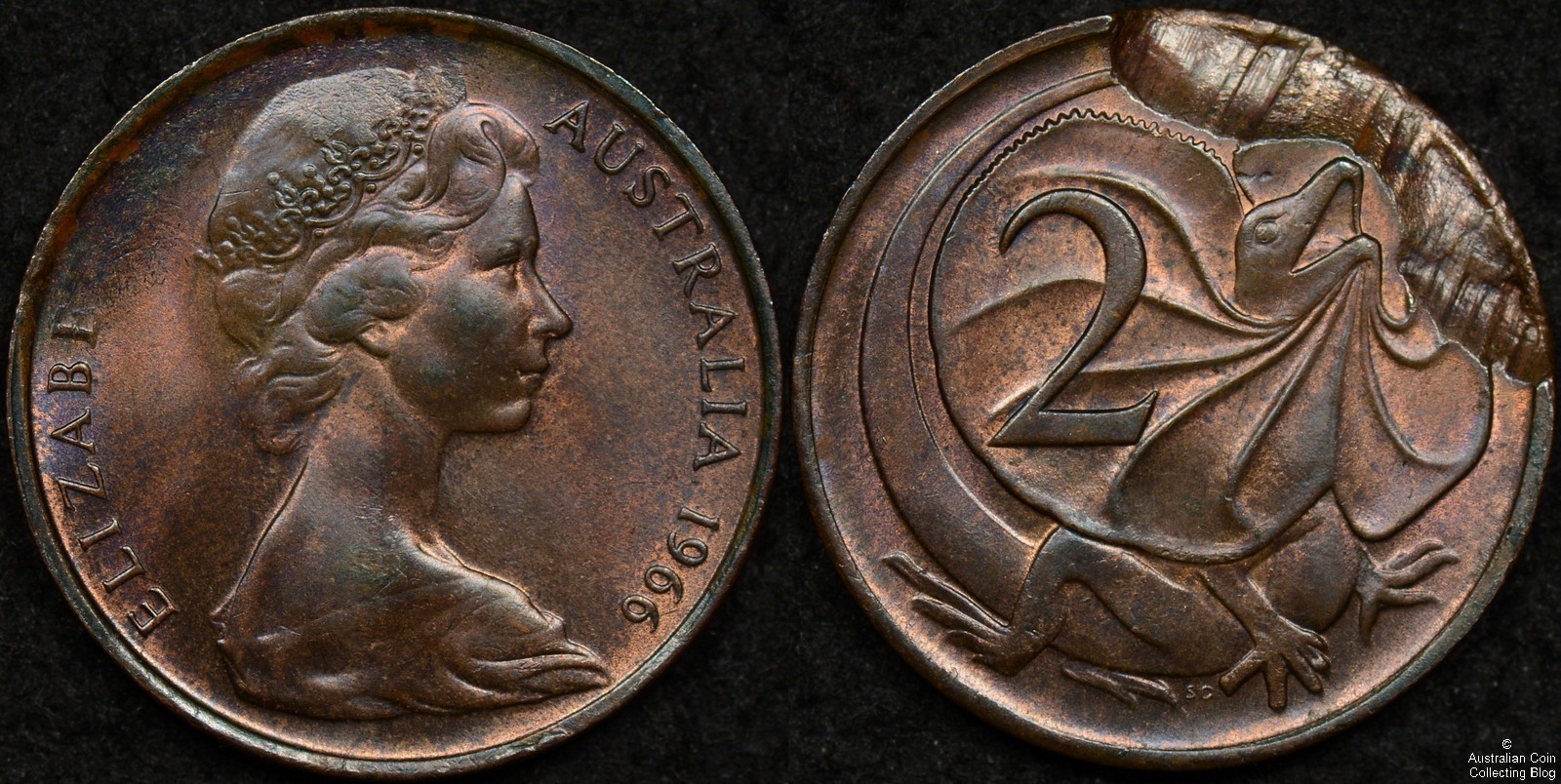 This 1966 2 cent struck on an incomplete planchet gives the collector some very interesting insights into the coin manufacturing process. Firstly though we’ll examine the error itself. The coin is a 1966 2 cent from an uncertain mint (see here for 1966 2 cent mint marks) that has been struck on an incomplete planchet. We know it is an incomplete planchet as it weighs just 4.80g which is about 7.5% less than the expected weight of 5.18g. Clearly the missing part of the coin is on the reverse between about 12 o’clock and 3 o’clock extending a few millimeters into the reverse and about 1mm into the surface of the coin itself. The coin is a glossy red brown as are the corrugated surfaces of the missing part of the coin. Readers with a keen eye will note an area of strike weakness on the obverse. The top of the portrait is smooth and missing a lot of detail and the TH II of the monarch’s name is completely missing.

Could this coin have perhaps been struck on a complete planchet that split into pieces after it was struck? Or perhaps this is a coin that was simply damaged after it was struck? Well, the weakness on the obverse is the key indicator that neither of those cases is true, and that the coin was actually was struck on an incomplete planchet. When the region of the coin opposite the missing area was struck there was a major factor in play that stopped that area being struck up properly. Namely that there was no resisting pressure from the reverse die when the obverse die struck as the planchet in that area of the reverse die was missing! Obviously this will lead to a localised area of low striking pressure and this is evidenced by the weak strike and missing design details on the obverse.

There’s another part of the coin manufacturing process we can learn about by examining the surfaces of the missing area of the coin. There are two things to note. First, there are clear parallel lines traversing surfaces. Secondly, the surfaces themselves, while textured, are still largely smooth and glossy. To understand what we’re seeing here we need to think back to method used to form coin blanks. Basically they are punched from a strip of metal by a machine called a blanking press. The strip of metal is formed by rolling metal between rollers that are progressively closer and closer together until strip of the desired thickness and width is achieved. Of course any piece of foreign metal on the surface of the strip is going to be flattened and pressed into the surface of the strip and elongated in the direction that the metal is rolled. The surfaces of the strip and foreign material are going to rub against each other polishing each surface and extrusion lines are going to form in the direction of rolling. Which, is of course, what we’re seeing here.

This 1966 2 cent struck on an incomplete planchet is a lovely grade, uncirculated and glossy brown. Nearly 10% underweight we have seen that it was struck with part of the planchet missing, and most likely the missing part is due to a metal inclusion that was rolled into the coin bronze prior to the manufacture of coin blanks. That inclusion fell out sometime between the bronze being rolled into a strip and the coin blank being struck. Initially not visually spectacular, this error is of great interest and has some lessons to teach any error collector.