Today’s error coin spotlight sees us looking at a spectacular broadstrike 1966 20 cent that was minted in Canberra for the release of decimal currency in 1966. How do we know it was minted in Canberra? The RAM somewhat sneakily included non-obvious mint marks in the design of the new decimal coins, which in the case of the 20 cent were minted in both Canberra and London. These mint marks didn’t become generally known until after the release of the new coins but we know quite well what the 1966 decimal mint marks are now. In the case of the 20 cent we need to look at the reverse of the coin on the right side of the duck-billed platypus head where the water swirl ends. 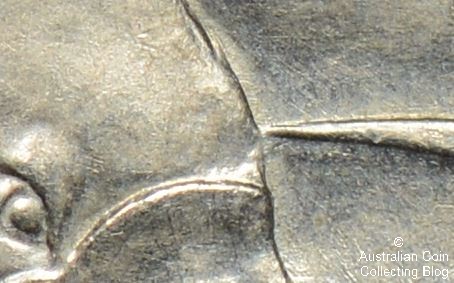 In this case the swirl clearly ends at the head with no gap indicating that this 20 cent was indeed minted at the Royal Australian Mint in Canberra. Now that we’ve determined the origin of the coin let’s look at the error.

The coin itself has been struck with no engagement with the collar die at all and while the coin blank was about 3mm or 10% off center. This has resulted in the design being (not surprisingly) 10% offset from where you’d expect it. Classifying the exact type of error is a matter of some debate among collectors. We can definitely say it’s been struck out of collar, in addition the planchet is a millimetre or two larger than a normal 20 cent, so it’s been “broadstruck”. The error is definitely a “broadstrike outside of the collar”. However, is it an “off centre” error? The authors of this blog define an off centre error as a coin being struck far enough off centre that some of the design of the coin is missing. In this case none of the design is missing, so despite this coin clearly being struck off centre it does not fit the strict definition of an off-centre error.

Being struck completely out of collar and “broadstruck” the planchet of this coin was free to flow radially outward when struck. Of course this made the coin itself bigger than a standard 20 cent, and it also resulted in changes to the design of the coin as the metal flowed in an unexpected direction. If you’re a frequent reader of this site you’ve probably read the term “fish tailing” multiple times, and that “fish tailing” is one indicator of unconstrained radial metal flow on a coin. Well, this 1966C 20c broadstrike error has about the best fish tailing of the obverse legends that we’ve seen on a coin. You can see how the word ELIZABETH has been affected below:

Note the V shaped indentations at the bottom of the upstrokes of the letters forming the characteristic “fish tail” shape that gives this phenomenon it’s name. This happens as the metal flows outwards in the incuse die elements that form the letters of the legends. Metal in the middle of the upstrokes flows more that that on the outside presumably due to friction with the die surfaces, similar to how a river’s water flows faster in the middle of the river compared with the water near the banks. The difference in the amount of metal flow leads to the fish tail shapes we can clearly see.

This error is a spectacular example from the first year of issue of Australian decimal currency. It was clearly found prior to circulating as it is a lovely uncirculated grade. It has experienced some poor storage at some time during it’s 60 year life as it’s got some sort of PVC or perhaps adhesive adhesions and would benefit from some sort of appropriate restoration by someone with the correct certain set of skills. Despite that, it’s still an amazing coin and hard to improve on if a collector was looking for a 20 cent error to take pride of place in their collection.