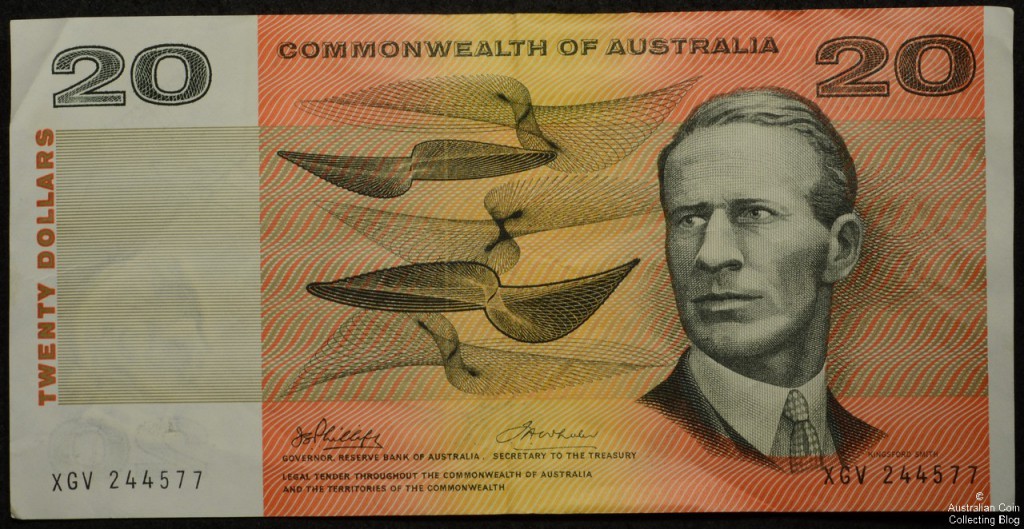 The value of the Australian paper $20 note can be determined when we know 3 things. Whose signatures are on the note, what the serial number is, and the condition of the note which is known as the grade. Firstly though, we’ll identify the paper banknote.

The Australian $20 was first issued in 1966, it was made of paper with red/yellow/black print. It replaced the ten pound note which was of similar colouring. The front shows a portrait of Sir Charles Kingsford Smith with pendulum tracings symbolic of wings, 2 serial numbers and 2 signatories. The back portrays Lawrence Hargrave with his drawings of flying machines and kites. The denomination is shown as ’20’ and appears twice on the front of the note and twice on the back. Early notes form 1966 to 1974 read ‘COMMONWEALTH OF AUSTRALIA’ on the top (see note imaged) and from August 1974 to 1994 this was shortened to read ‘AUSTRALIA’.

Each Australian paper banknote has security features hidden away in the note. Hold your $20 banknote up to the light and in the white space you’ll see a watermark, the profile of Captain Cook which was manufactured in the paper as an anti-counterfeiting measure. The note also has a metallic security thread running vertically through the note which can also be seen when you hold the note up to the light. The note will have an embossed feel. 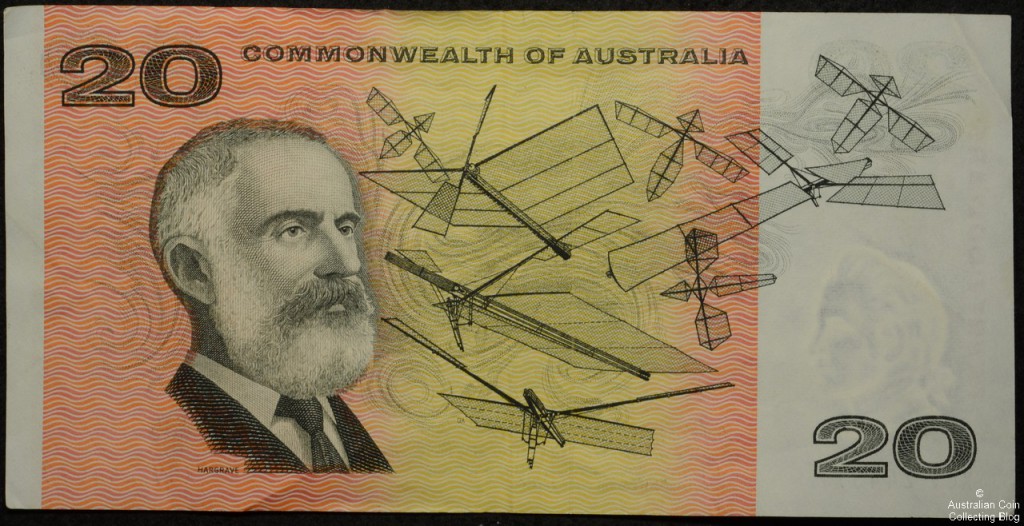 Signatures, of which there are two, also appear on all Australian decimal paper notes. These are the mark of the Governor of the Reserve Bank of Australia and the Secretary to the Treasurer at the time of issue. They have changed over the years and help identify which period the note was issued in. In the paper $20 note series 1966-1994 there were 10 signature combinations.

The paper $20 note was phased out from 31 October 1994 when the new design polymer twenty dollar note was released.

After you have identified the signatures on your banknote then another important factor in determining the notes value is the serial number. There should be two serial numbers on the front of the note and they should match -3 letters followed by 6 numbers. The serial number tells us if the paper note is a first issue, last issue or general issue for that series. It also tells us if we have a very rare star note which is very valuable. Starnotes replaced soiled or damaged notes and were inserted into bundles for accuracy in accounting by the banks. The last digit was replaced with a star or asterisk. Star serial numbers on paper twenty dollar notes are found from 1966-1972 when the practice was ceased.

Error notes are those that should have been replaced with a starnote. There are many many types of errors that are found on notes some of which include mismatched serial numbers, missing print, missing colour, cutting errors and extra paper flaps. These can be quite valuable depending on the type of error and the condition of the note.

Condition is a crucial factor in the value of the paper banknote. A mere bank teller flick or centre fold can devalue the note considerably. In attempts to reverse wear on a note many paper notes have been doctored in some fashion. This includes bleaching, pressing or repairing. This should be carefully considered and factored in if you are looking to purchase a paper note.

These values are updated hourly using New York market prices. Coin values are purely the value of the gold or silver they contain and do not account for any numismatic value.
Prices Last Updated: 00:04 02 Feb 2023